Meghan and I just spent the month of November sailing in Malaysia. Although we had a great time, one of the downsides is that we missed the Thanksgiving holiday with our families and friends ― a first for both of us. We want to now share the story of our international Thanksgiving as an excuse to connect with everyone back home.

Ours was an unconventional Thanksgiving dinner, to say the least. We prepared the meal while underway on a 38 foot sailboat, heeling 20 to 30 degrees the entire time. And we shared the dinner with a Scot, Brit, Kiwi, and Chinaman, minutes before Force 6 to 7 winds kicked off.

Our last week of sailing was spent participating in the Raja Muda Selangor International Regatta, which is a 260 mile, week-long regatta from Kuala Lumpur to Pangkor to Penang to Langkawi (in the Strait of Malacca off the west coast of Malaysia).

Don't let that give you a false impression: while there were plenty of impressive IRC Class 1 boats with professional skippers and crew, we were definitely not a part of that scene.

This was the dominant boat of the Raja Muda, Alive_. It's supposedly a serious contender in the Sydney Hobart Yacht Race according to the internets._

Instead, we were part of a sea school on a 2006 Harmony 38 with an amateur crew competing against four other non-racing boats. Regardless, racing brings out the competitor in everyone and all of us took the regatta seriously. The race on Thanksgiving Day was the shortest of three passage races: a 60 nautical mile passage from the island of Penang to the island of Langkawi.[1]

Lynette ― the victualler of the sea school ― knew we were missing Thanksgiving, so she went to great lengths to obtain traditional ingredients for us before we pushed off. Unfortunately, there was no turkey to be had. But she did manage to find us a roast chicken, some white potatoes, carrots, and onions, and some gravy powder packets. Sailing is often about improvisation. We just had to make do with what we had.

Speaking of which, one of our crewmates was an endearing Chinese fellow who had never been on a sailboat before and was barely fluent in English. His name was... well, no one on our boat knows his name for sure, but it was pronounced something like Jangjee. It was difficult to connect on a verbal level, but I was able to glean that Jangjee really enjoyed photography. Like, if we weren't on a sailboat, I'm pretty sure he would have a giant Nikon hanging around his neck and a selfie stick in his back pocket. Knowing this, I asked him if he'd be willing to document our cooking so I could write a blog post about it. Next thing I know, he's getting Meghan and I to pose with our hands placed on top of each other and coaching us to be more loving for the camera. 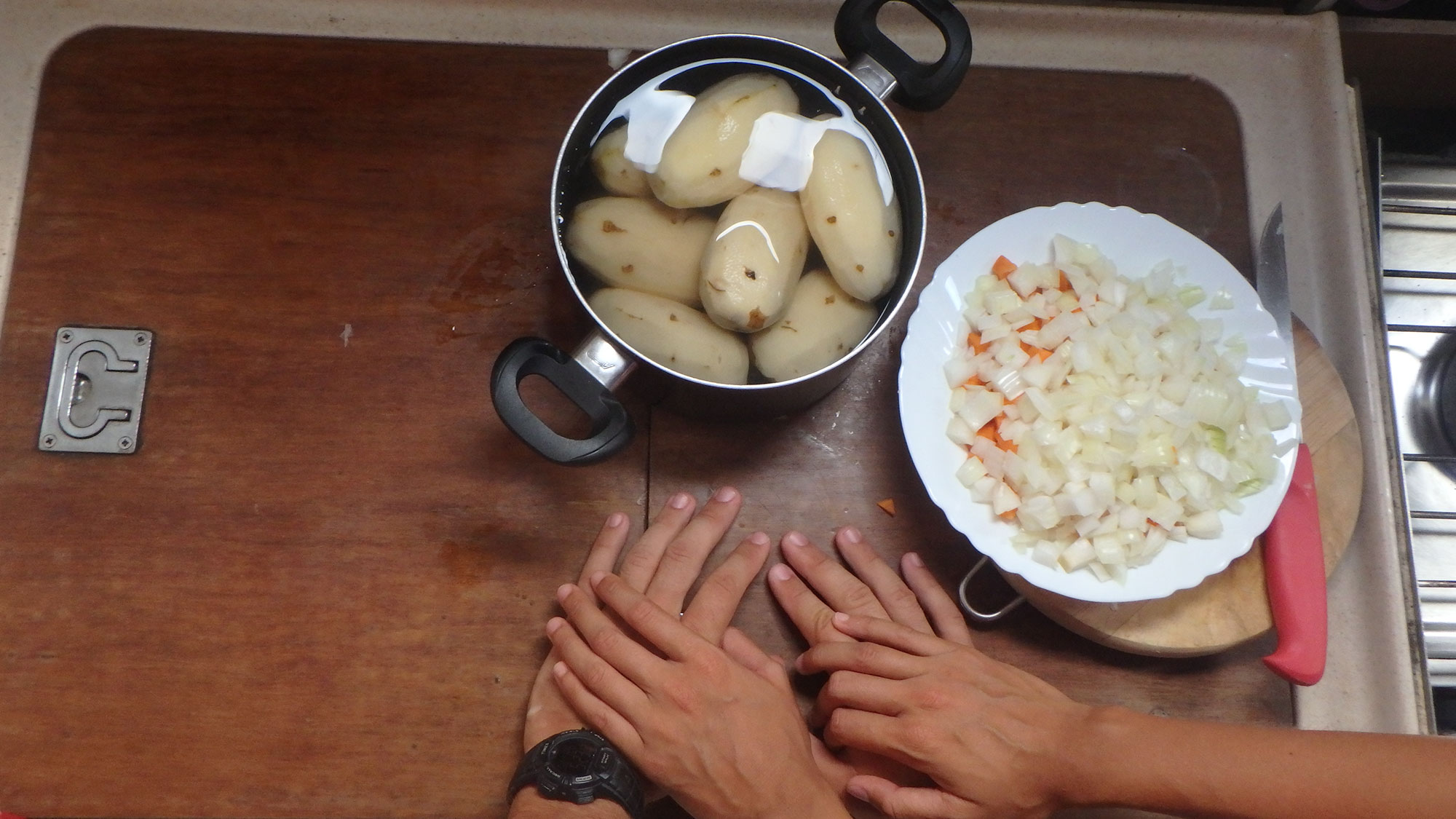 Thanks for the photos, Jangjee.

We started cooking at 5:00 PM, a little bit earlier than usual. This wasn't because we were preparing a Thanksgiving meal, but rather because I was afraid that the seas would start to get rough around nightfall. This was a bold forecast, contradicting the prevailing weather pattern we experienced consistently throughout our Malaysian sailing experience. The pattern went like this: weak wind in the morning; a seabreeze in the early afternoon; a lull at dusk; and then a land breeze for a few hours.

I had been watching a weather app called Windfinder for weeks and on Thanksgiving Day it made an unusual prediction that the wind would pick up to over 20 knots around 8:00 PM, instead of dropping to virtually nothing as was the norm. These apps have questionable accuracy, but such an outlier prediction left an impression. As 5:00 PM rolled around and the wind was already blowing harder than usual, we decided to start cooking early because it looked like this forecast might actually be right.

First, we peeled and chopped the vegetables. 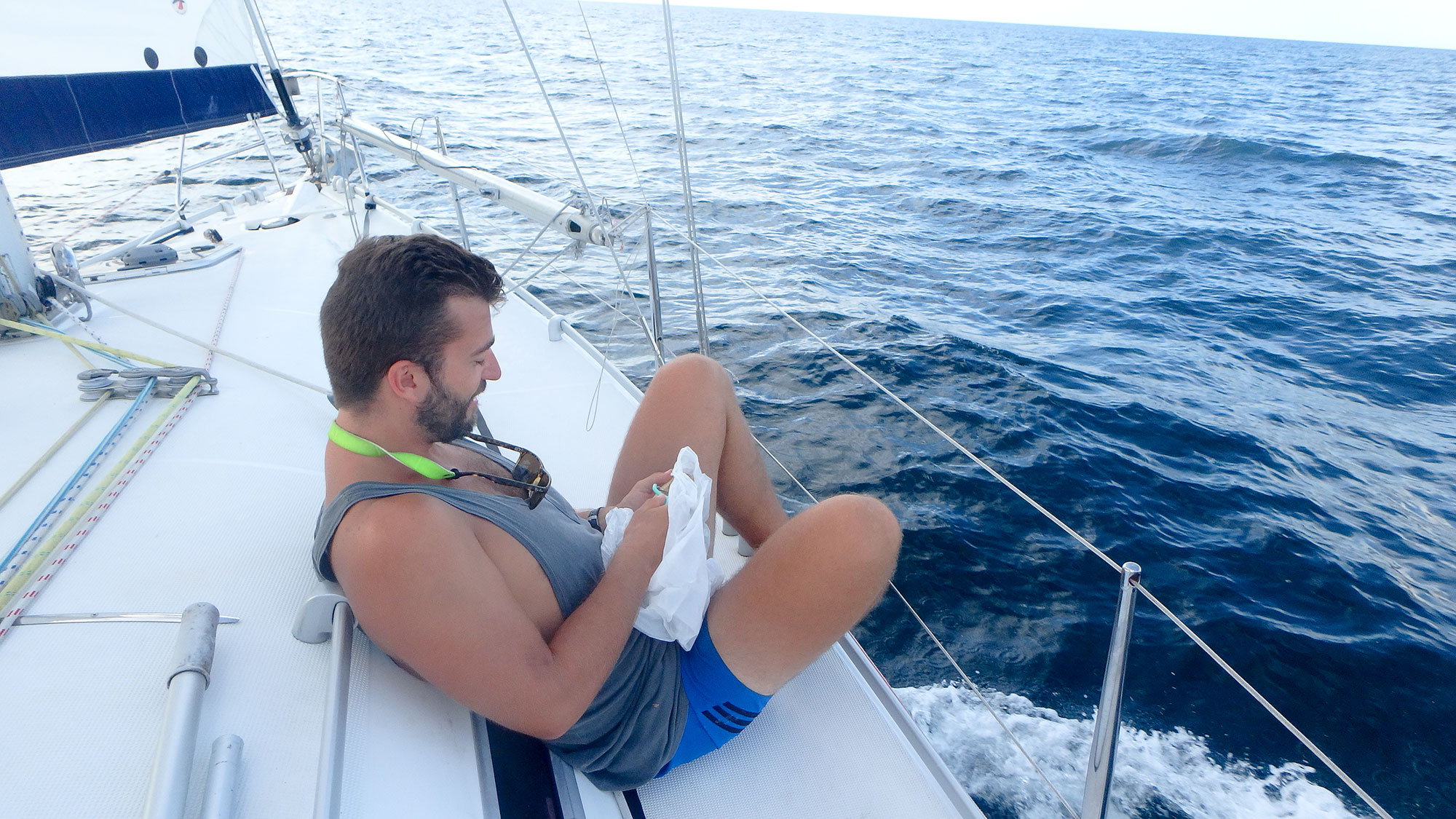 I wanted to minimize time below to prevent potential seasickness, so I peeled potatoes on deck 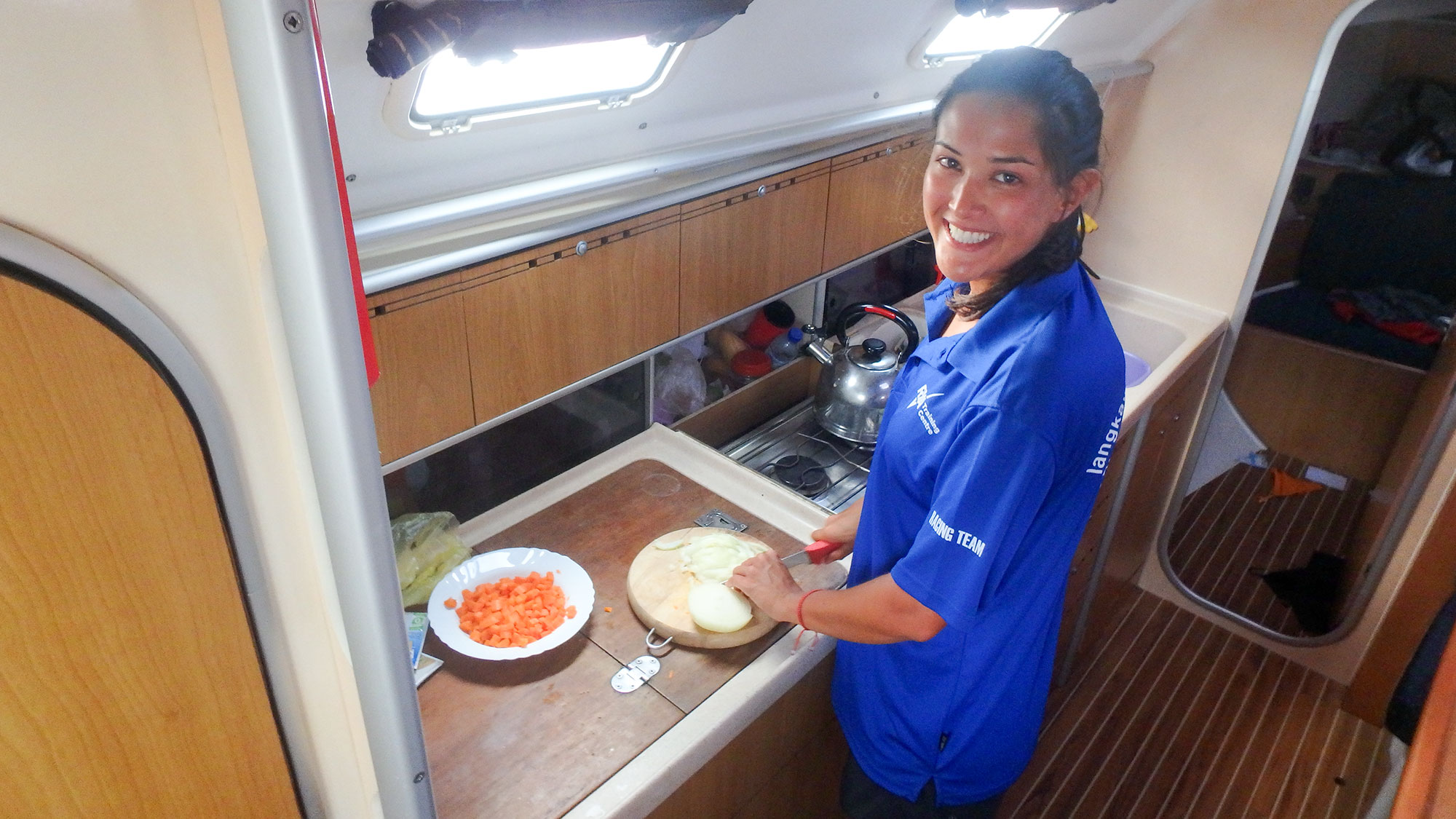 Next, we browned the onions and carrots on the stove. 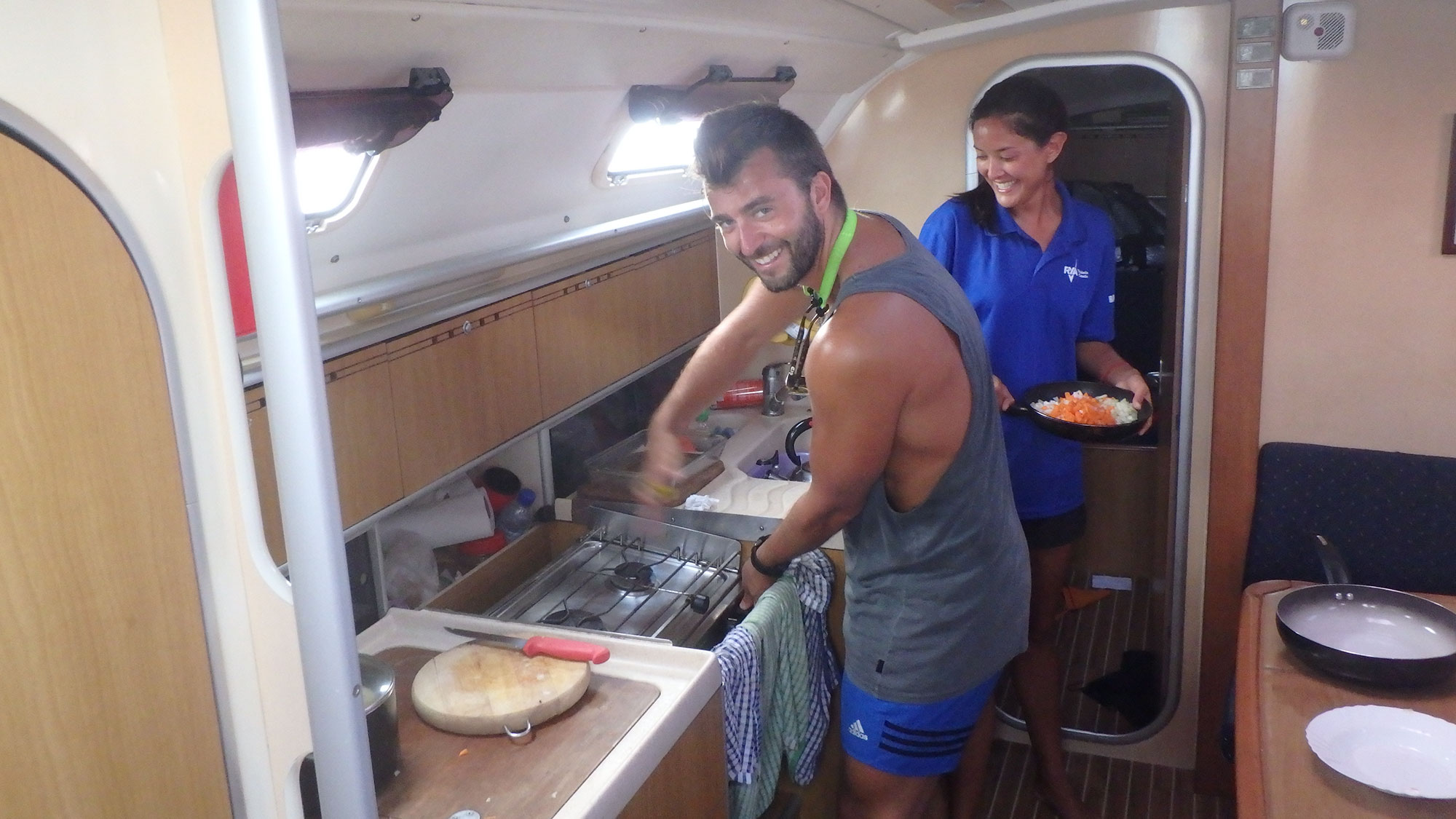 Clearly, Jangjee was trying to get us to do something ridiculous while I was lighting the stovetop, hence our laughter. Separately, you can start to sense the gradually increasing heel in these photos by the gimballed stove.

I had no internet access to look up a recipe and no celery, broth, stock, or bouillon, so I had to completely wing it on the stuffing. 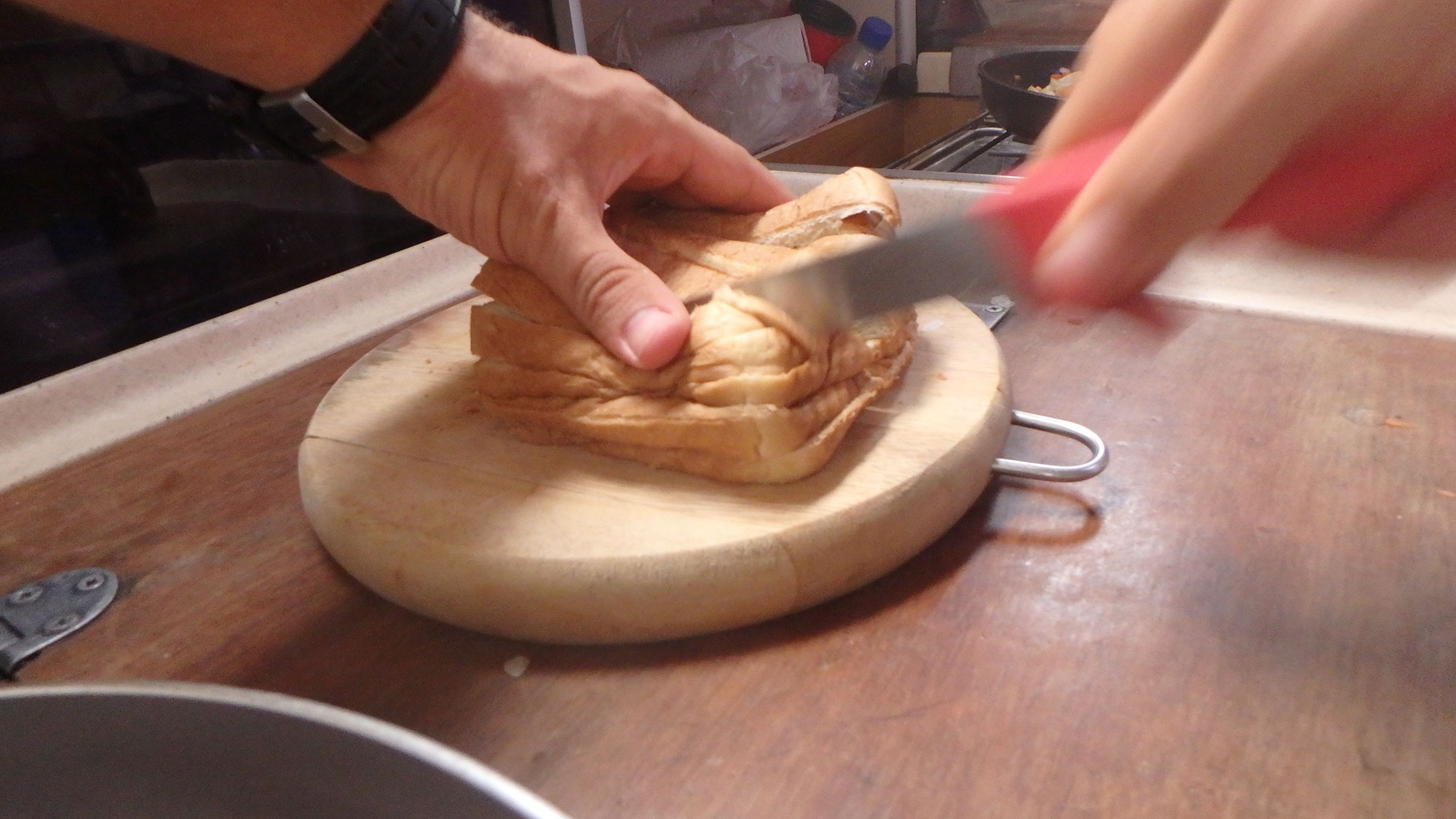 I dried the bread cubes in a pan on the stovetop. For seasoning, we found a bottle of dried mixed herbs and substituted a gravy packet for the broth. 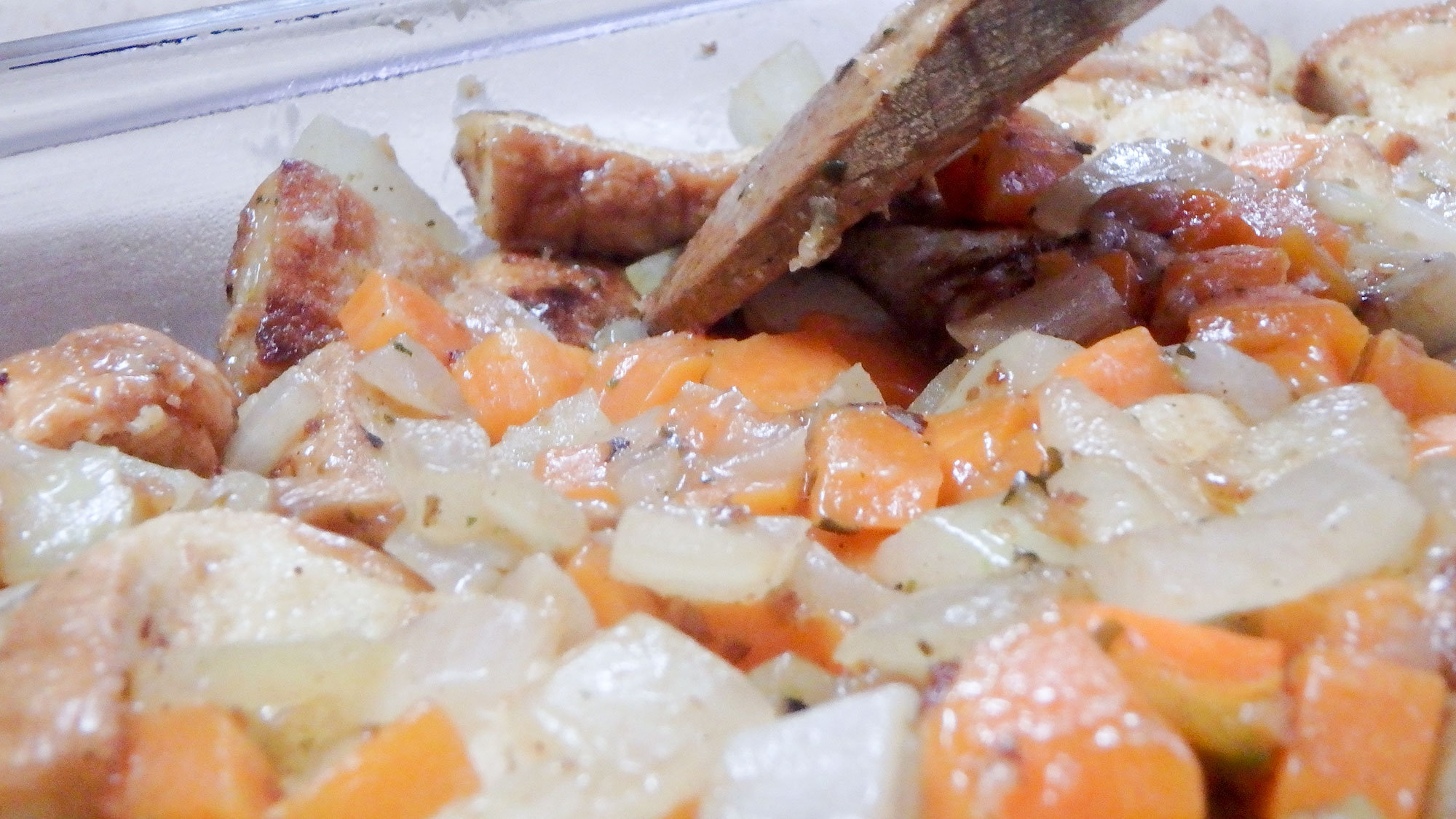 One of Jangjee's artful shots: stuffing is mixed and ready for the oven.

We boiled the potatoes while the stuffing baked. 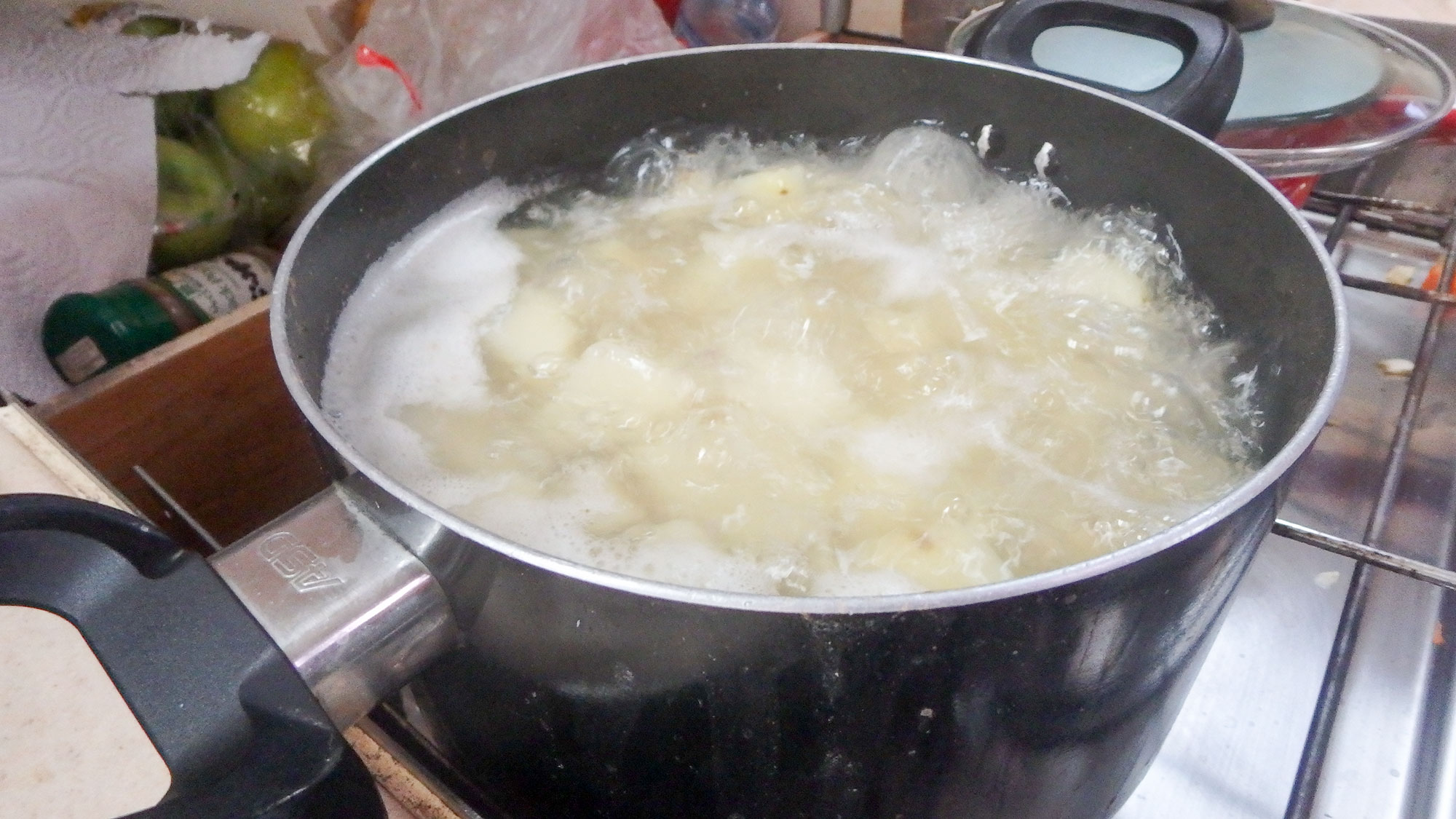 Then we mashed. After about 20 minutes in the oven, the stuffing looked ready. I was really worried that our Macgyvered dish would go immediately into the rubbish bin, but to my delight, it tasted surprisingly like normal stuffing. 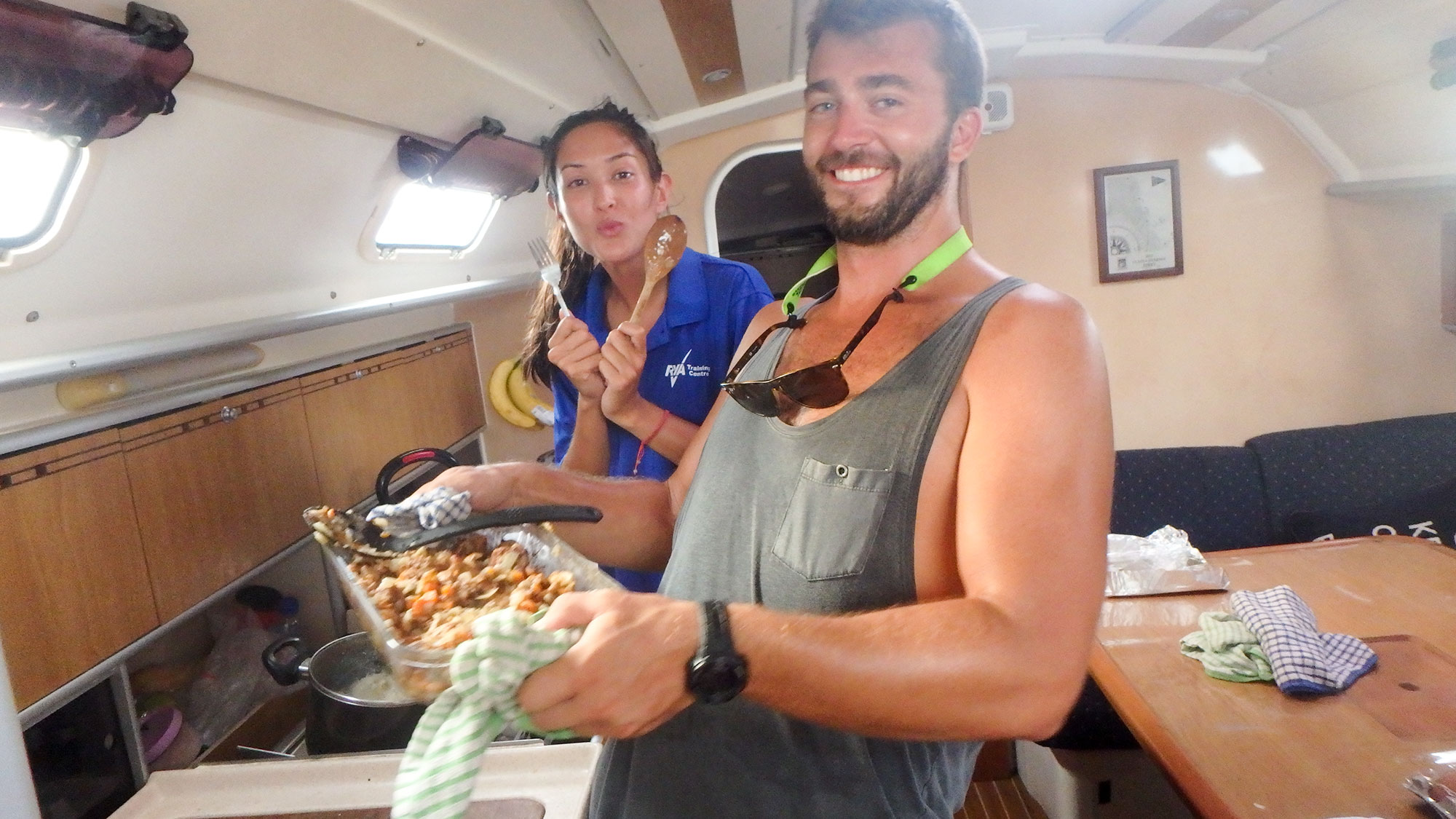 All we had to do now was heat the chicken, reconstitute the gravy, and our Thanksgiving meal was ready to be plated. 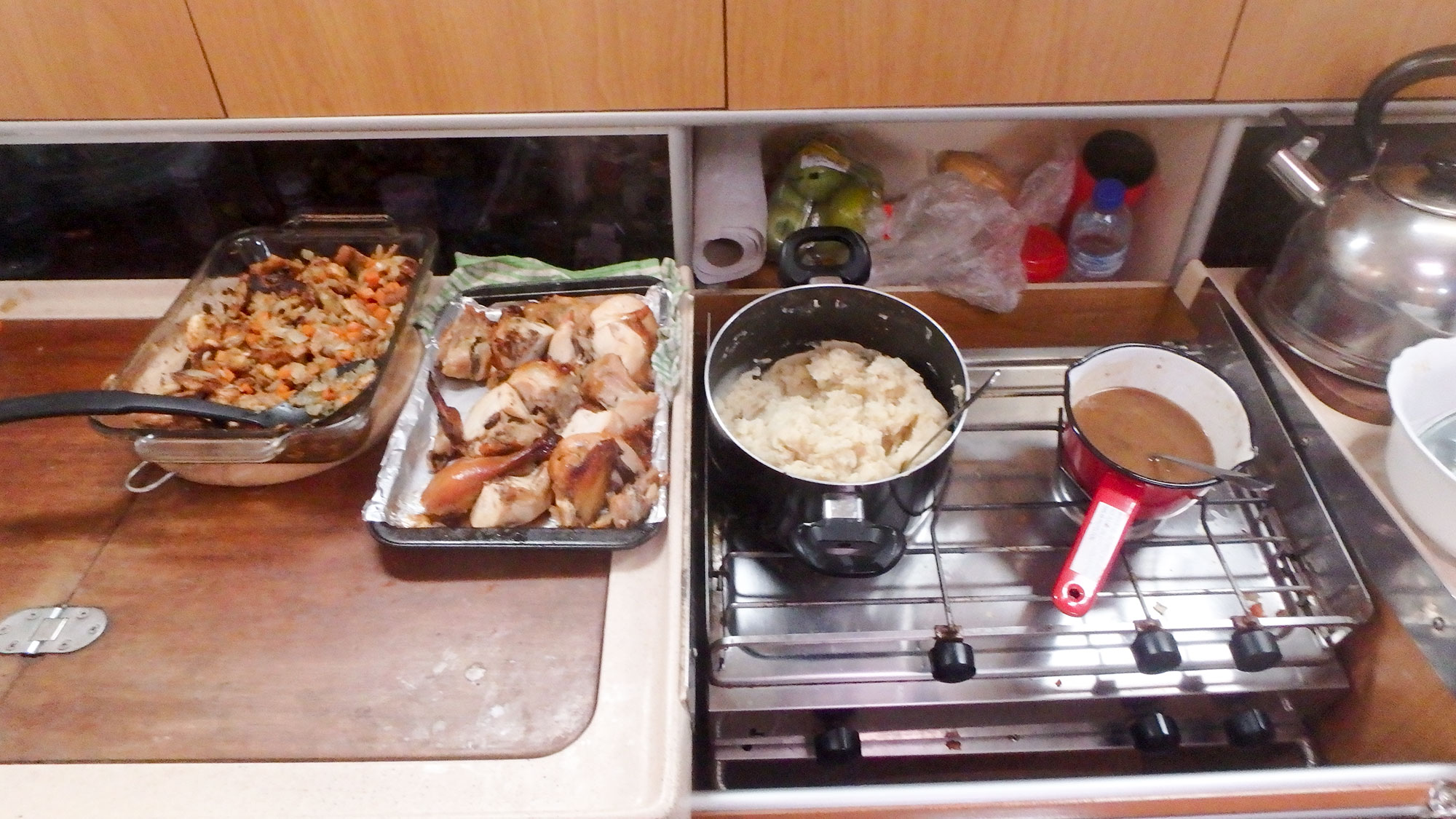 It may not look like much in the scope of Thanksgiving dinner, particularly without a roast turkey, but the act of preparing this meal meant a lot to us given that we were missing our favorite holiday back home. It's also not that easy to cook something like this in the middle of a regatta, so we were quite pleased. 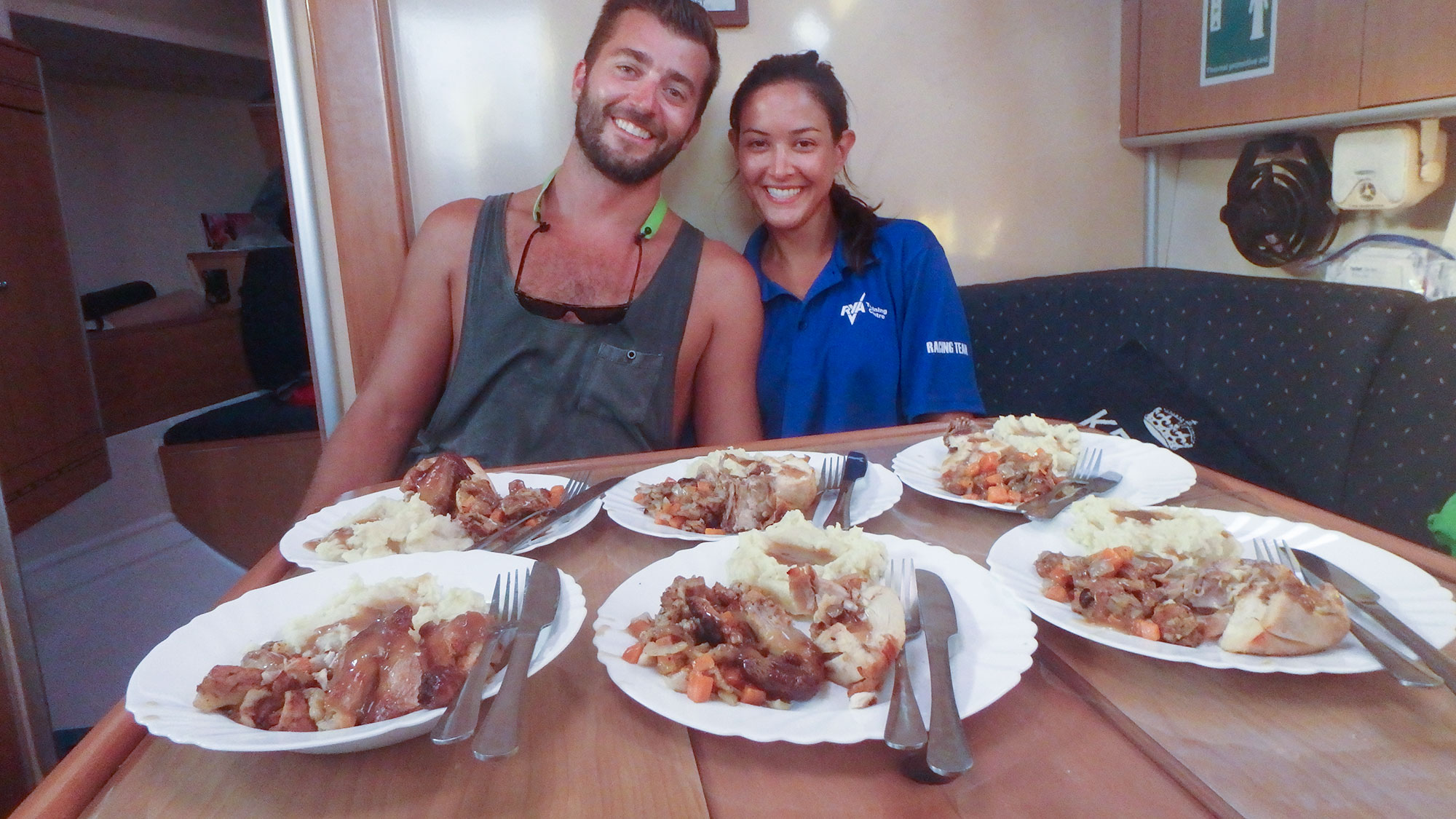 We plated things up and ate on deck with our international crewmates, none of whom had ever officially celebrated Thanksgiving before. It was fun to share this tradition with others, particularly because it is my favorite holiday. 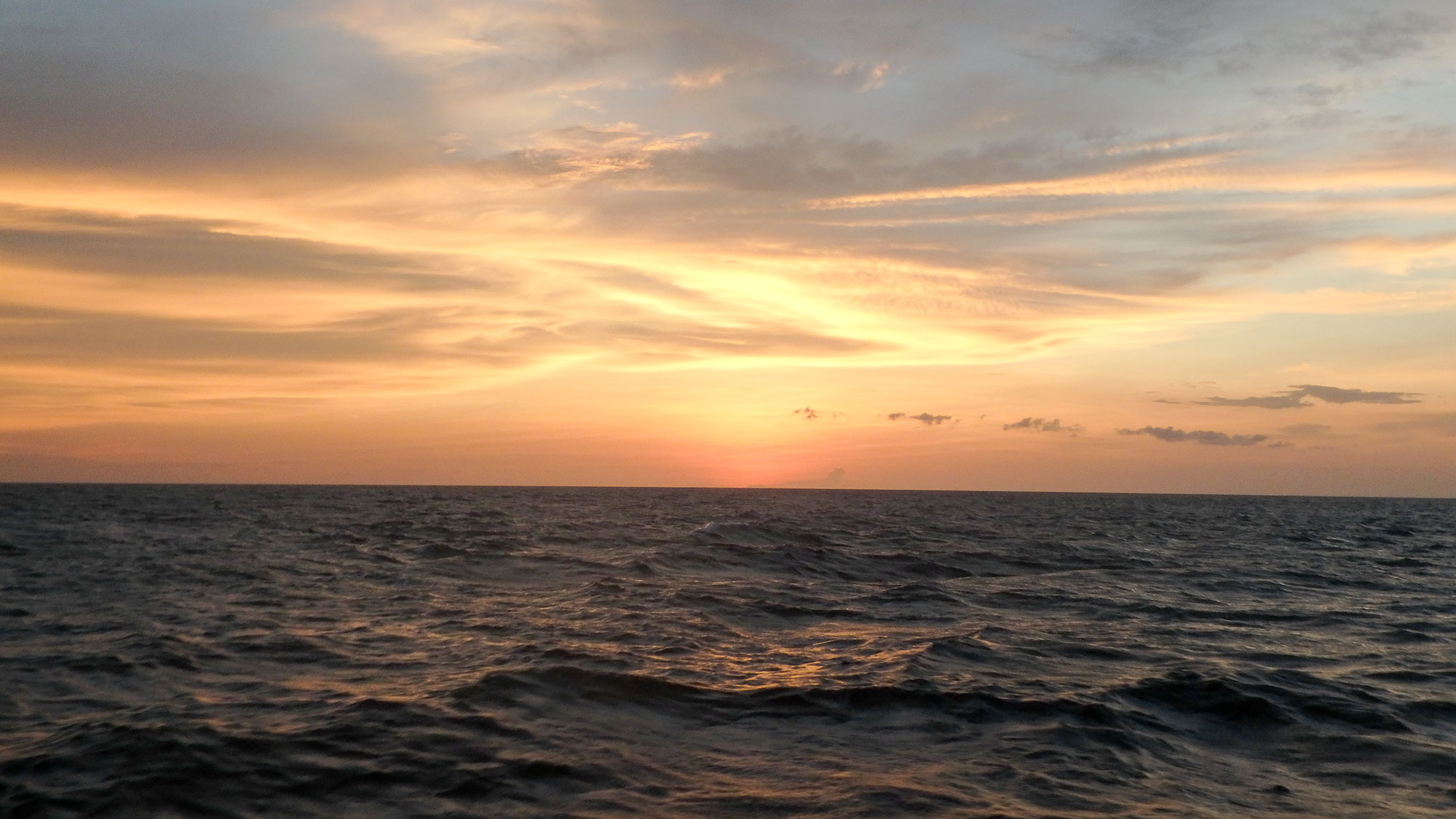 We finished just in time to catch the sunset while eating

We were also just in time to eat before things got crazy. I snapped this fuzzy shot of the windmeter as we were handing up plates. 24 knots apparent, close hauled. 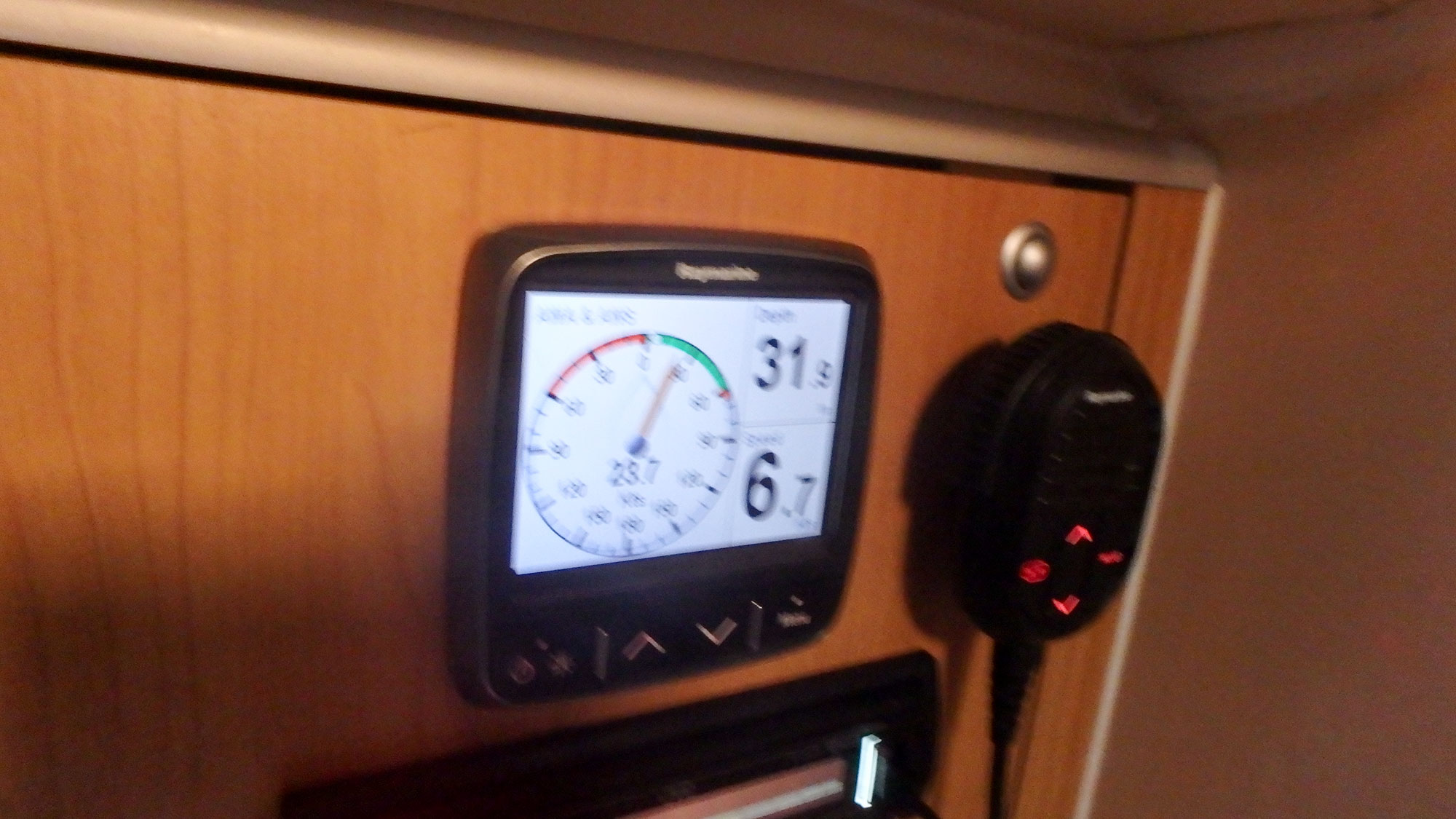 No more than ten minutes after we finished eating, the wind increased to the point that we had to think about putting a reef in (which was much later than usual because we were racing). The wind proceeded to blow for the rest of the night at a steady 25 knots, gusting frequently into the mid-30s. These were by far the highest winds we encountered in all of our time sailing in Malaysia. It was perfectly manageable, although Meghan got a little scared, exacerbated by some racing excitement and residual paranoia from our previous passage.[1:1]

As the weather picked up, we thought we heard a mumbled "mayday" on the VHF. Several minutes later, we picked up a clear broadcast from one of our sister vessels that they were responding to a distress call. We then noticed an emergency flare on the horizon behind us. It turns out that the leading boat in our Class 6 ― a barebones Contessa 26 with carbon fiber sails crewed by the Malaysian Navy ― had dismasted in the gusty conditions. 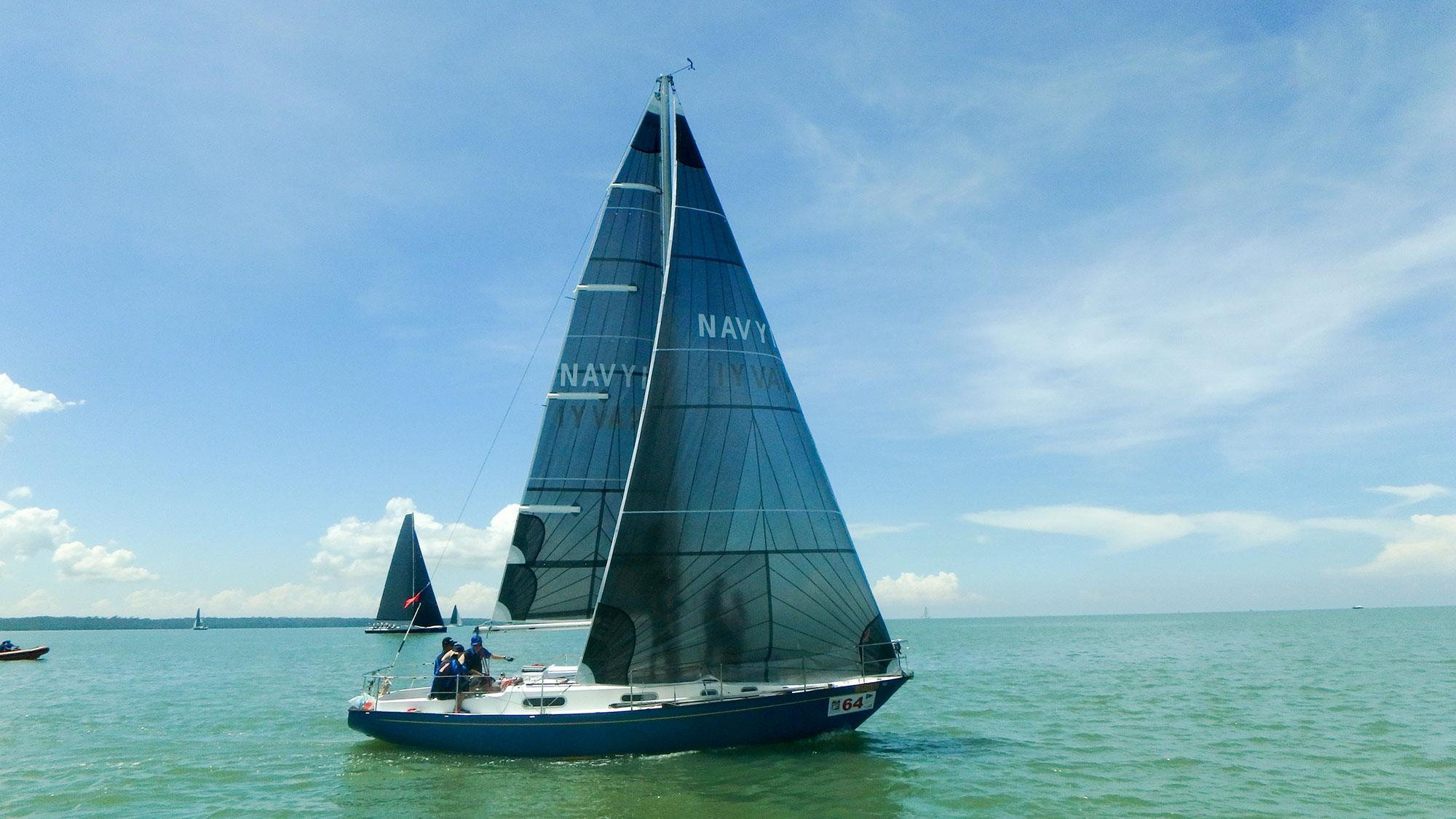 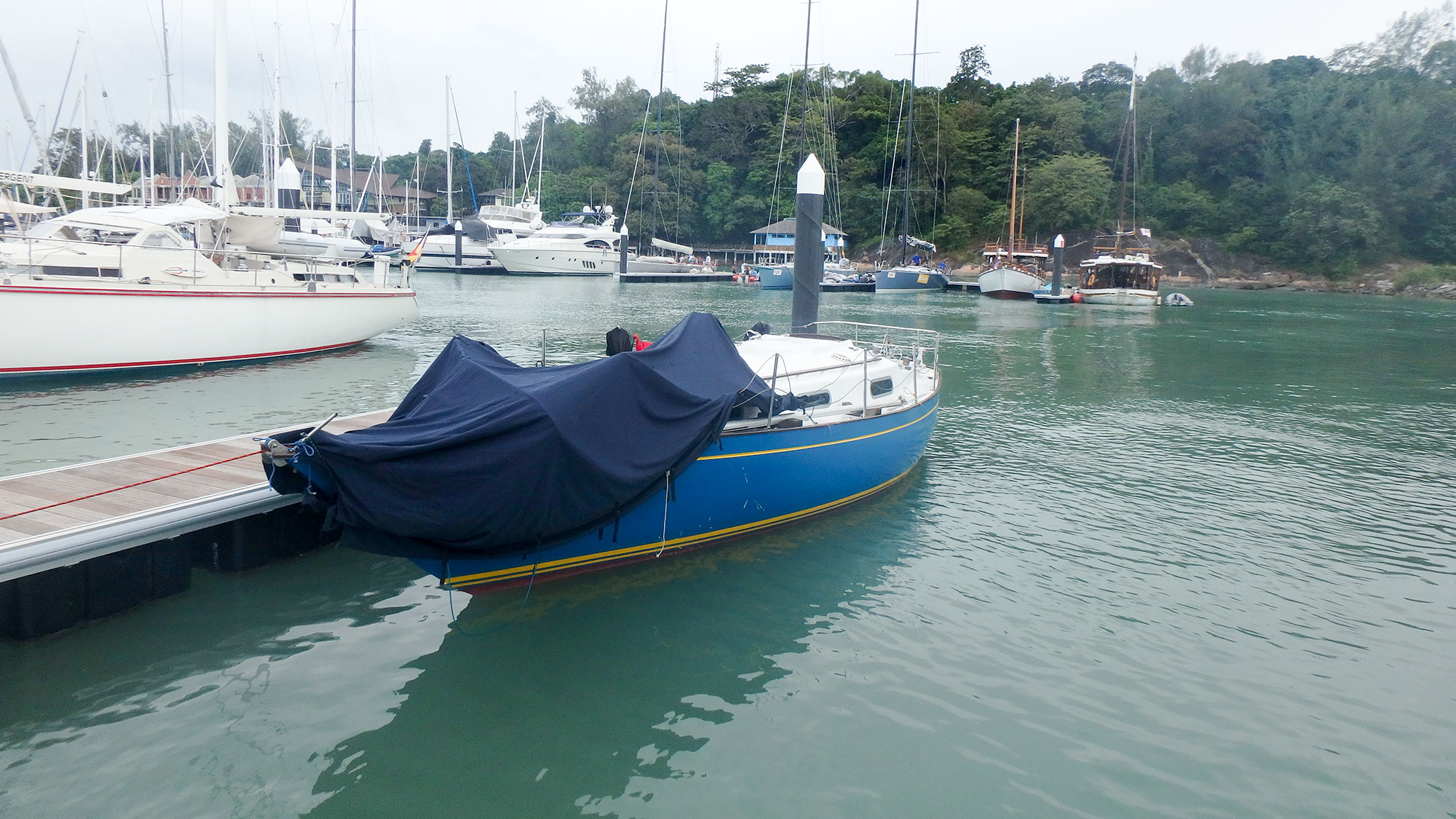 This is the Navy boat after losing its mast. (An Amel Super Maramu 2000 in the background, for those of you who know about my interest in the Amel SM2K.)

As you can imagine, the whole incident created a lot of regatta excitement, with all kinds of VHF chatter and relaying during the night. It also scared the bejeezus out of Meghan. Fortunately, no one was hurt. Another sailboat in the back of the race towed the disabled vessel to Langkawi.[1:2]

As for us, we finished the Thanksgiving passage in slightly less than ten hours, which equates to an average speed of approximately 6 knots ― very fast for a cruising boat of this size. Thankfully, the marina pub was still open after we tied up around midnight, so we drank some beers, calmed the nerves, and called our families to say Happy Thanksgiving. It was a memorable one indeed!

Meghan and I just spent three months in Canada, living in a small town in eastern British Columbia called…

Where have we been?! Chiang Mai, Thailand

Sorry that I've been a little slow with blog posting. I'm going to release one post per destination in…