Sorry that I've been a little slow with blog posting. I'm going to release one post per destination in the upcoming weeks. Here's a sneak peek of the places we visited since meditation retreat as of October 25th:

As you might have picked up from our extended five week stay in Koh Samui, month-long fitness boot camp [link], and 10-day meditation retreat [link], we really like Thailand. However, the expiration of our 60-day visa was drawing near once we emerged from meditation.

We only had 7 days left and before we departed Thailand, we had to see Chiang Mai for ourselves. We'd heard so many great things about it and figured we should give Northern Thailand a peek since we were skipping Bangkok.

Chiang Mai is an outdoor adventure land and the second largest city in Thailand, so there was plenty to do to keep ourselves busy.

Since Chiang Mai was our last stop in Thailand, at least for now, we had to check off a bucket list item. It was time to finally take a Thai cooking class! After developing a strong love for many Thai dishes, we were determined to learn how to cook our favorites for friends and family once we get home! We have three favorites in particular and we had to hunt around for a cooking teacher that would teach us all three with no exceptions: pad thai, massaman curry, and mango sticky rice. We could live on this. 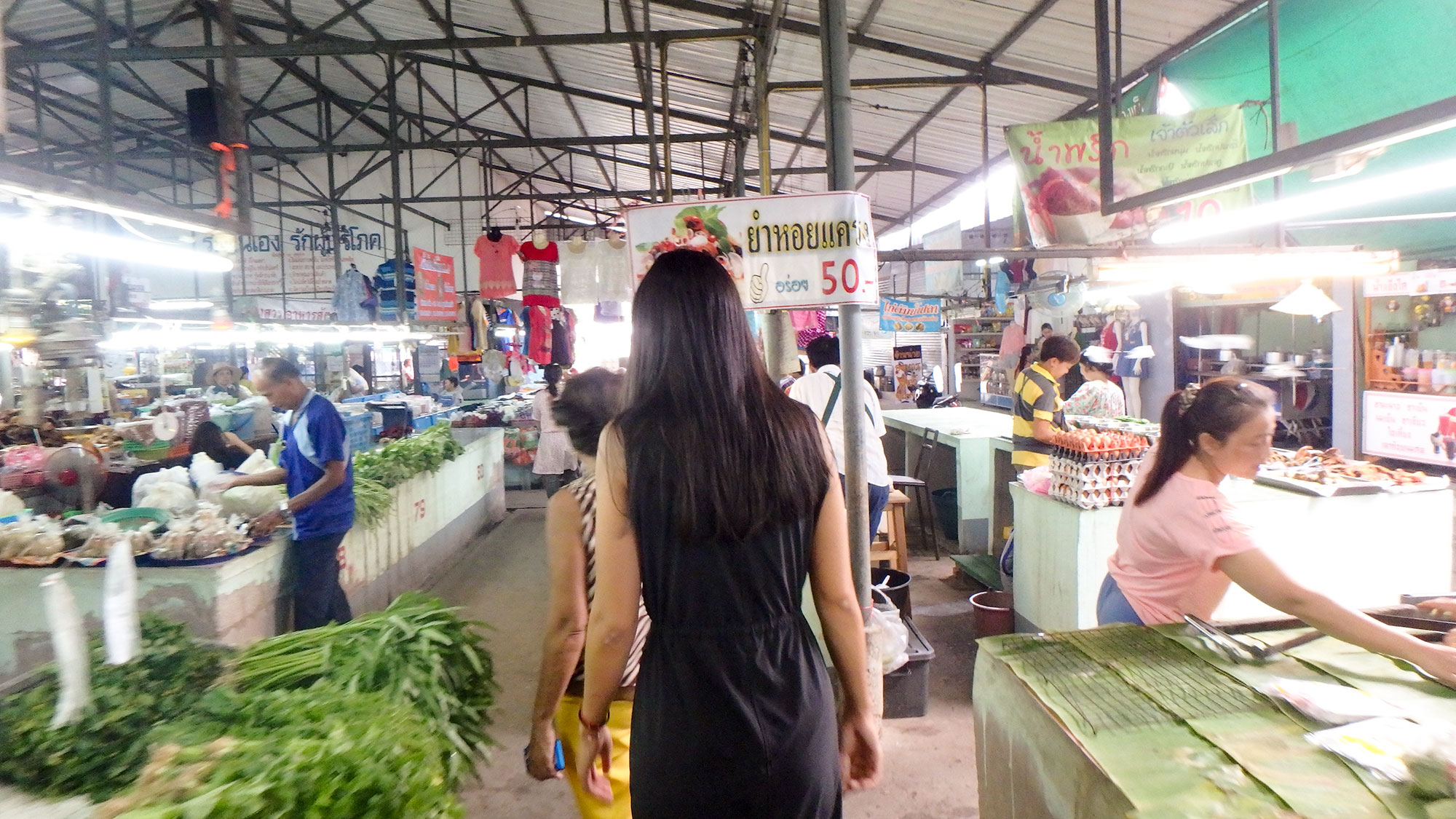 Now off to our instructor's home cooking school to fry up some yummy goodness. 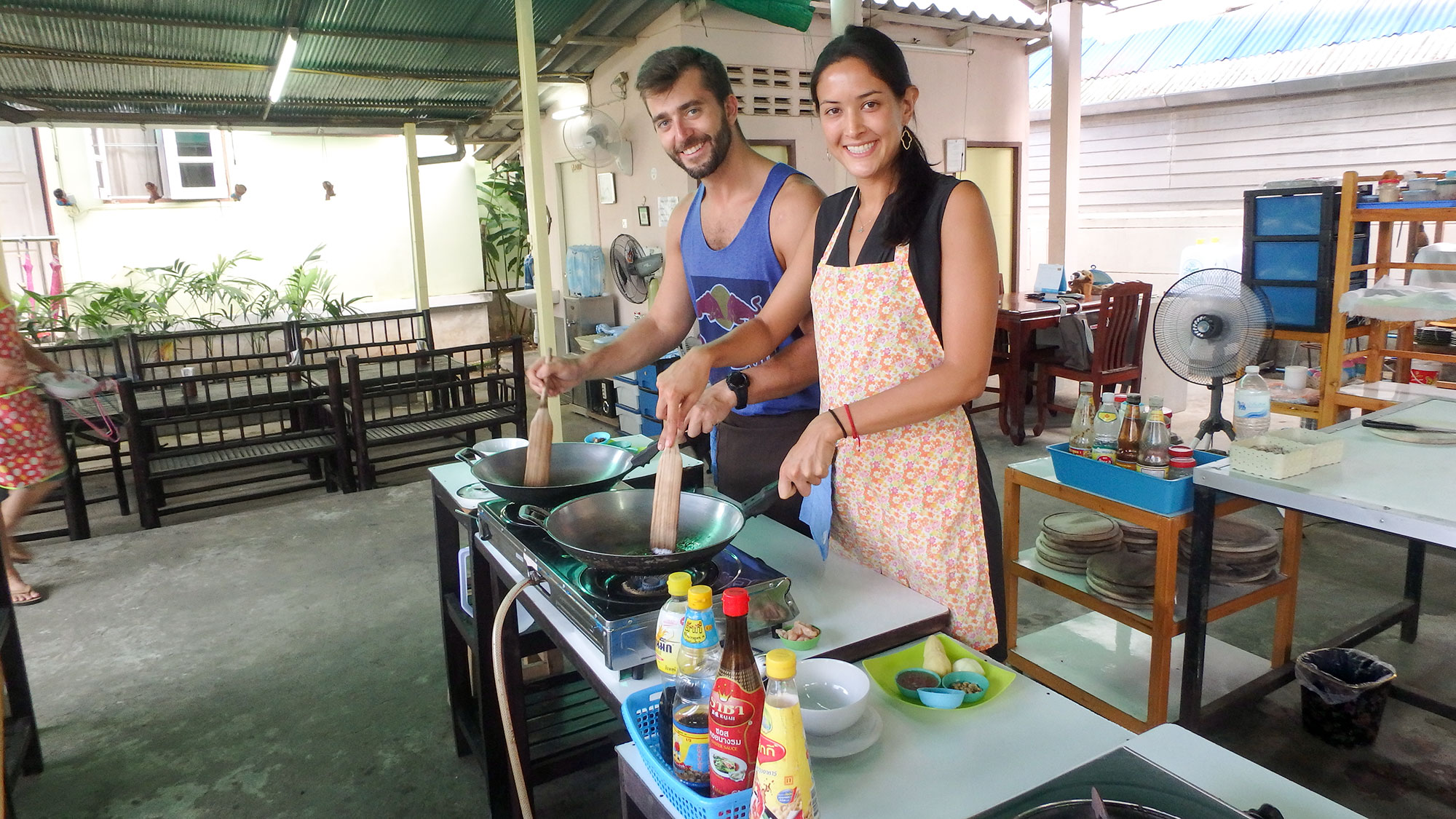 We whipped up a number of dishes in no time, and oh did we enjoy them! 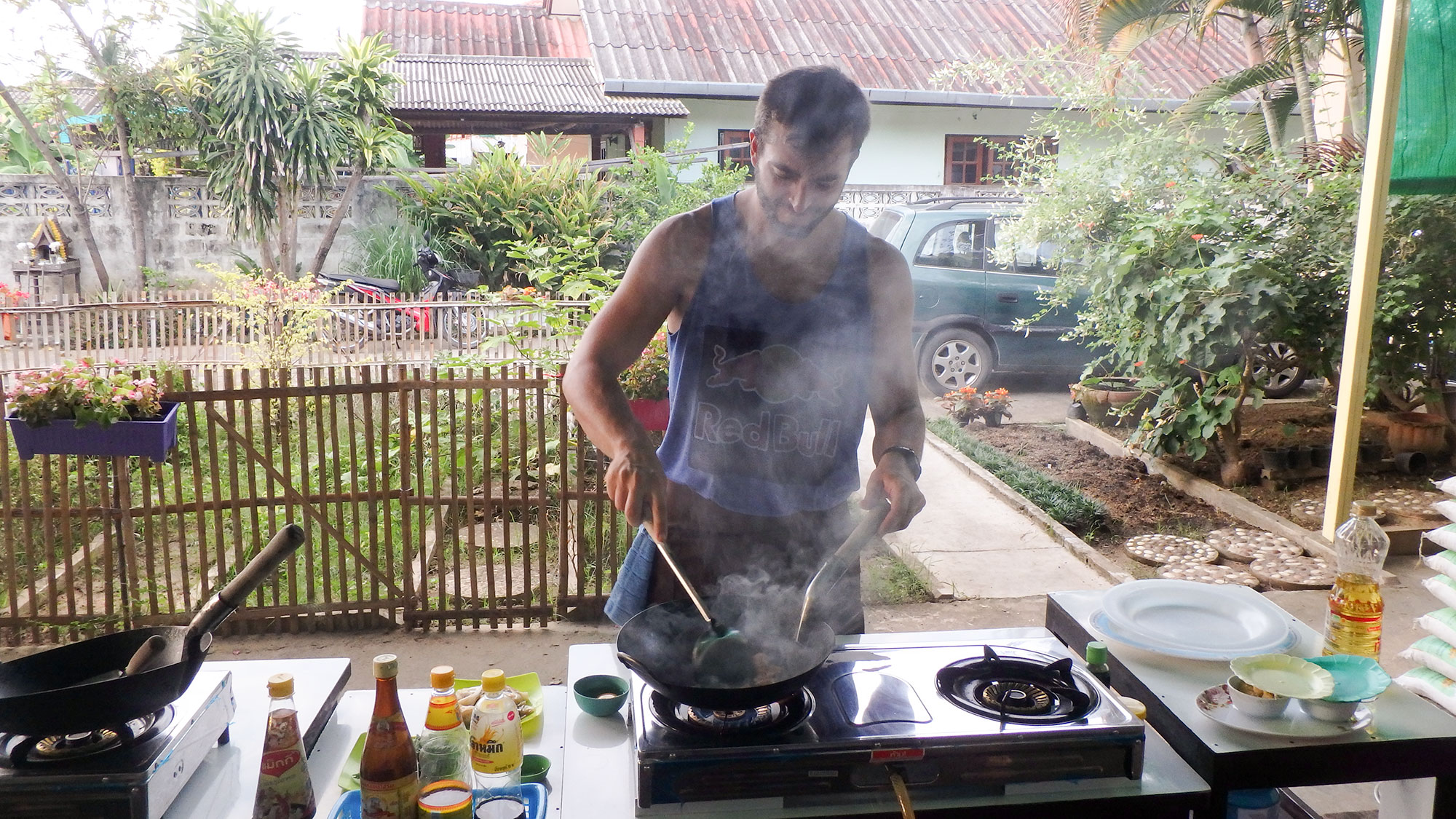 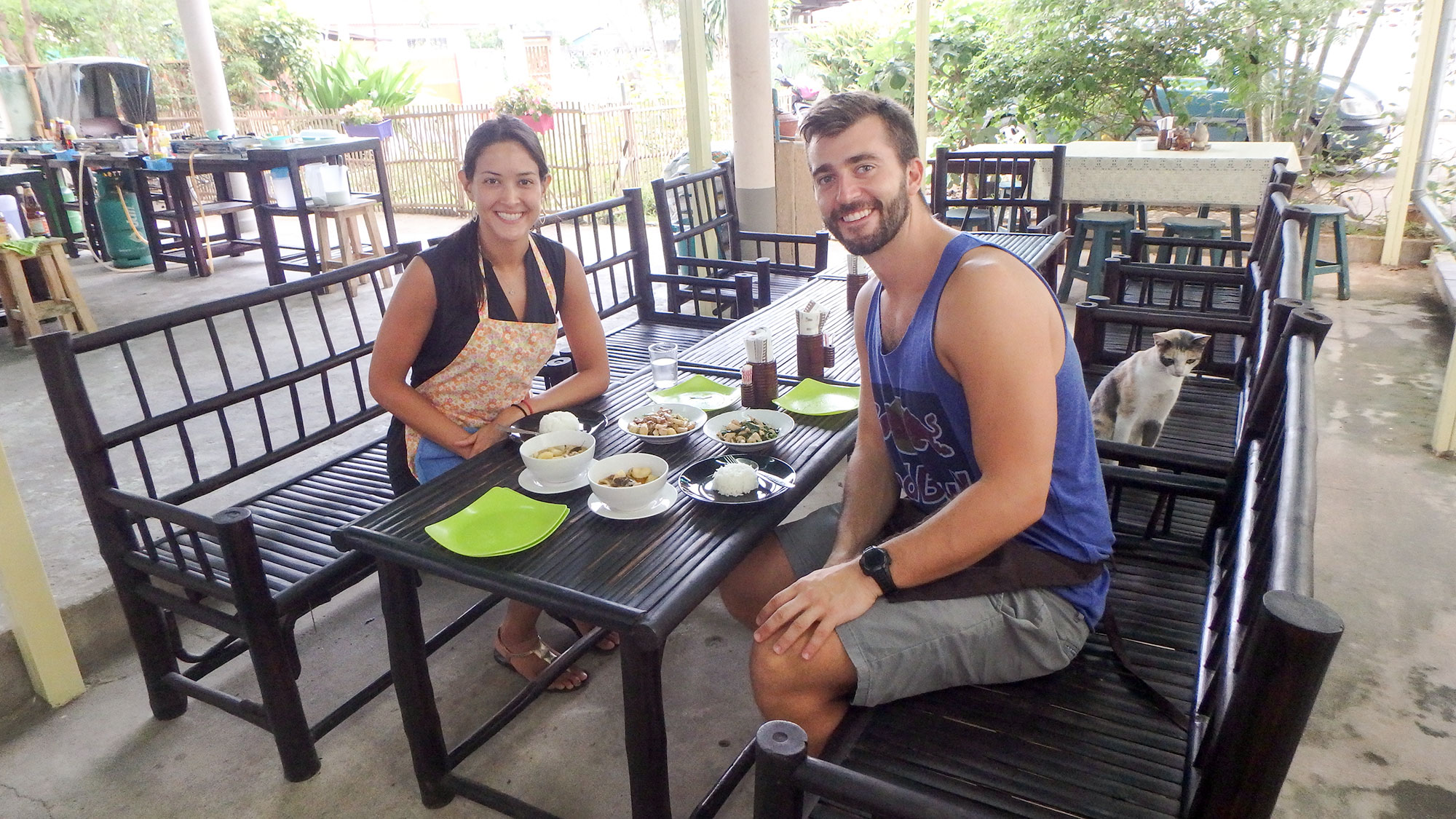 Dan Commentary:
Massaman curry is incredible. I had never heard of it before Thailand. It's like spicy peanut butter. 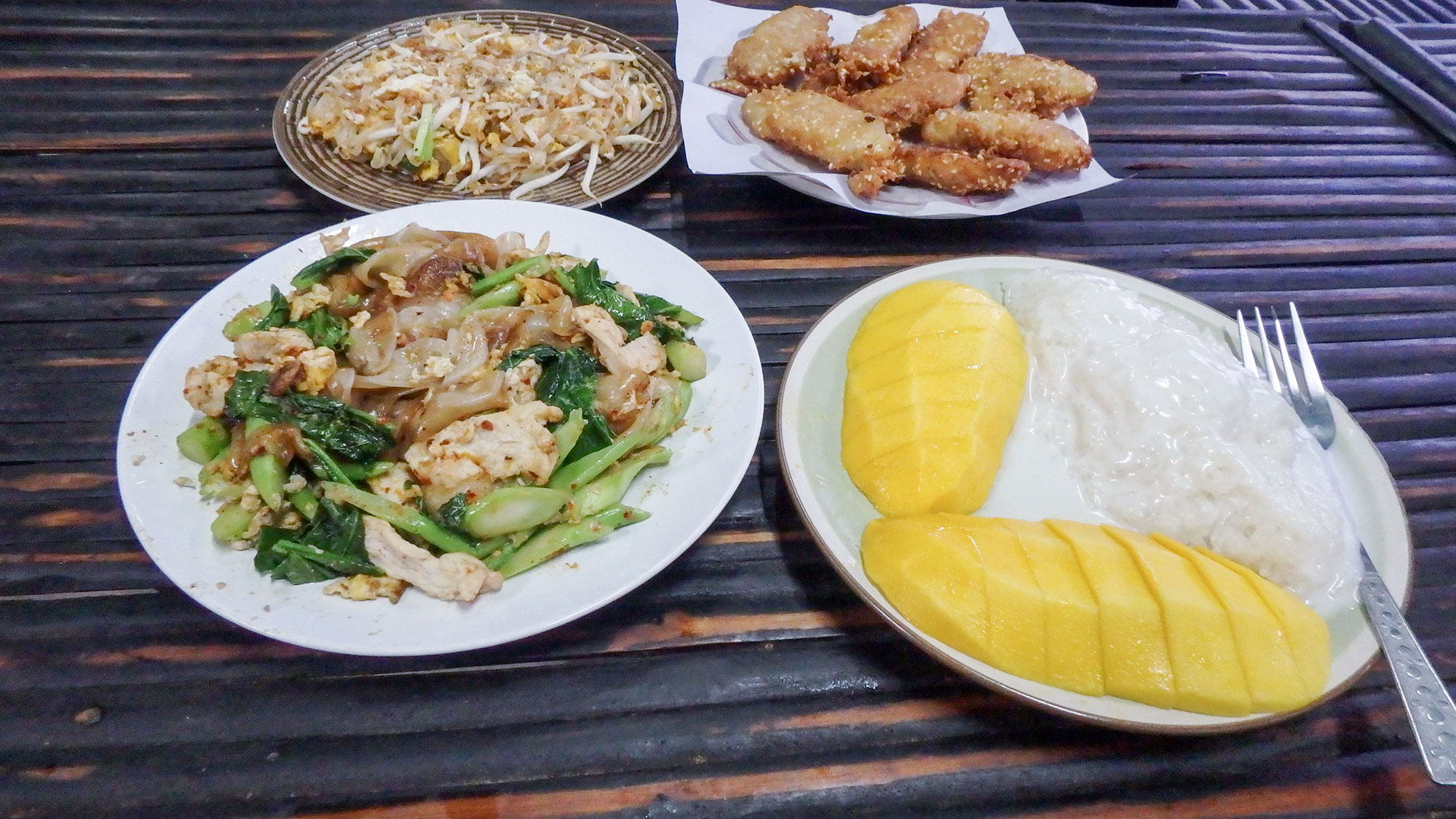 Chiang Mai is known for its beautiful landscapes and mountainous terrain. It's also the home of Asian elephants! Ever since I was a little girl and found out that my brother got to ride elephants in Taiwan (where my mom is from) before I was born, I've always wanted to go for an elephant ride. Elephants are such majestic, enormous creatures that it seemed like one of those things you have to do in a lifetime. So we signed up to spend a morning with the Elephants at Ran-Tong Elephant Save & Rescue Centre. They had a great mission to save and care for elephants that have been victims of cruel treatment while working at logging sites and the like.

Dan was a little less excited than I was to see and ride the elephants, but once we got there he was just as wide-eyed as I was! They are amazing creatures, so giant yet so gentle. 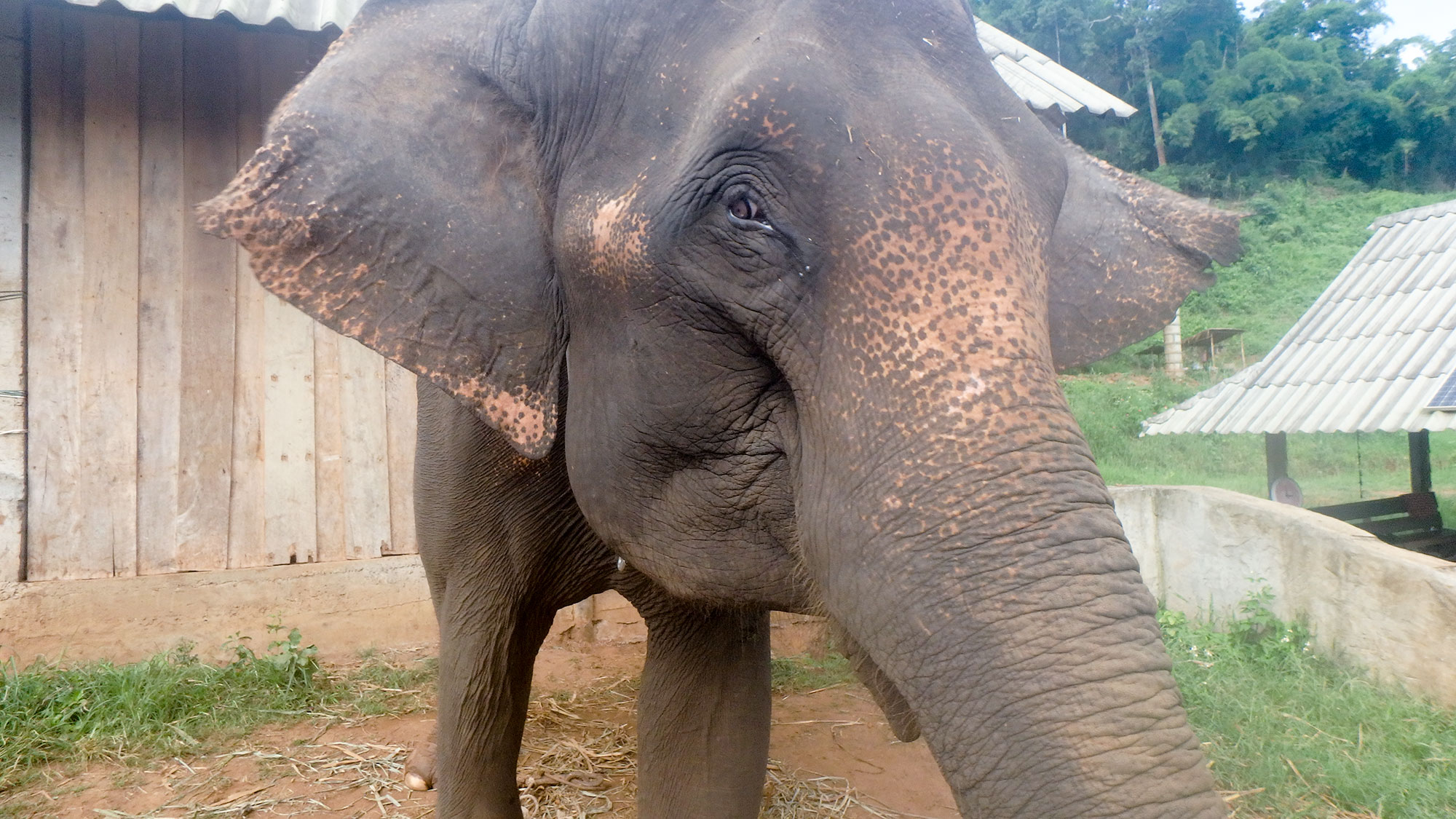 Hello Chom! She was our riding partner for the day.

We had a chance to meet the elephants and feed them. We were given some sticky dried tamarind which the elephants ate right up. Our tour guide explained that these big guys ate about 200-300 kilos of food a day! Ran-Tong has to get food from farmers around the area because they can't possibly meet that demand themselves. 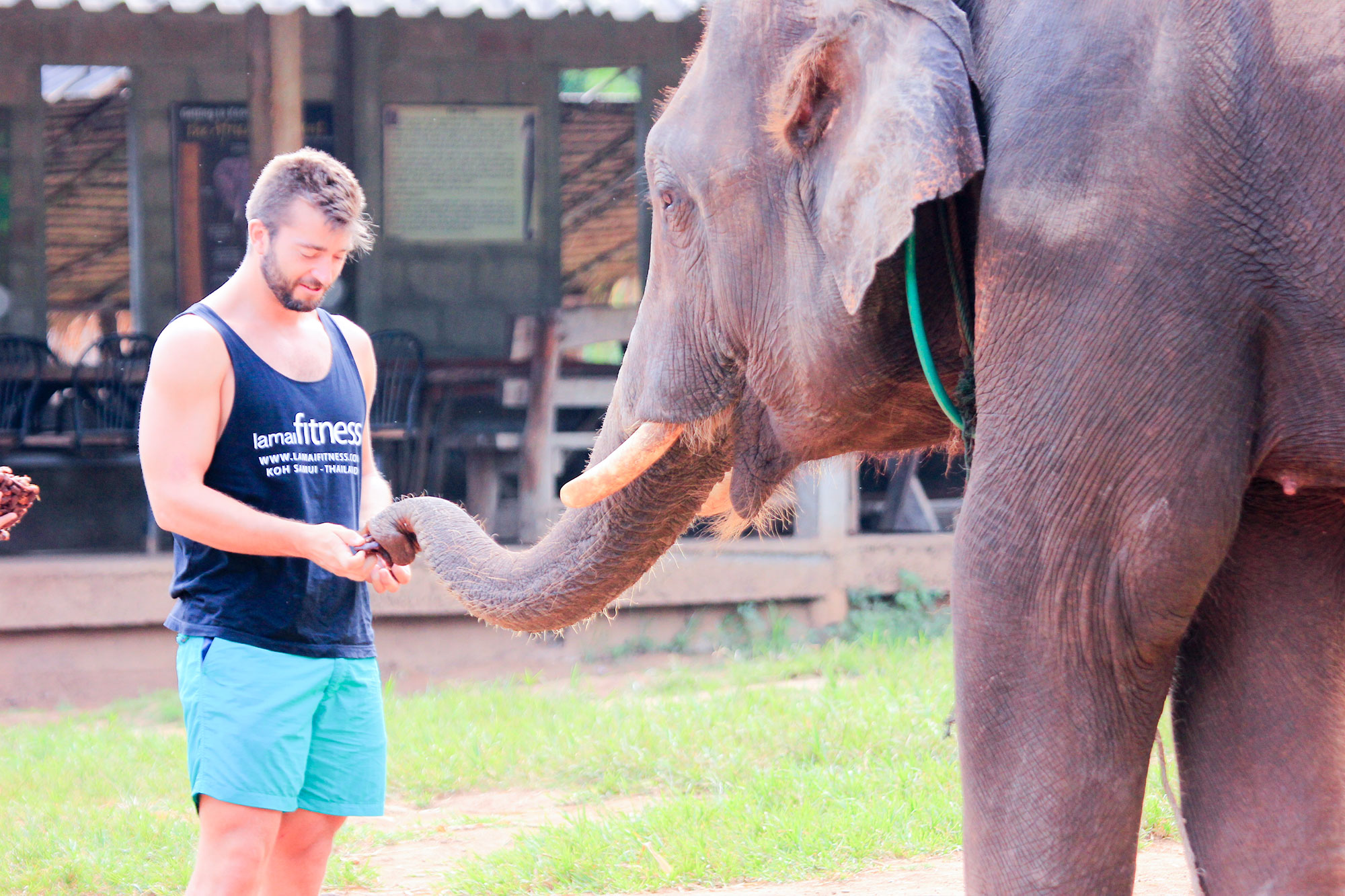 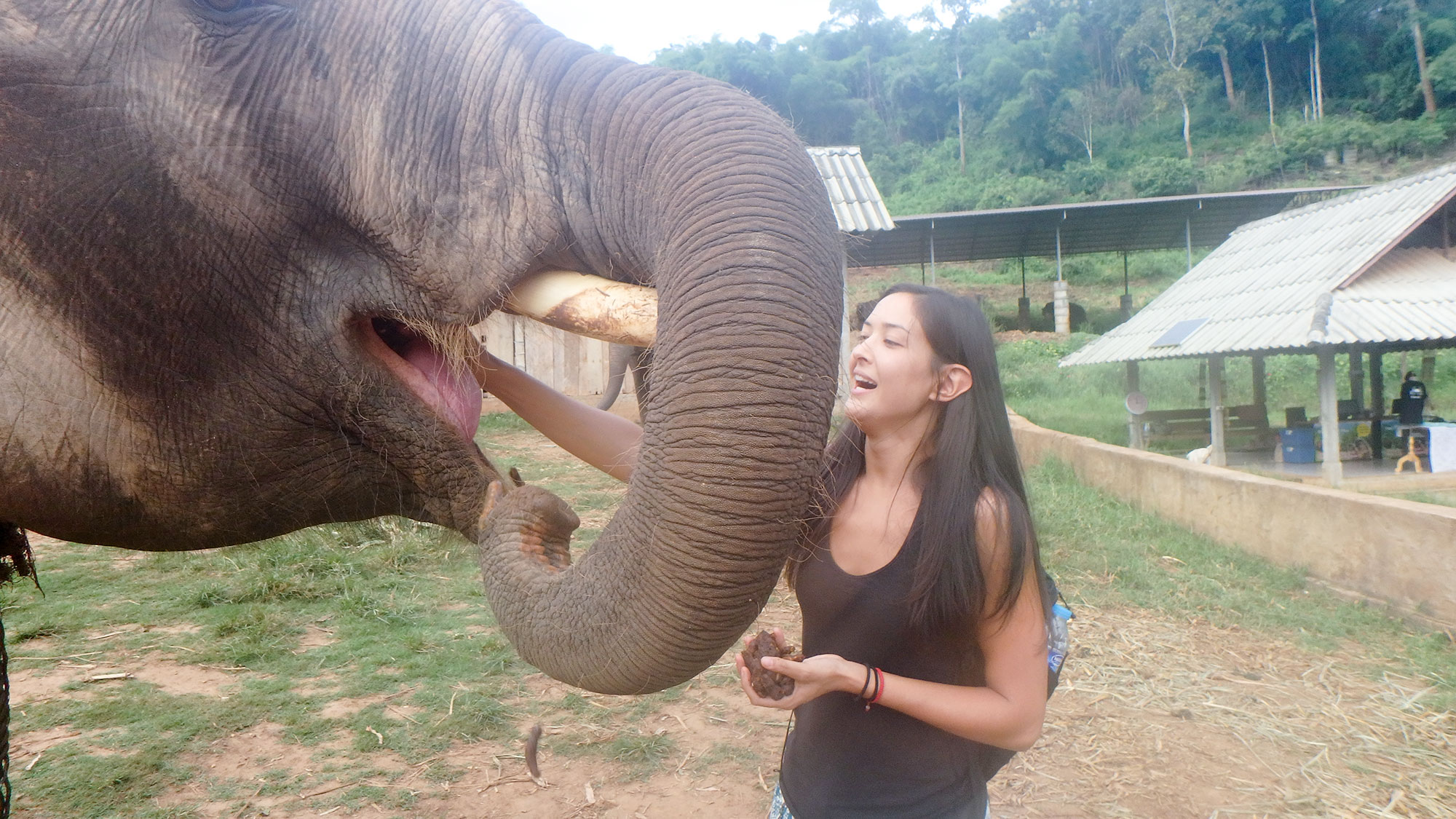 Ah the tongue is so squishy!

Next, we had to change outfits to traditional Thai farmer-style outfits. We weren't exactly sure why we had to change, but we found out later... Now we were really ready to go! 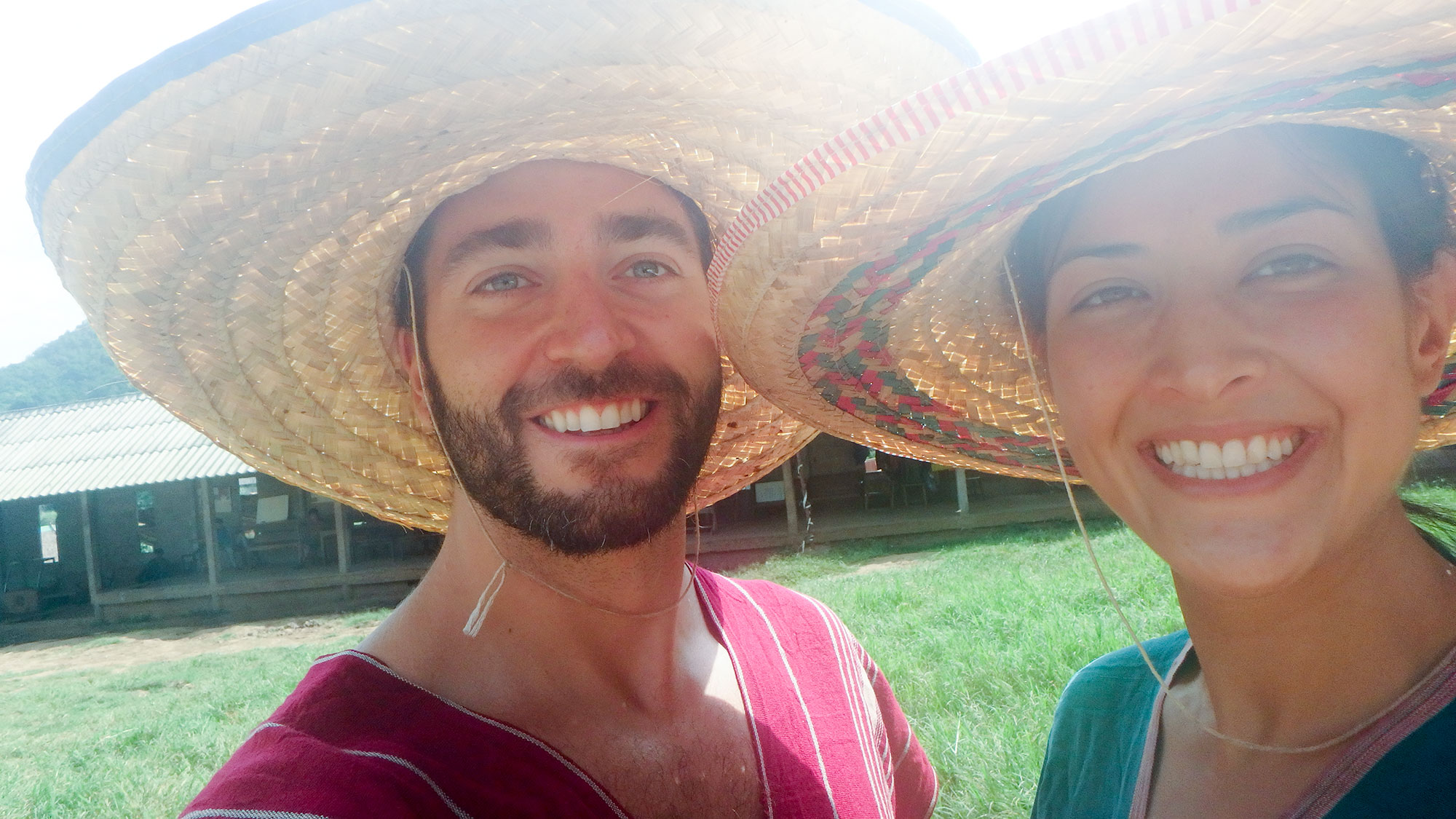 We were pretty pumped about our fisherman pants, woven tops, and straw hats. 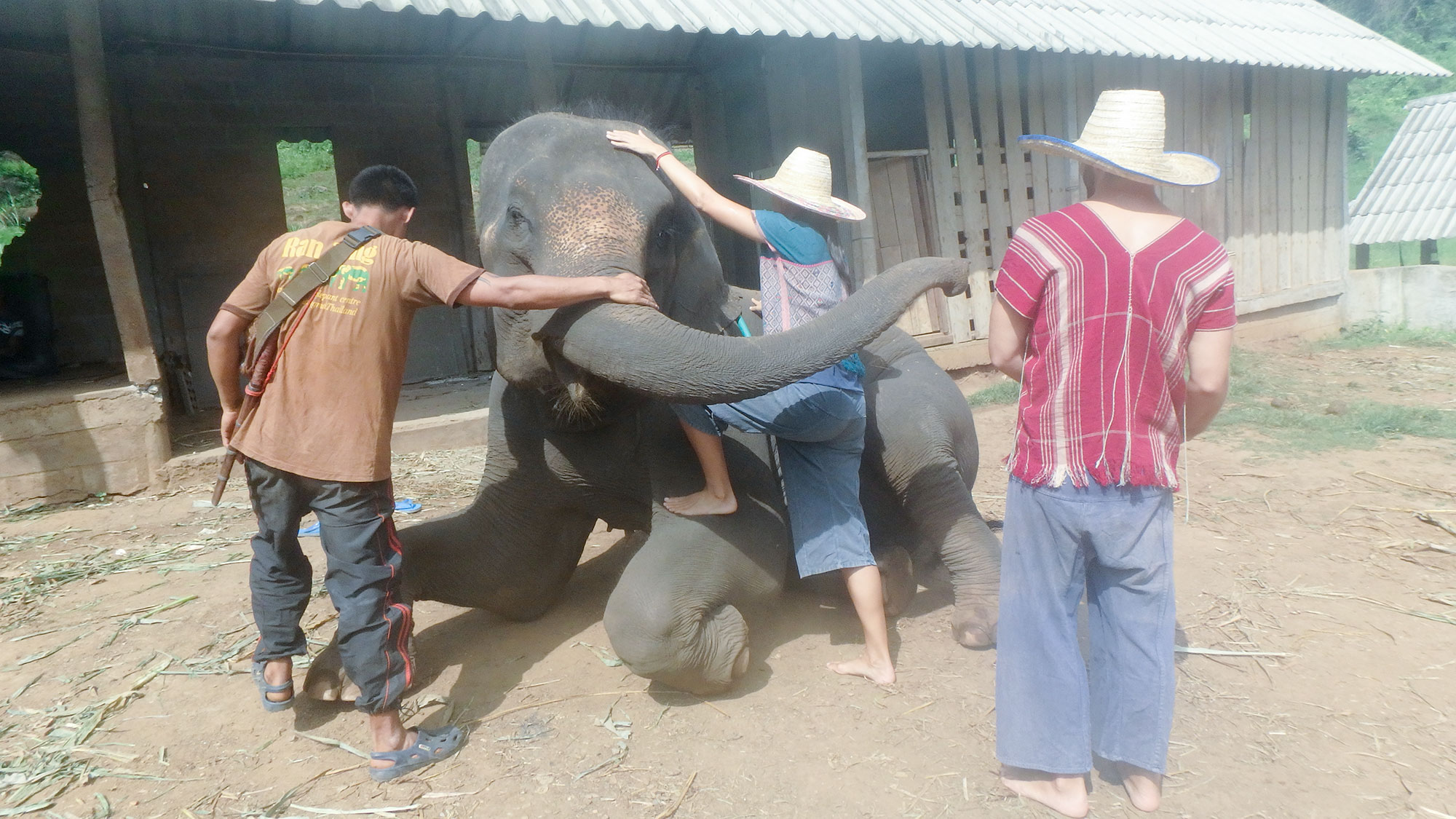 Chom knelt down for us to get on.

Holy crap it's high up here! 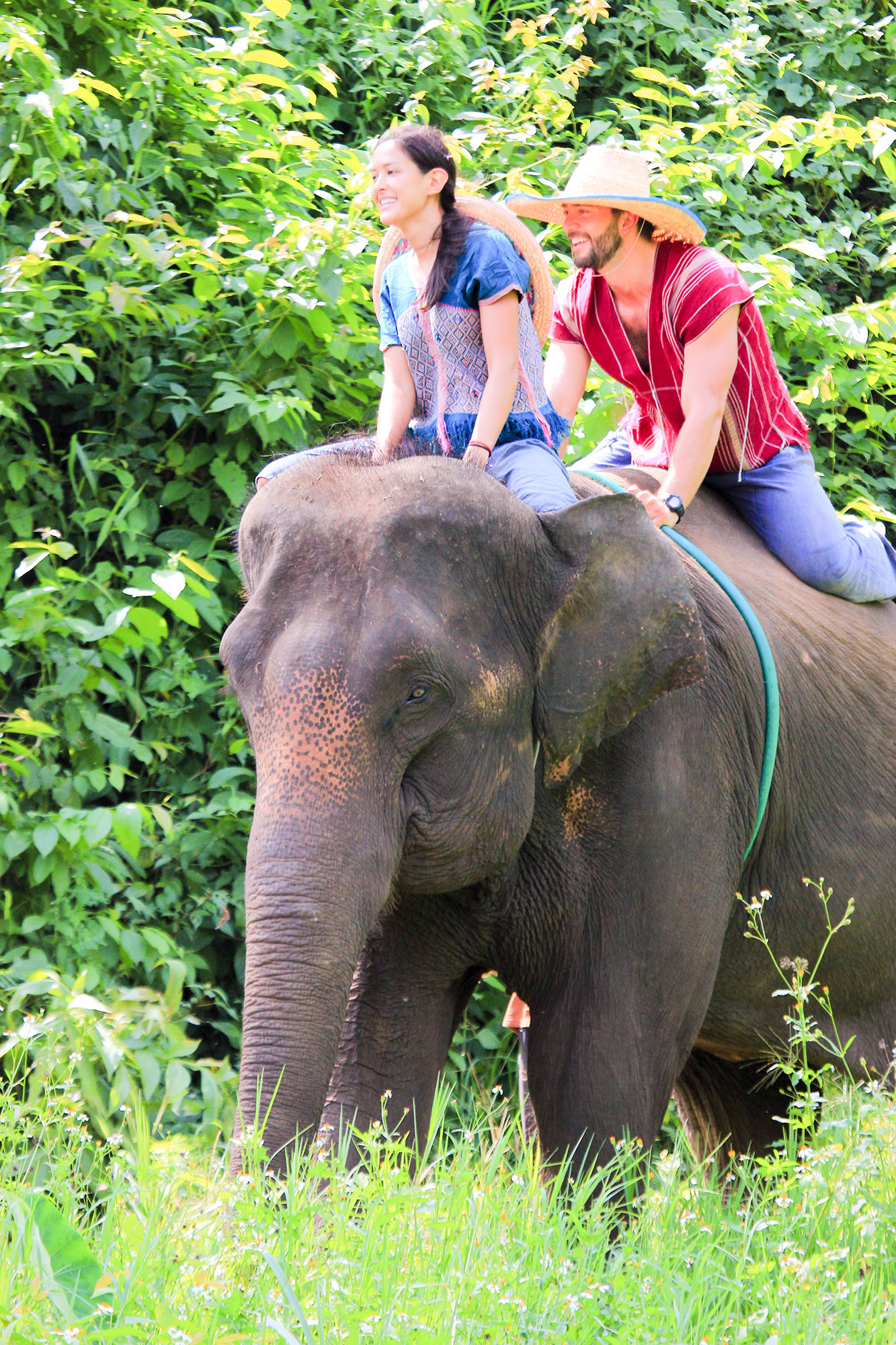 After our walk through the hills, we arrived at a mud puddle, which we quickly discovered is Chom's favorite part of the journey...watch out! Amazing how agile and strong their trunks are! 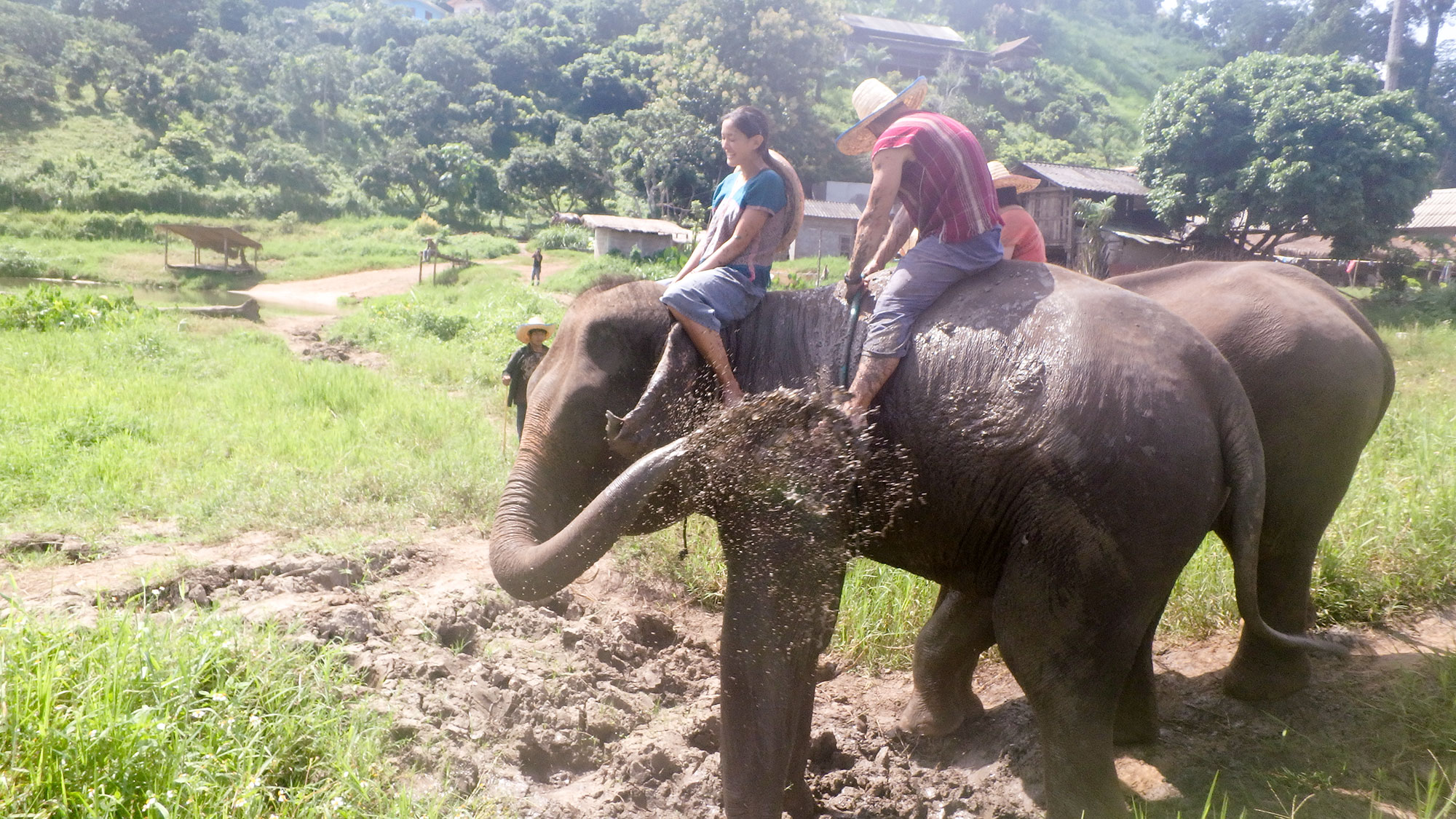 Now that we were all sufficiently dirty, it was time to give Chom a bath! 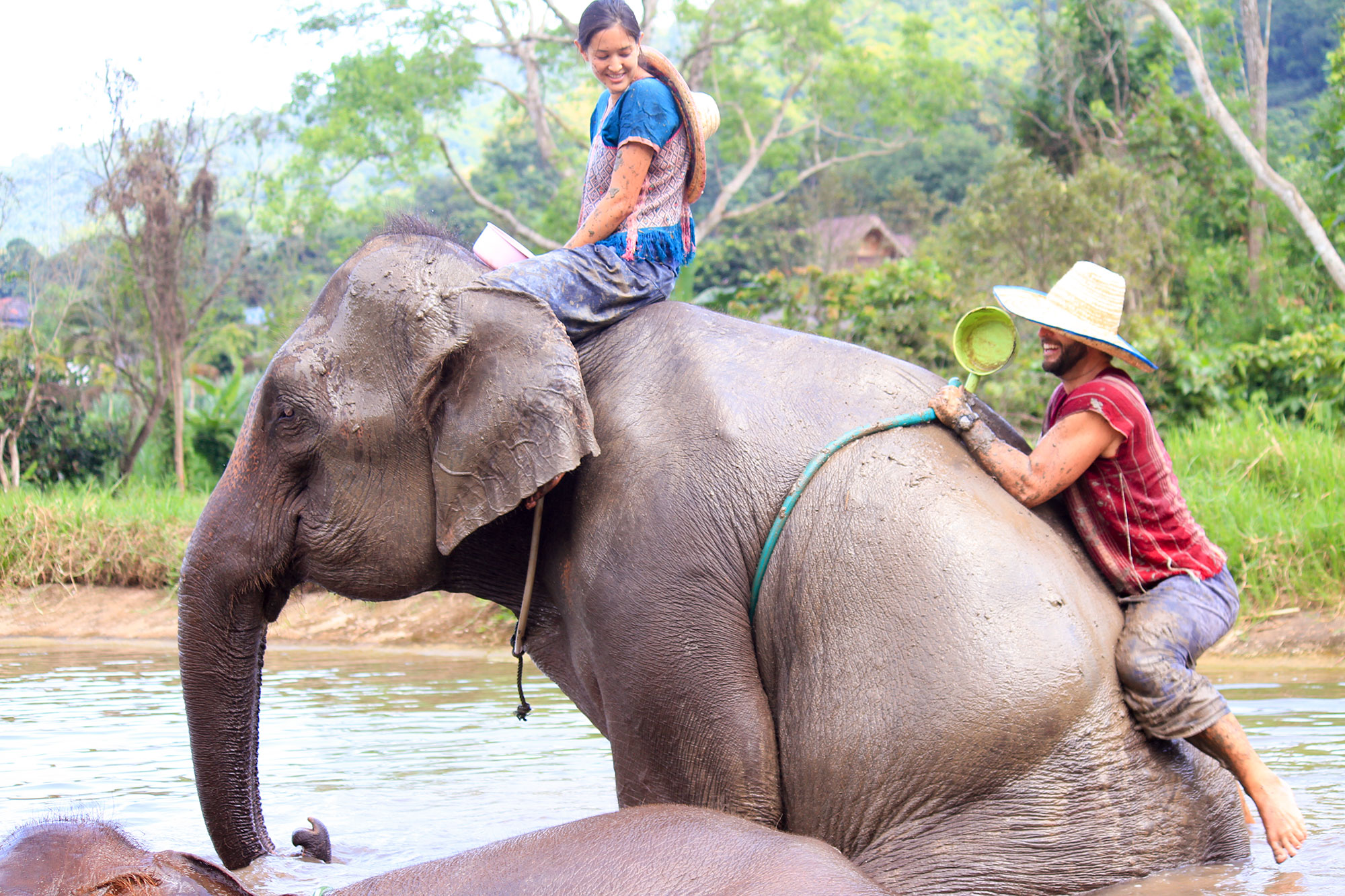 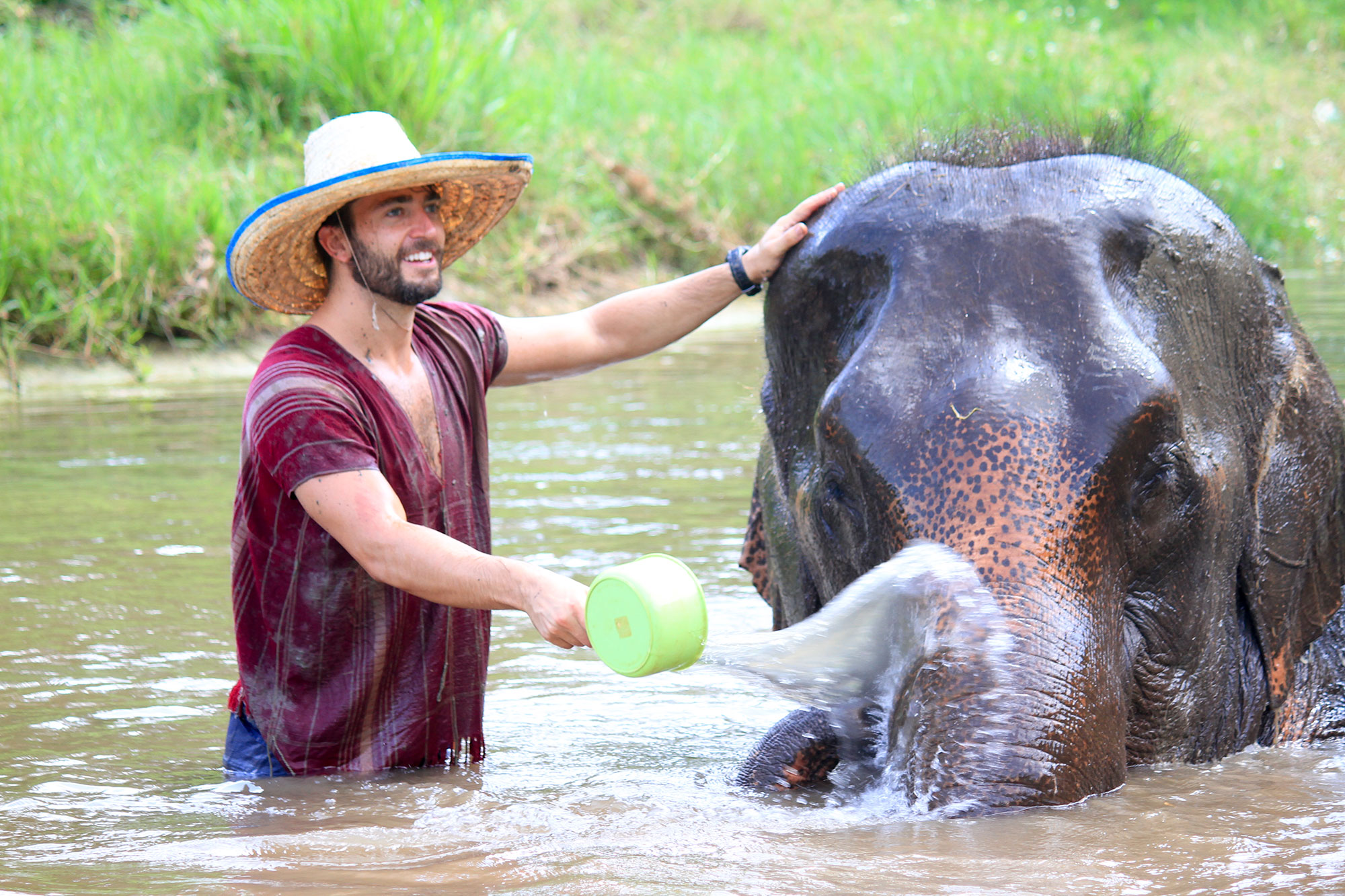 Very similar to the way we bathed at the meditation retreat.

I have to add that Dan is very happy I made him visit the elephants! Thanks Chom and Ran-Tong!

Dan Commentary:
As Meghan mentioned, I was pretty indifferent towards elephant riding. This was her thing. As far as I was concerned, elephant day was the same as any other day.

That is until that gentle giant lifted me with an extended foot up onto her back. Then I realized just how wrong I was. For the next two hours, you couldn't wipe the shit-eating grin (as my friend Nirmal would say) off my face. Riding an elephant is pretty amazing. They lumber along at a leisurely place and you feel like you've gone nowhere. Then you look back and realize that you've climbed a mountain.

Elephants are like cars in Northern Thailand. Seriously, they cost about $30,000, run for 60 years, and have titles which you can finance with a loan. Thais have used them for centuries to help construction, fight battles, haul loads, etc. Unfortunately, elephants are now being exploited for riding adventures like these and I think it can get a little inhumane at times. This made me feel a little guilty, but it seemed the place we visited treated the elephants well. As corny as this sounds, I now appreciate that elephants have something human about them -- a consciousness perhaps. This'll make even the most hardened macho man sensitive to the plight of the elephants.

Fun fact: The streets of Old City, Chiang Mai were built to allow two elephants to pass each other. This is why the streets are wide enough today to allow for two lanes of automobile traffic.

We also decided to squeeze in a quick downhill bike ride down the Doi Suthep Mountain a few kilometers from the city. The number of excursions was becoming a little excessive, but after being cooped up in meditation we were a little antsy for some physical exercise. Plus we missed our long bike rides at Lamai Fitness.

That leisurely bike ride we were hoping for quickly turned into intense downhill bike riding wherein you try your best to not fall over the edge of the trails (down cliffs) and attempt to properly ride down paths weaving through and over rocks. Sometimes we managed to "mountain bike" and other times we just fumbled along. No wonder they give you so much padding. 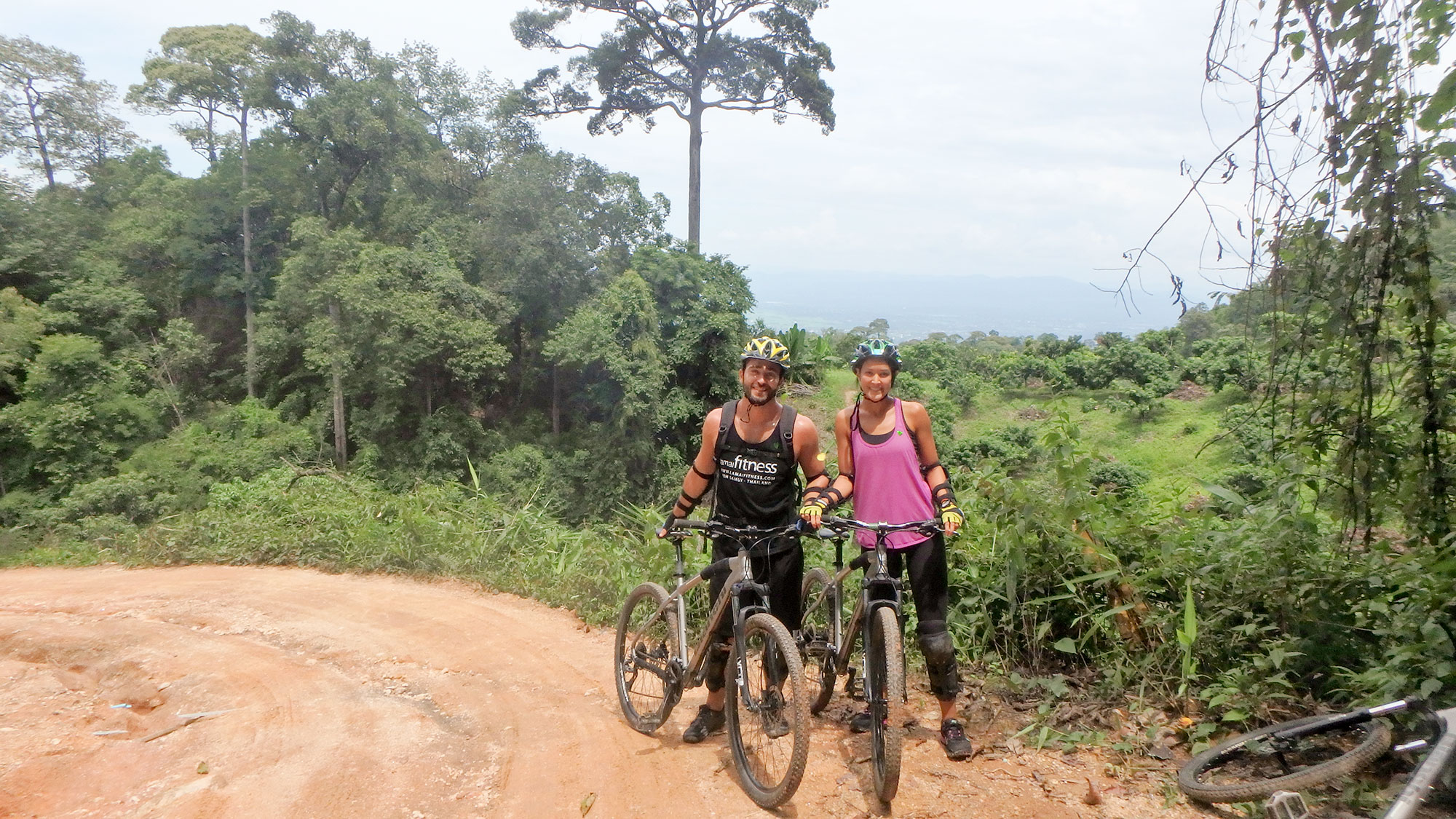 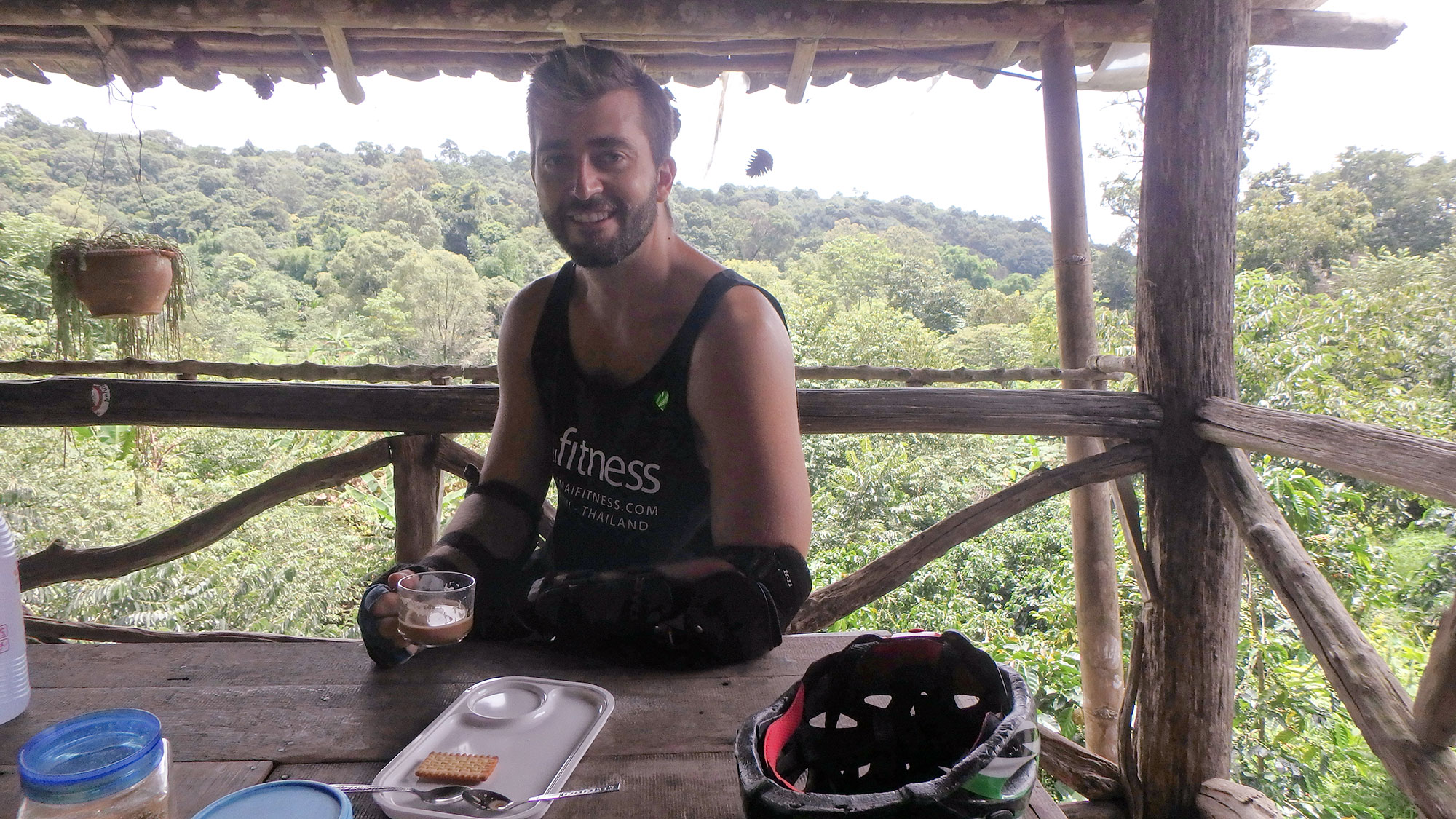 We stopped at a coffee plantation along the way 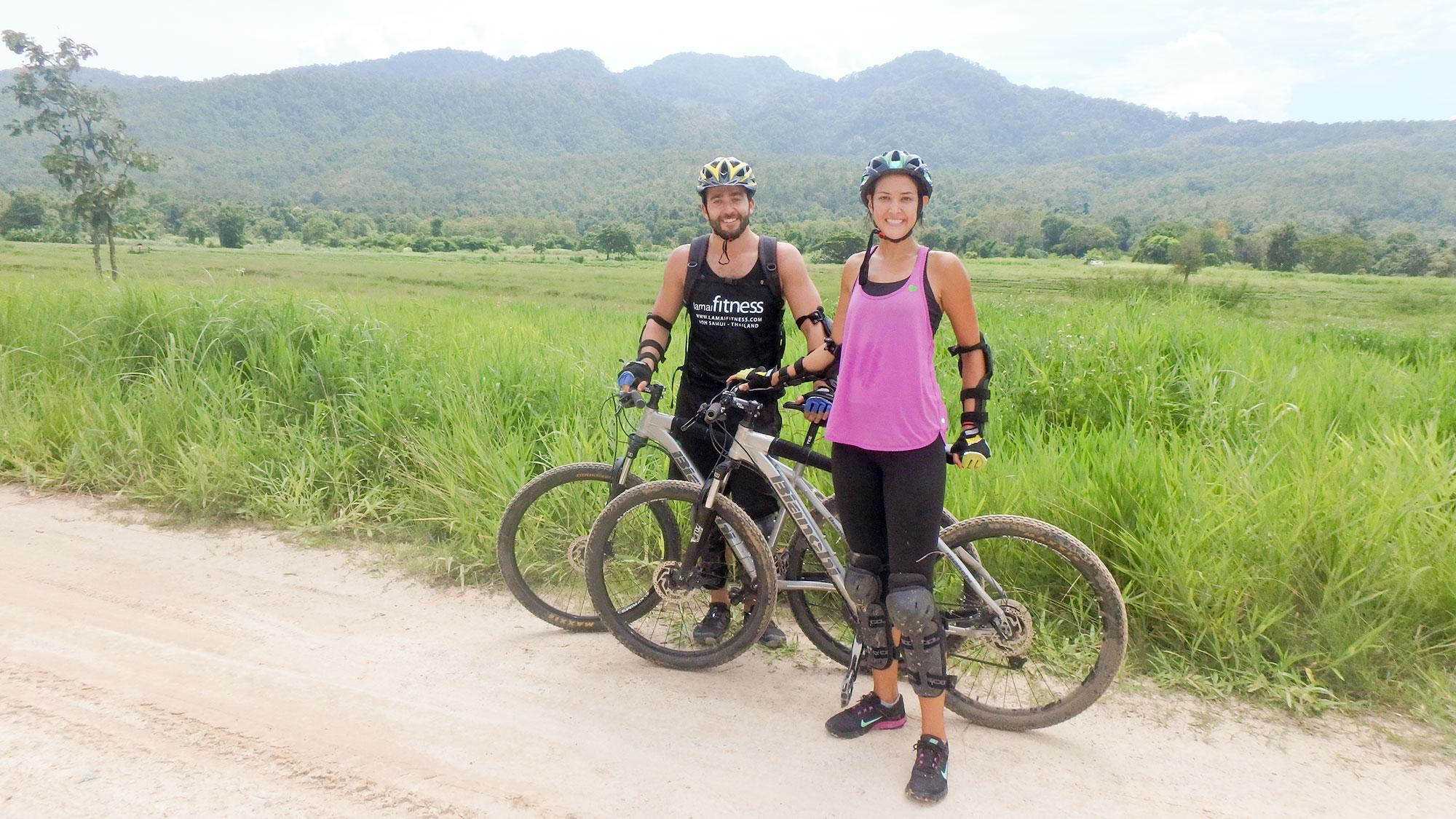 We made it to the bottom in one piece! We enjoyed lunch by the lake and the view of Doi Suthep from the ground.

Dan Commentary:
Mountain biking for me is more like trying not to die.

While we were in Chiang Mai, we also reviewed our first hotel as official hotel reviewers. One of Dan's former colleagues put us in touch with his daughter who is the managing editor of a travel media company. In addition to getting paid for reviews, the owners sometimes give us upgrades. Nice! 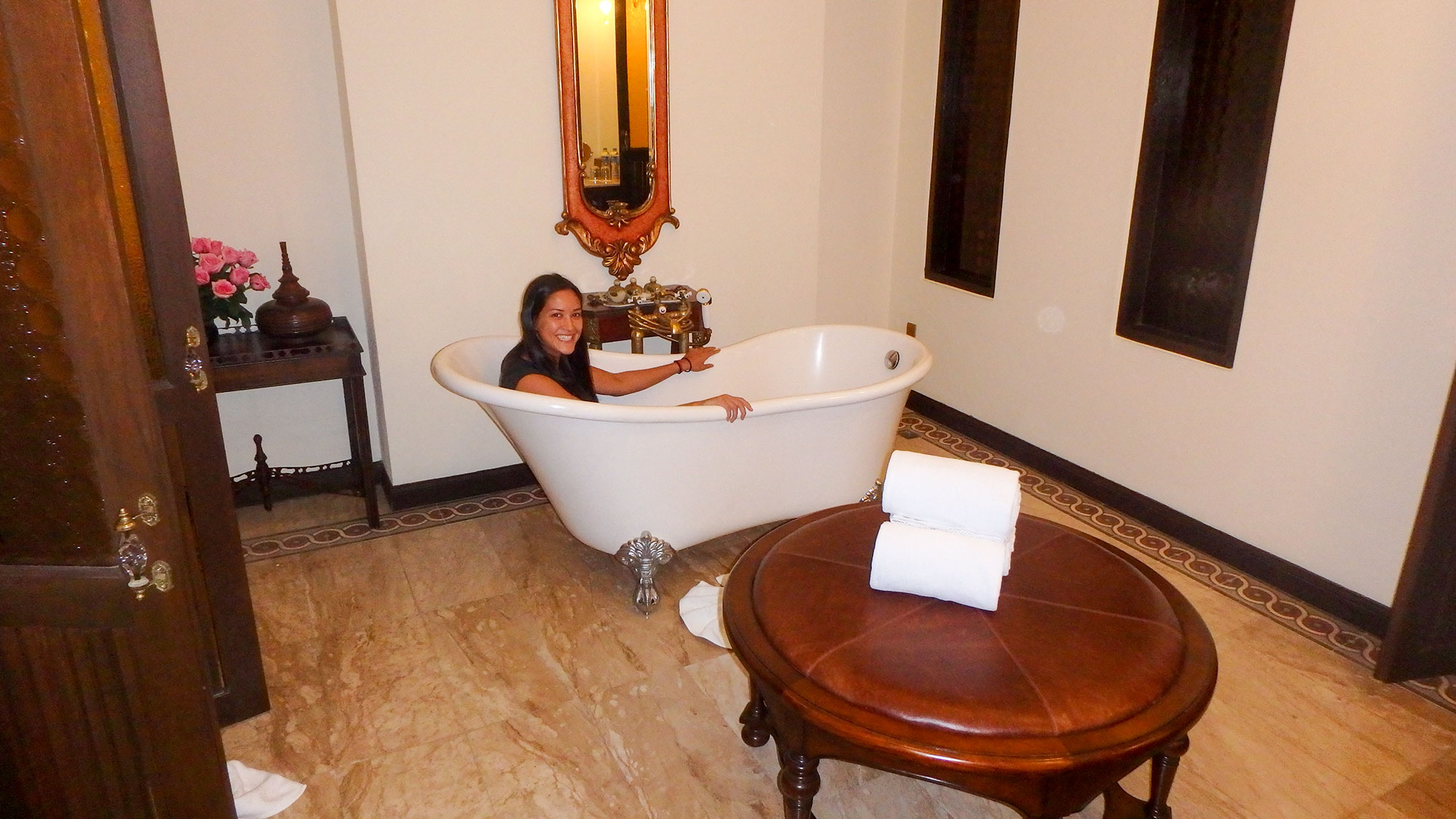 The bathroom in this suite was larger than our rooms at the meditation retreat!

Finally, it was time to leave Thailand and we were very, very sad about it. 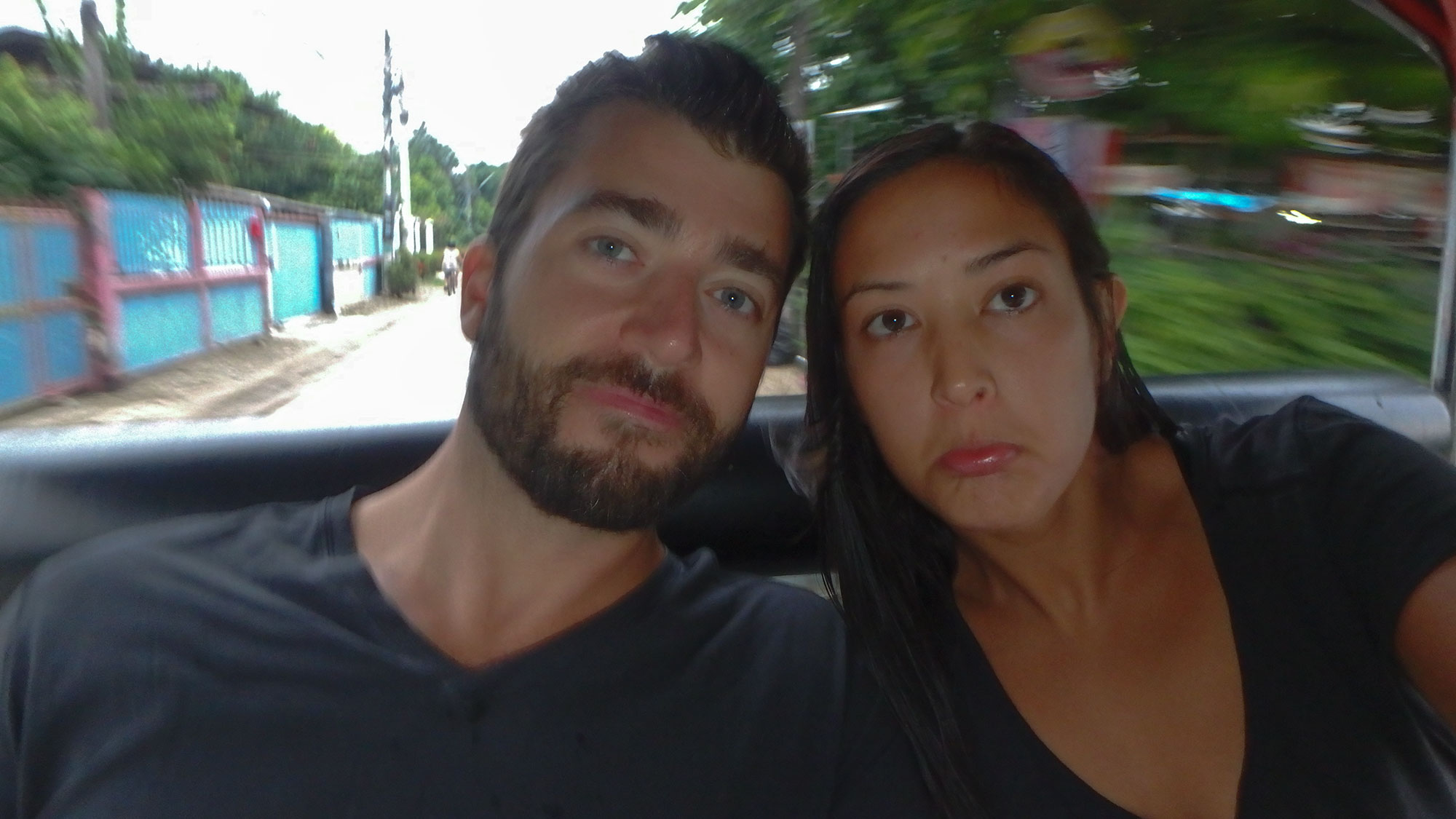 Goodbye for now, Thailand. We will be back!!

Meghan and I just spent the month of November sailing in Malaysia. Although we had a great time, one…

Meghan and I just finished a ten day silent meditation retreat at a Buddhist monastery in Southern Thailand. I…