And so the adventure begins!! Now that it's really here, the anticipation of leaving behind work, family, and friends now turns into the excitement of what we will encounter once we get there!

Both Dan and I have wanted to travel to South East Asia given the number of cool places to see in a relatively short distance from one another, plus you can't beat the inexpensive cost of living. We decided to start in Thailand because it offers a great culture, friendly people, cheap living, great food, and many islands and big cities to explore. Choosing exactly where in Thailand to start was narrowed down by our desire to decompress in a bungalow on an island with white beaches, crystal clear blue water, and pad thai...how else would you want to start a year off? Koh Samui fit the bill, so we booked a one way flight along with a villa on the northern part of the island in an area near Mae Nam (officially Baan Tai).

After spending some quality time with our families, we said sad goodbyes in Pittsburgh and New Jersey, packed our bags, and ventured off! 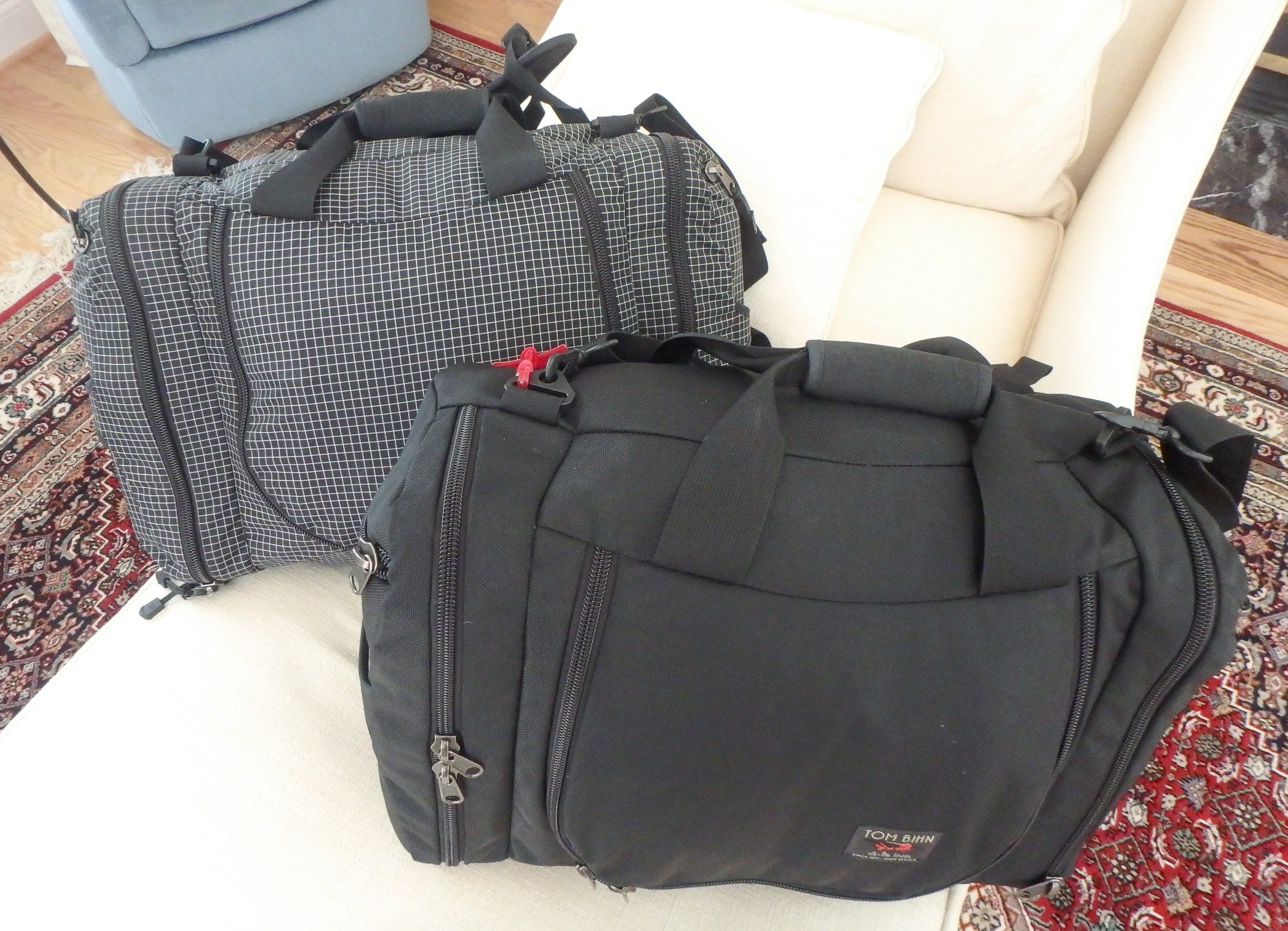 We made a quick pit stop in New York to say bye to friends before our 24-hour-long journey to Koh Samui. A few goodbye dinners later, we headed to JFK bright and early on July 19th to officially begin our trip!! 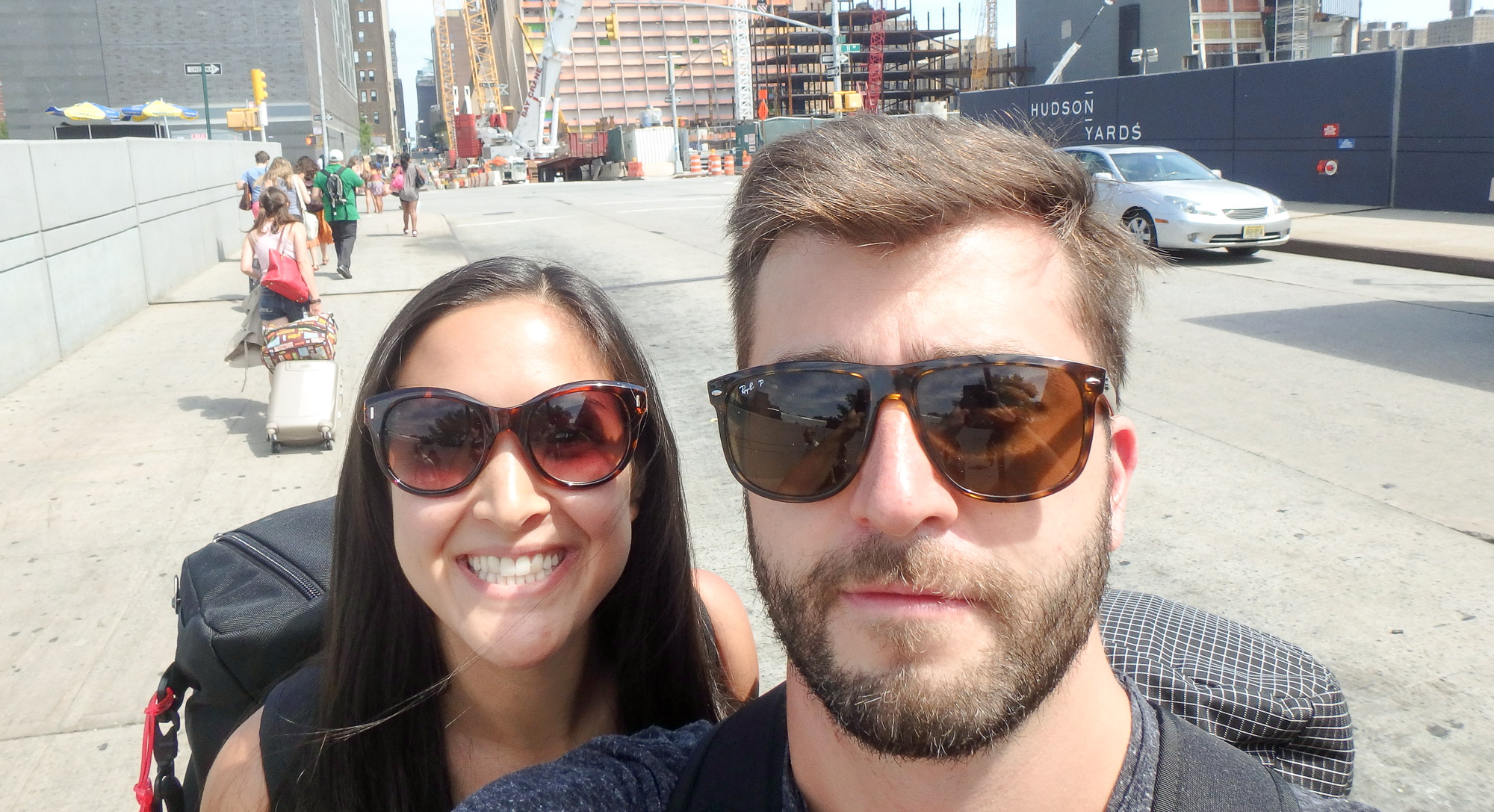 Since we were now keeping a tight budget, we opted for the cheaper flight option which consisted of two tight layovers in Hong Kong and Phuket, Thailand. As if the pressure of making those already tight connections wasn't enough, we also had to deal with a delay, immigration, thorough security searches of both our bags, and lots of running through airports. We made both connections by the skin of our teeth and the stress was well worth it when we finally made it to the small, outdoor airport of Koh Samui!

Despite being greeted by an island rain shower, we were warmly welcomed by our Airbnb host, Jakob. We stopped at the ATM to get our first Thai Baht in hand, and off we went to find our home for the next week, and more importantly start to decompress!

Our little villa, named Villa Pattama in the Samui Tropical Resort, was the perfect place to begin our adventure. 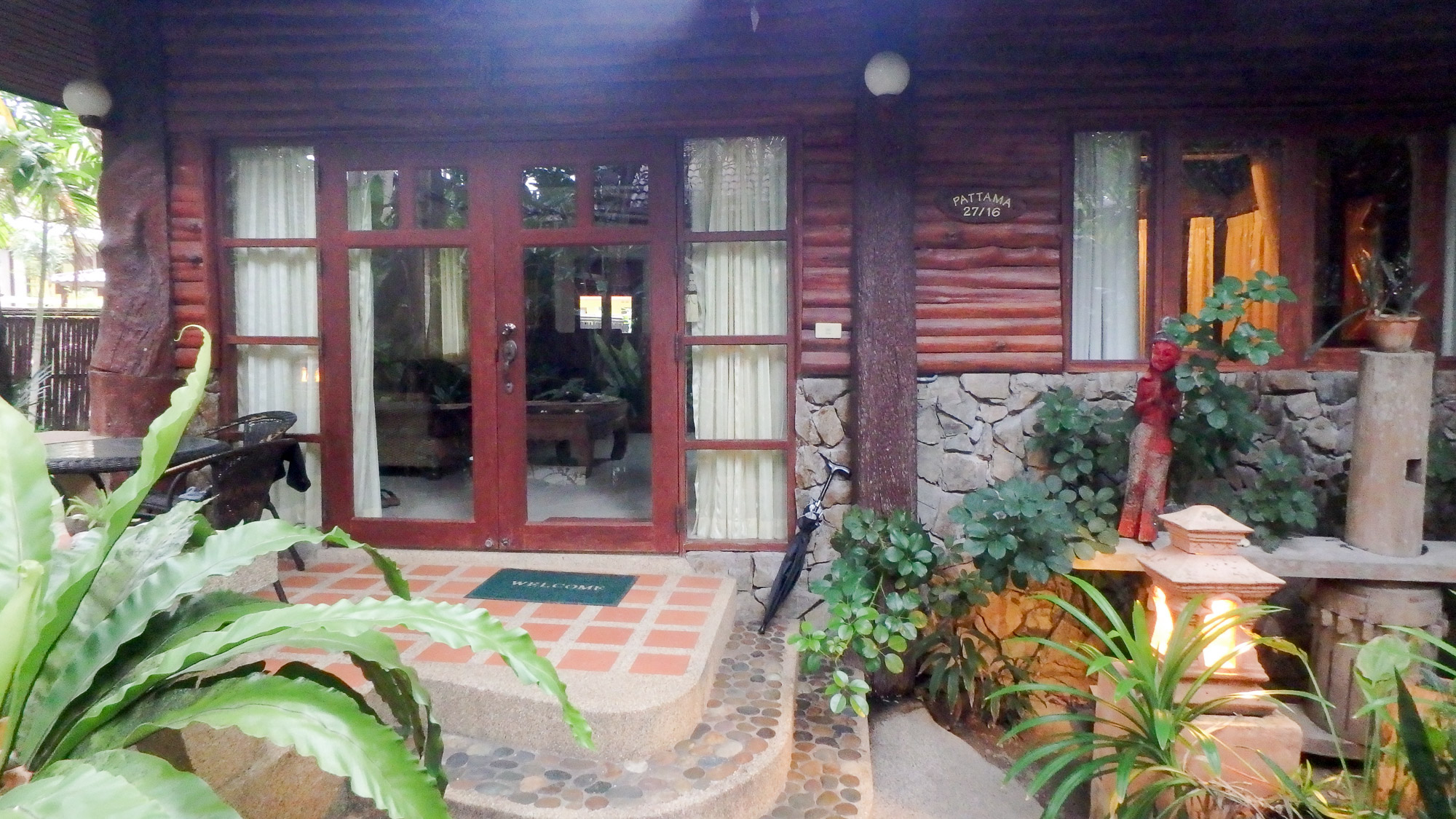 First, it was situated in a quiet part of the island, which was ideal as we wanted to stay clear of the herds of tourists. The resort was like walking through a tropical garden full of lush plants, buddhas, and a quiet pool, nestled among a few other villas. If the tropical garden atmosphere wasn't enough, the villa got us into island mode with its natural construction using materials from around the island - handcrafted hardwood cabinets, beautiful stone walls and floors, our own personal buddha in the center of the villa, and beautiful tropical flowers throughout. 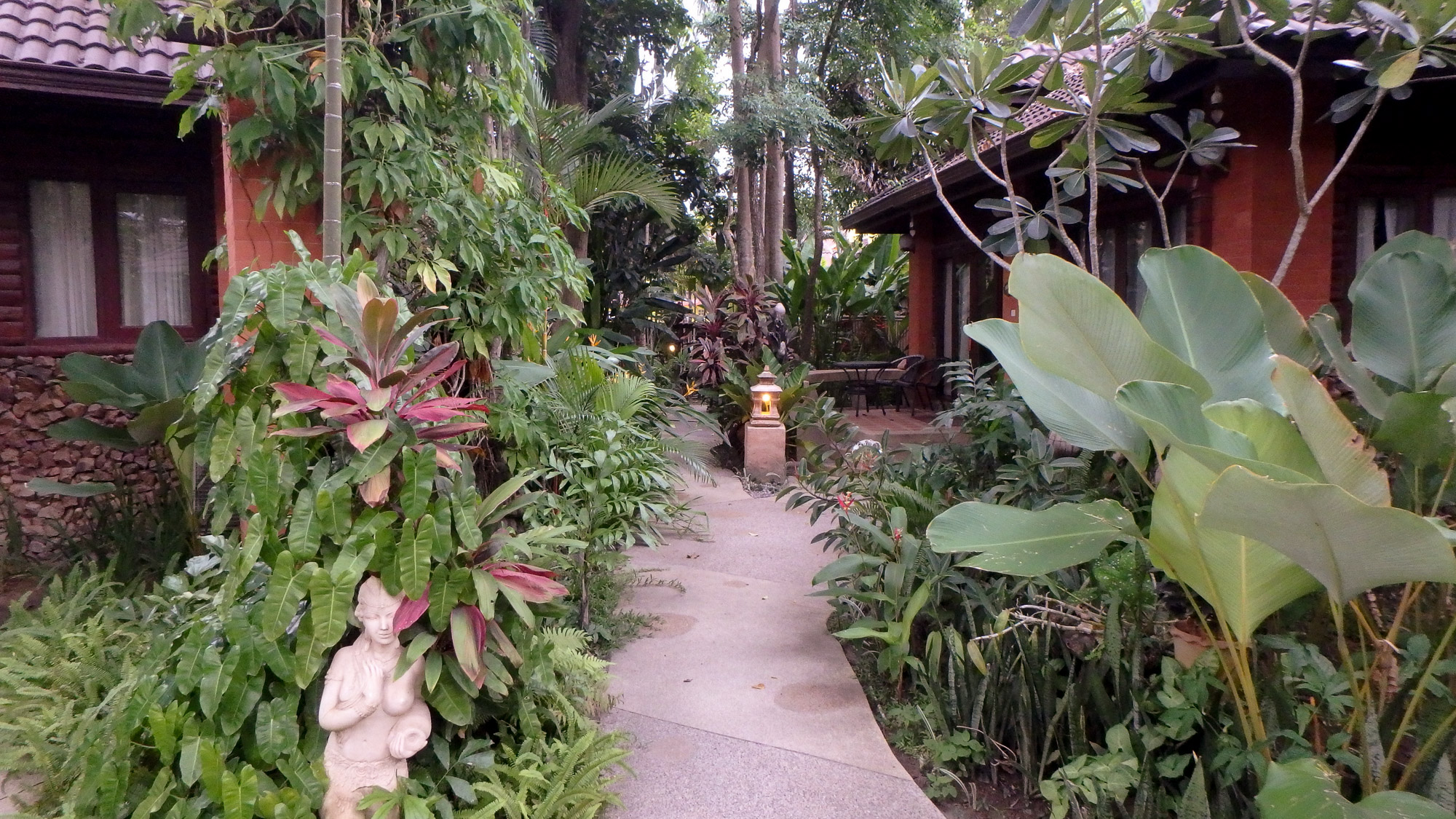 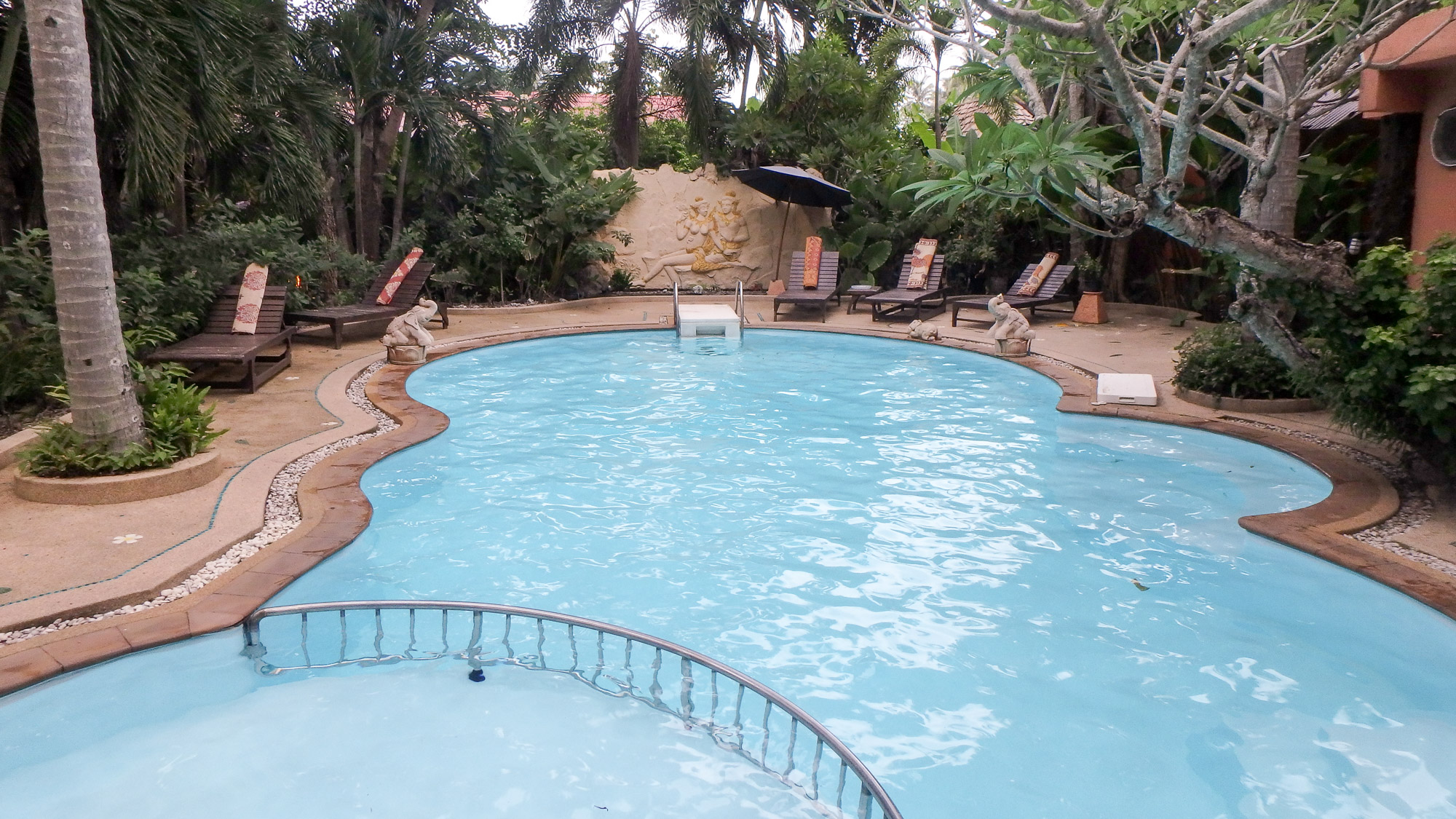 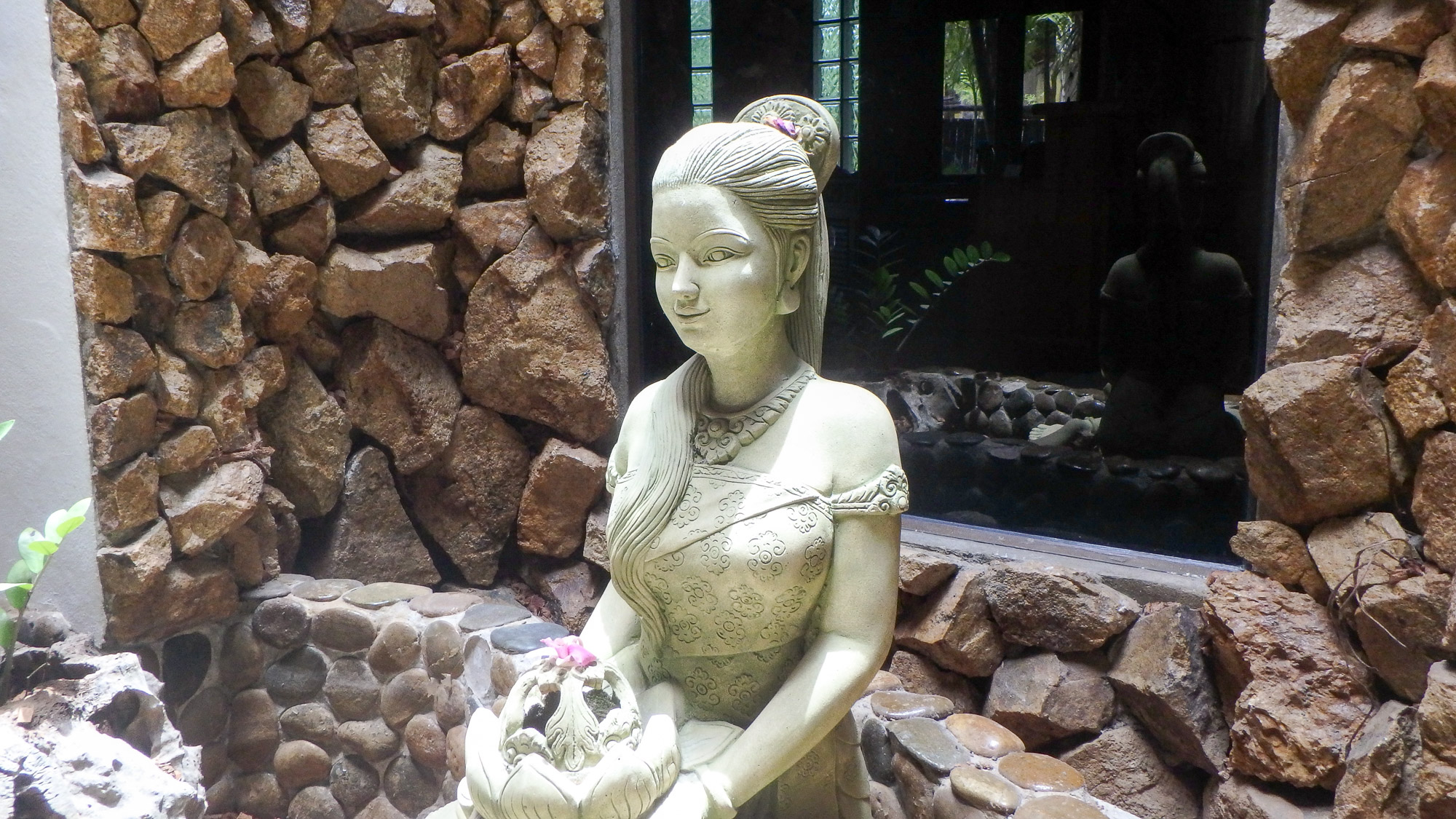 It was a huge villa and great value for the price with a spacious master bedroom, living room, kitchen, and two bathrooms. The buddha and vibe of the space instantly got us into a centered state ready for some relaxation and mediation. We also had a balcony in the front and a gazebo out back to enjoy the warm weather.

We were pretty eager to see the beach so the next morning we went for a walk to where Jakob had pointed it out the evening before. Walking along what they called the "ring road", which is the main road that loops around the island, proved to be a very interesting experience. It was a little scary to not have a sidewalk and walk on a main road where the cars and motor bikes drove on the opposite side of the road and followed their own traffic rules. We slowly made our way and finally arrived at a beautiful, quiet beach and quickly forgot about the walk there. The beach was picturesque and with less than twenty people at busy times so we had plenty of space to spread out our straw mats and catch some rays while reading on our Kindles. 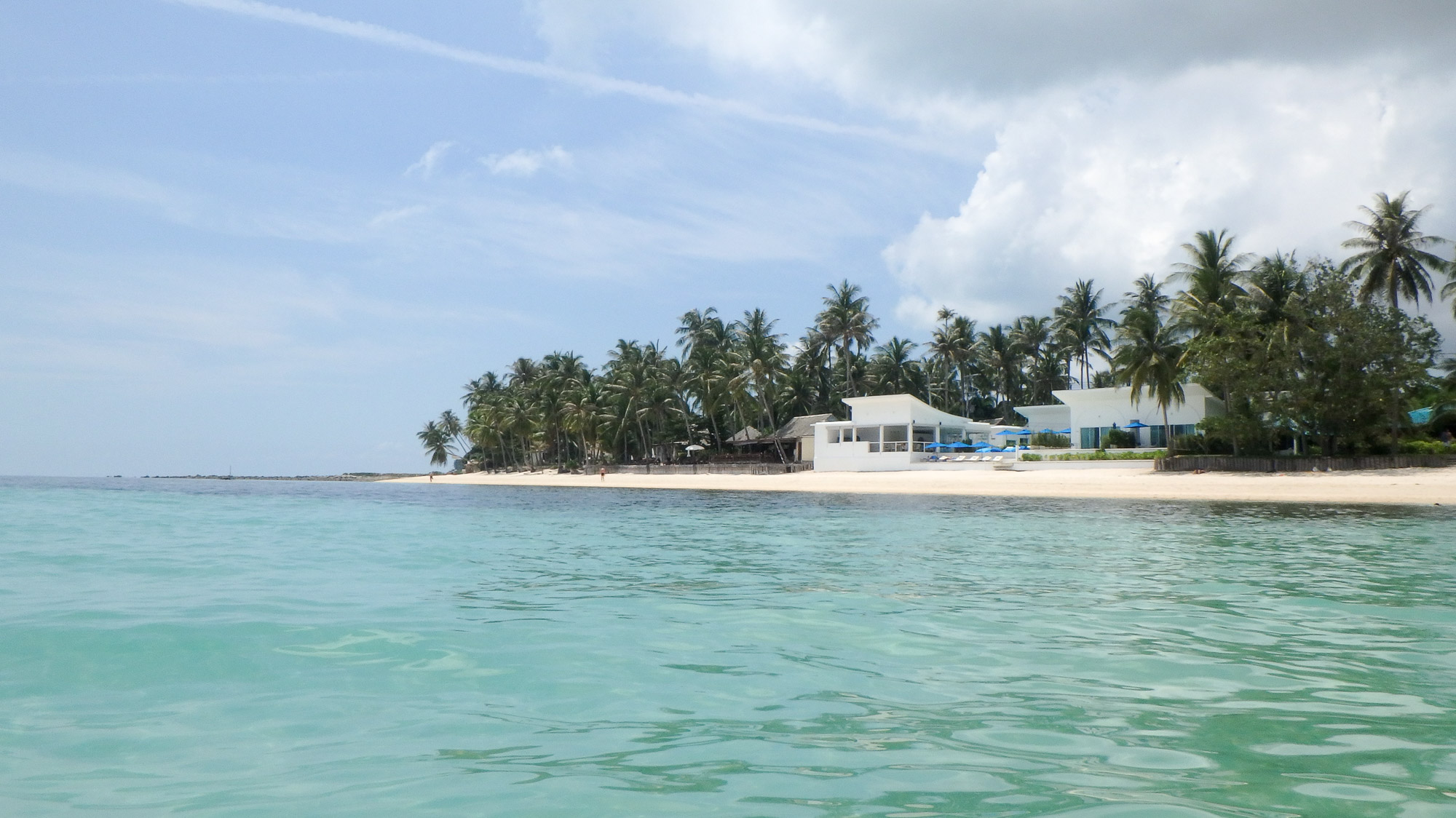 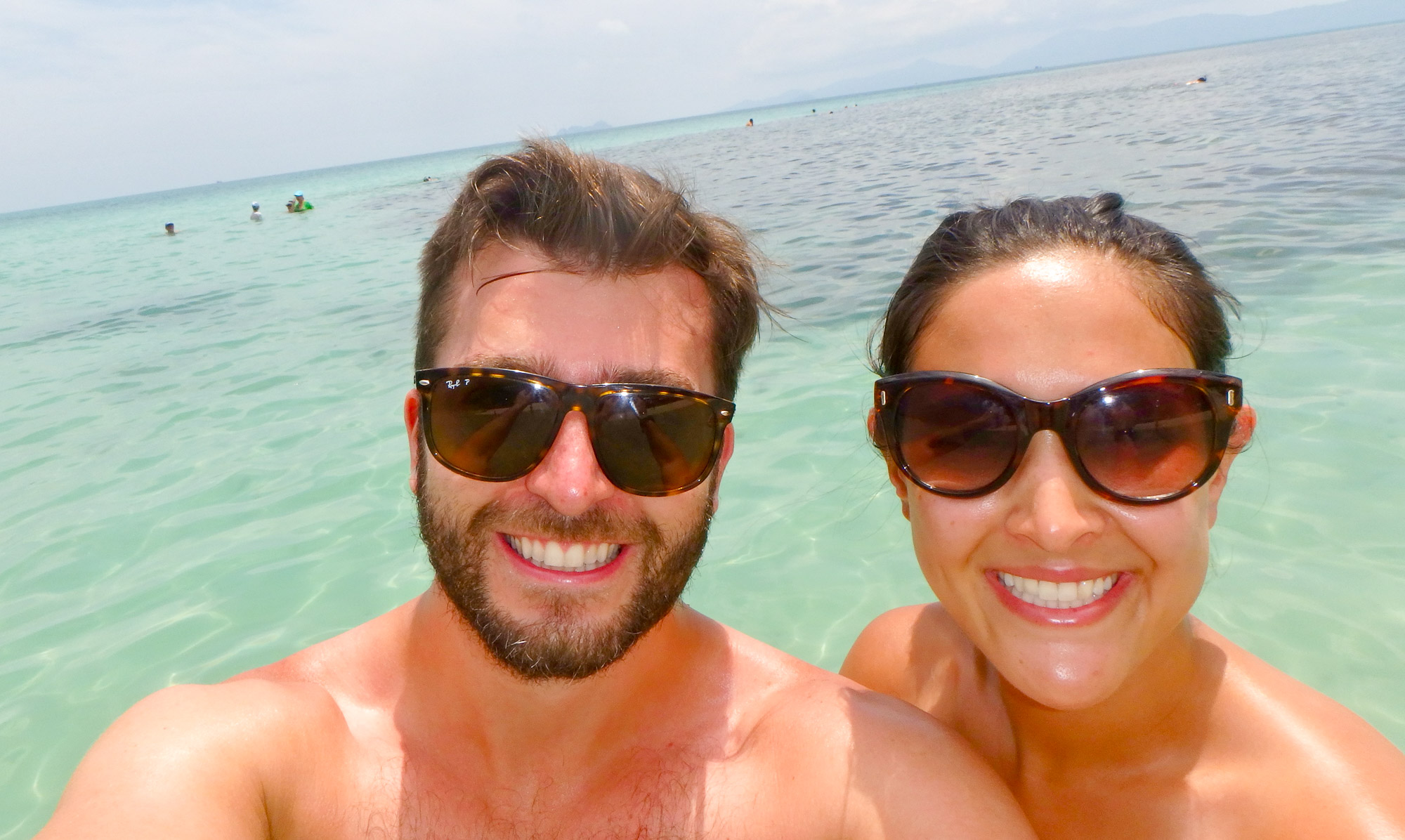 We quickly discovered a quaint little lunch spot right on the beach called Boom Bay where we decided to grab some Singhas and load up on pad thai on the daily basis. Yes, we did eventually branch out to try other Thai cuisine but I don't think we will ever get sick of good ol' pad thai. 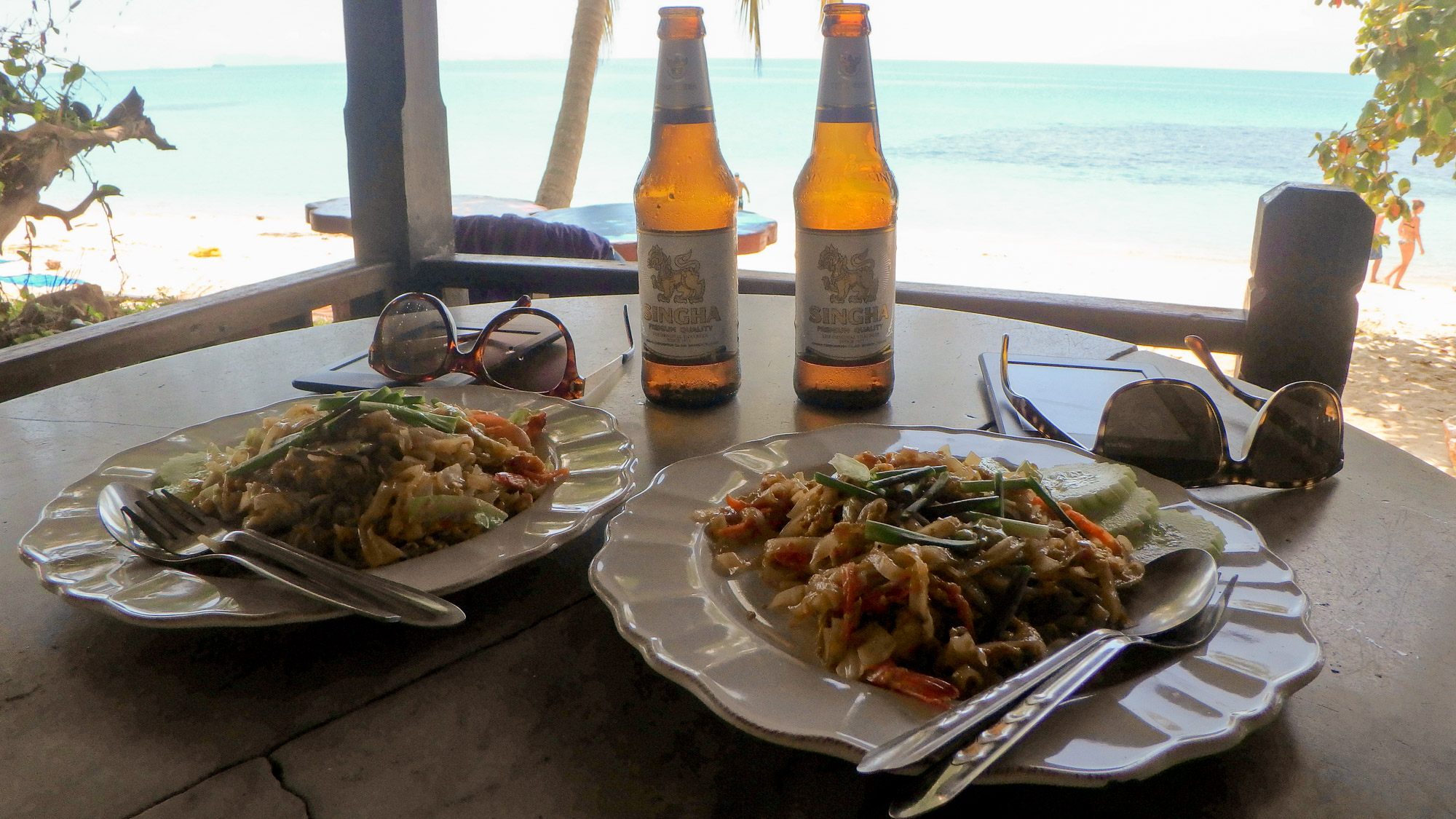 We also tried the local restaurant near the beach which we first referred to as "the bamboo place" due to it's complete bamboo decor (chairs, tables, roof, etc.), and later learned was called Mai Tai. This turned out to be our other favorite spot where we discovered a new favorite food: sticky rice with mango and coconut sauce! Plus we also loved the whole red snapper! We noted after trying out a few other restaurants in more touristy areas that we were pretty spoiled living in Baan Tai in terms of having a quiet beach area, low prices, and amazing food. Even in the center of Mae Nam which is an area that is supposed to be one of the less developed and quieter parts of Koh Samui, it is pretty touristy and you immediately see an increase in prices and number of people.

It became evident that in Koh Samui you really need to have a motor bike, or a scooter as I like to call it, to get around the island. We weren't the biggest fans of the walk to the beach on the ring road and also wanted to explore other areas of the island. Once we rented the scooter and Jakob gave us a map and pointed out some good places to see, we felt like the island had so much to offer and we had our freedom to explore it all! I will admit that I was a little nervous to ride on the back of the scooter as I had never been on one before, but it was quite a fun adventure! Dan luckily has his motorcycle license and had some experience driving these things so it went smoothly. I even tried out driving the scooter myself on the back road and it was actually really fun and easy (that is, when there's no one else on the road)! I managed to stay upright and even drive Dan around on the back for a few hundred meters! Don't worry, we wore helmets! 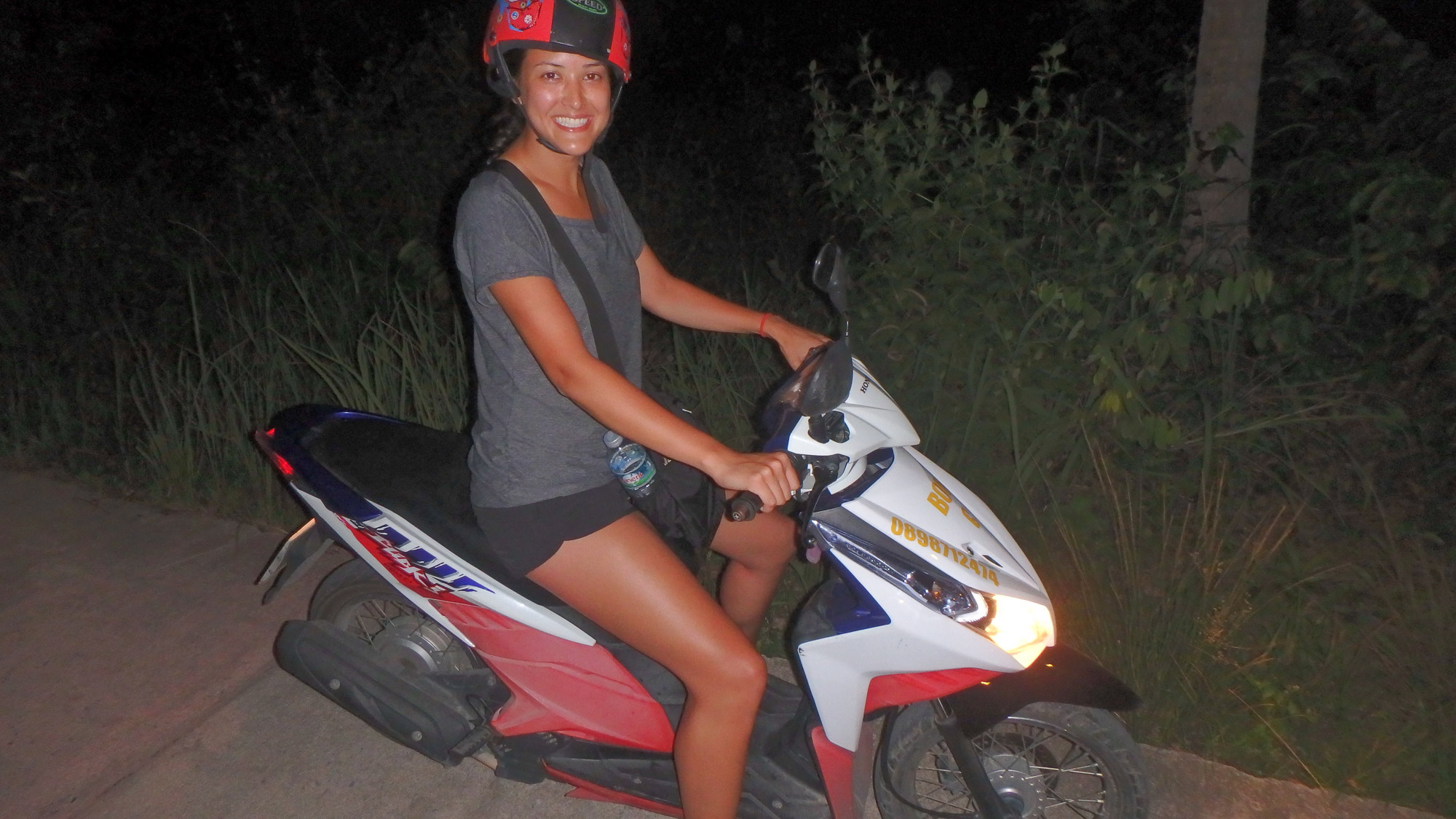 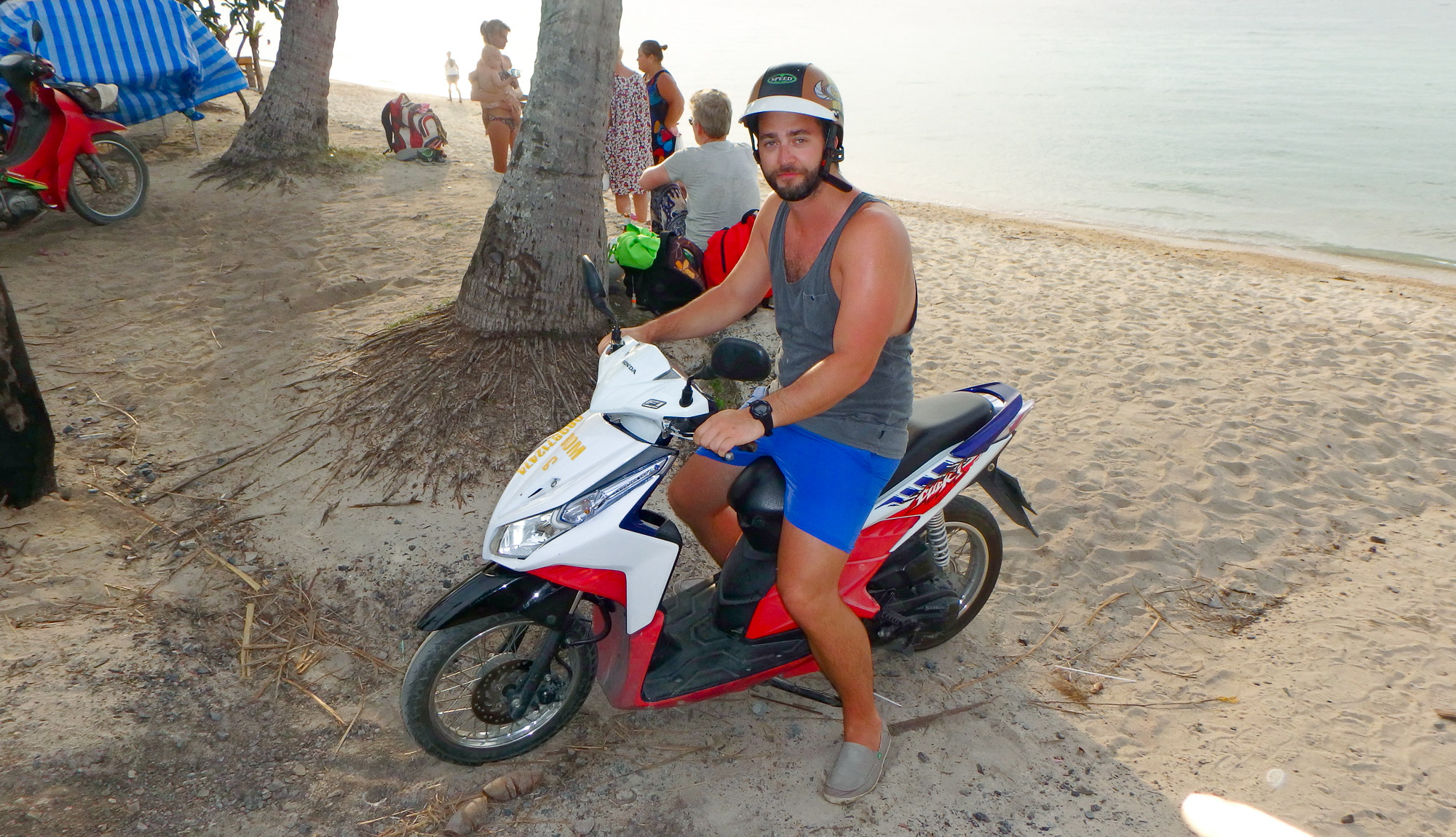 Feeling empowered by the scooter, we explored some other areas of the island like Lamai and nearby Mae Nam. I was eager to check out some markets to get a feel for the local culture and offerings. We visited the nearby morning market a few times and Dan tried street food at his first night market! Yum! 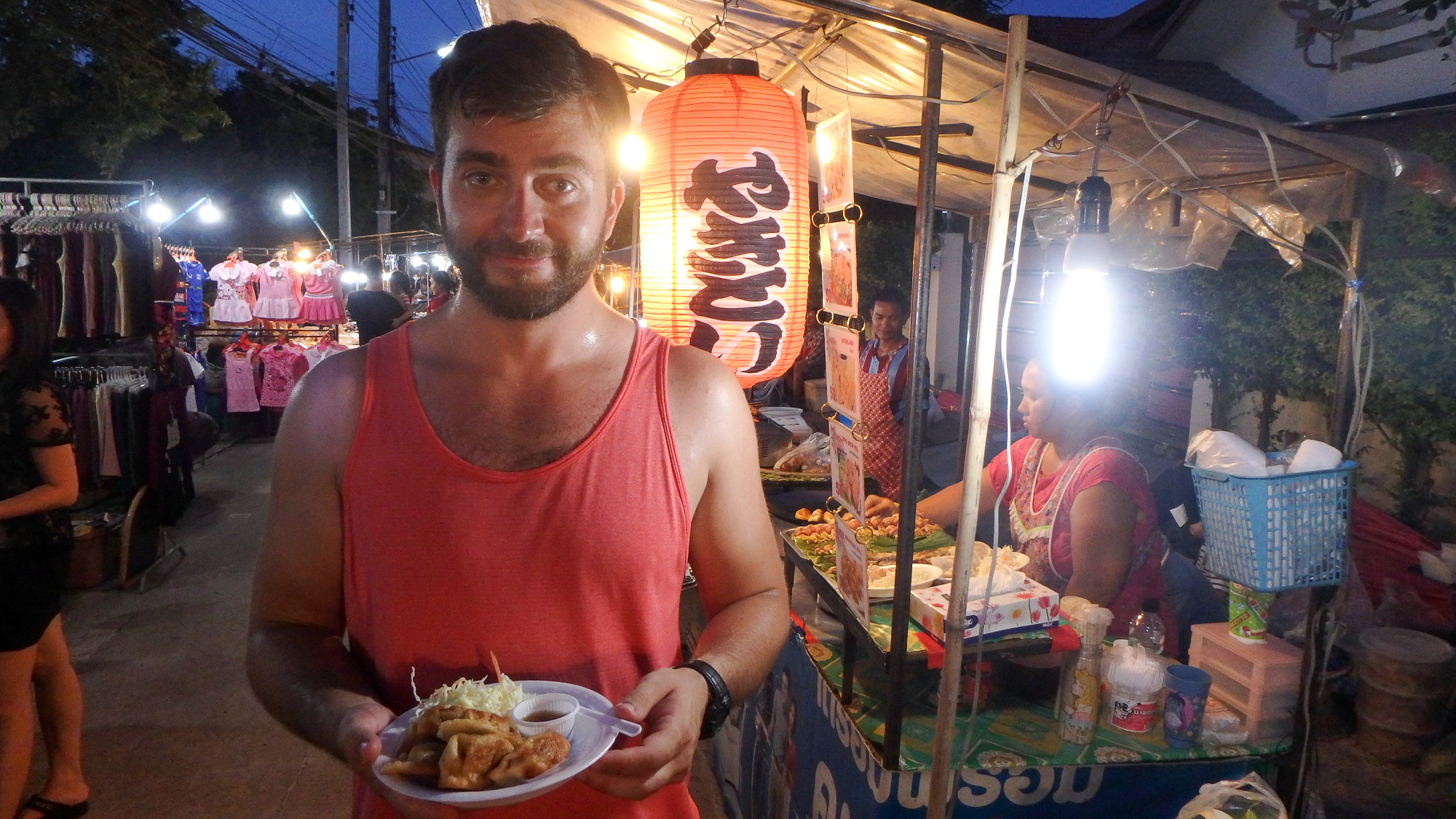 Overall, the first week in Baan Tai was just what we needed: an awesome villa, a great host, a quiet beach, a start to our tans, quality R&R time, a start to positive daily habits (writing, running, meditating, etc.), an intro to the local culture and cuisine, and most importantly, time to enjoy each other's company. We were quite sad to say goodbye to Villa Pattama after our week long stay, but it was just the first stage of our trip and the next leg was about to begin in a nearby island called Koh Tao: endeavoring into a scuba diving certification course!

Thanks for following the blog so far...stay tuned for another posting soon! :)

One Month in Lamai

Our First Two Weeks in Thailand: A Clichéd Start