We've been abroad for over two weeks now and we're finally settled enough to begin documenting our experiences on our travel blog, undeferred.io. Before getting too far into this first post, I want to make a disclaimer: if you were expecting tales of exciting adventure or of spiritual enlightenment, there has been none of that yet.

Instead, our first two weeks were as clichéd a trip to Thailand as you could ever expect.

This photo, for example, sums up our first week: 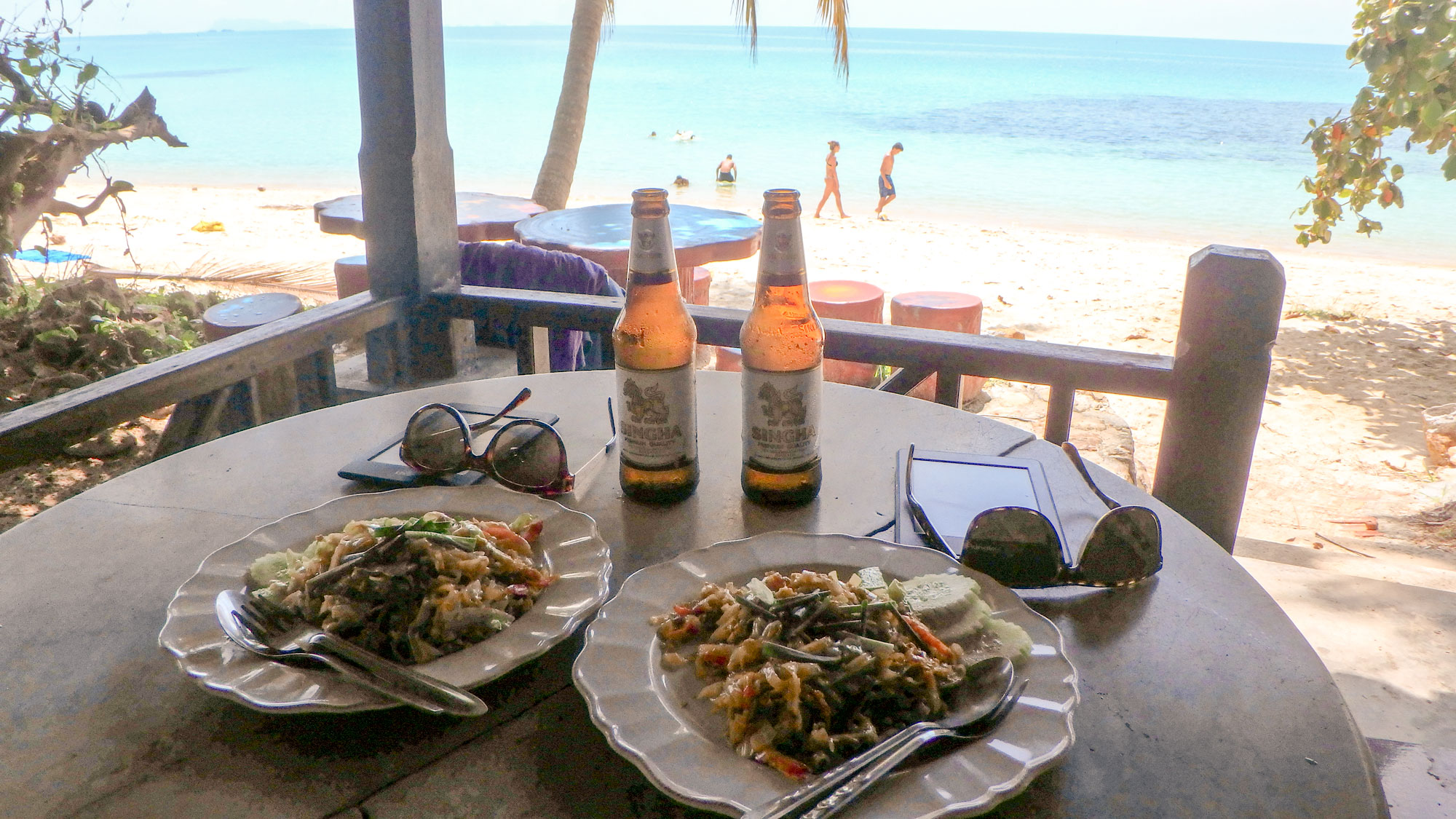 We left the States on the morning of Sunday, July 19th. The travel was rather effortless -- despite two very close connections in Hong Kong (50 minutes) and Phuket (20 minutes). We arrived in Koh Samui at around 8:40 PM on July 20th, good to go.

Koh Samui is the second most popular island in Thailand, after Phuket, located on the eastern side of the mainland in the Gulf of Thailand. 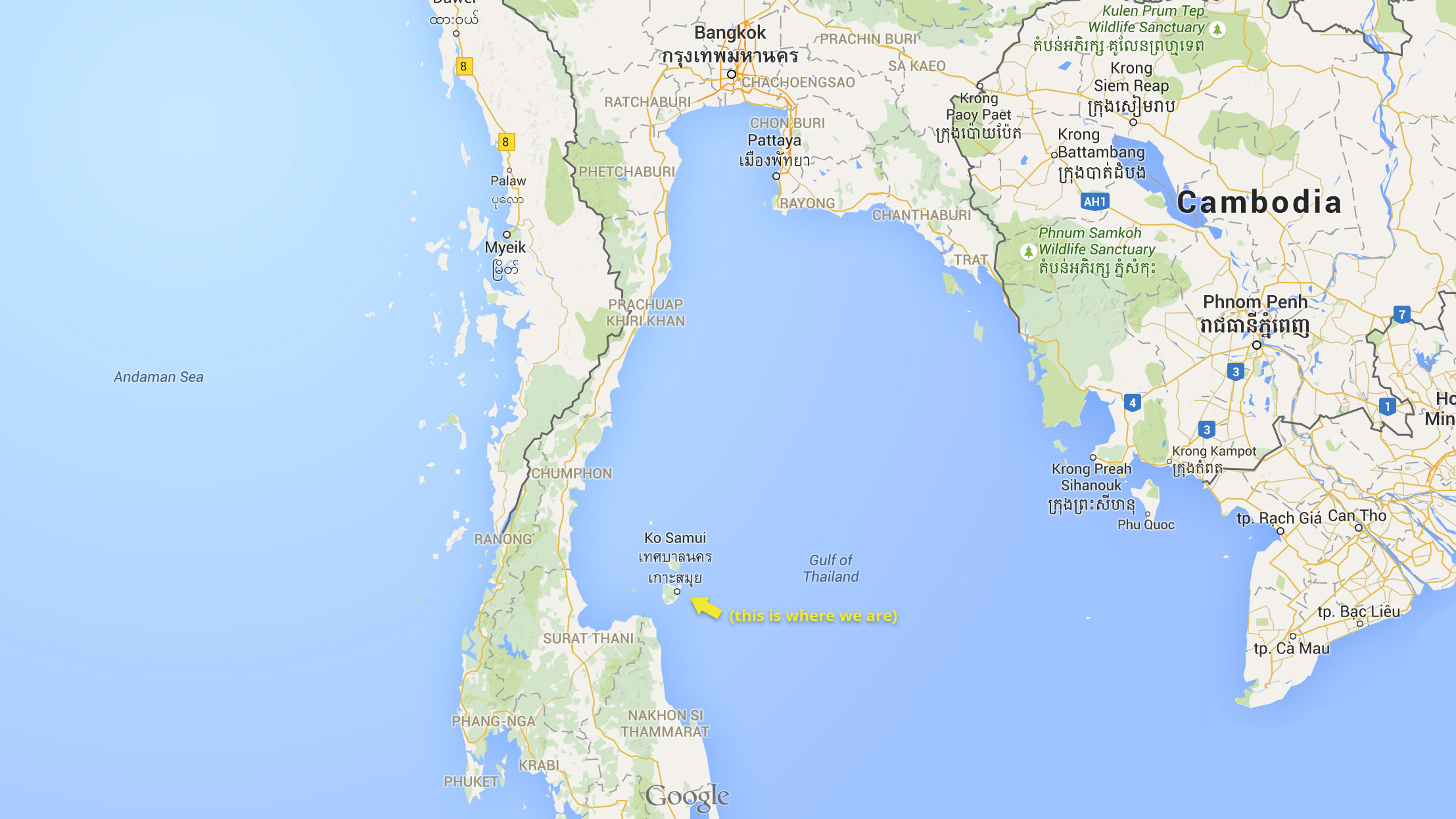 We chose Koh Samui as our first destination on somewhat of a lark, without much foreknowledge. The decision evolved as follows: rather than starting our adventure in the hustle and bustle of a big city like Bangkok, we thought it might be better to decompress on a beach. I've been really interested in going to a meditation retreat while in Thailand and one of the best looking retreats I was able to find through the internets is located on the mainland, relatively close to Koh Samui. We knew Koh Samui had beaches and an airport. Thus the decision was made.

Our first week was spent in a villa I found on Airbnb called Villa Pattama. It was slightly pricier than what we typically expect to pay in Thailand, but the place was highly reviewed and the host was described as being very helpful. We didn't want to take the risk of ending up at a dump for the first week of our adventure, so that's how we justified the premium. But even then, we were flying blind without any true sense for the quality of the neighborhood we had chosen.

What we lacked in knowledge, we made up for in sheer luck. The villa was better than advertised (which is rare on Airbnb) and the neighborhood of Mae Nam suited us well compared to the other areas of Koh Samui, which can be extremely touristy.[1] 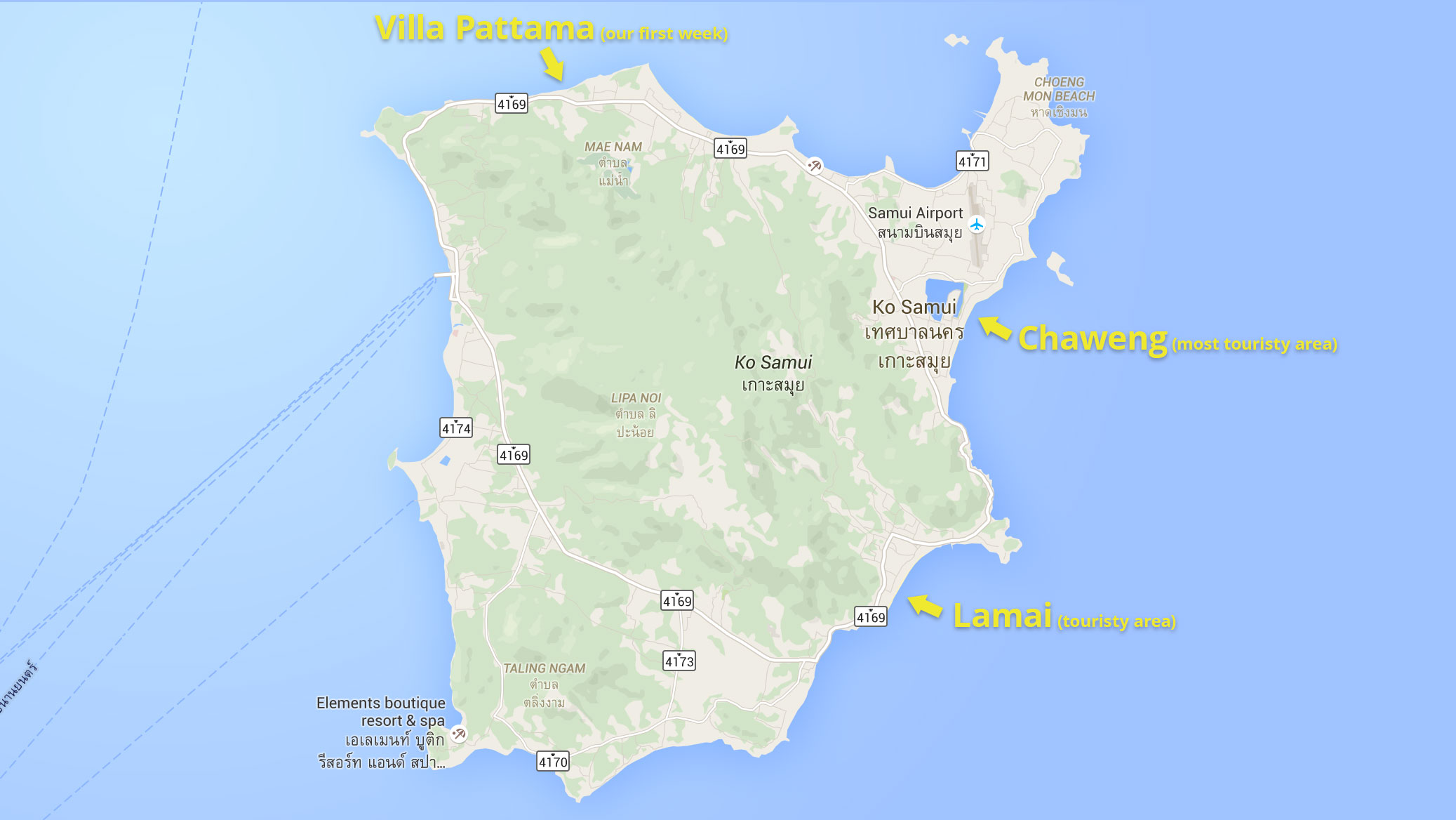 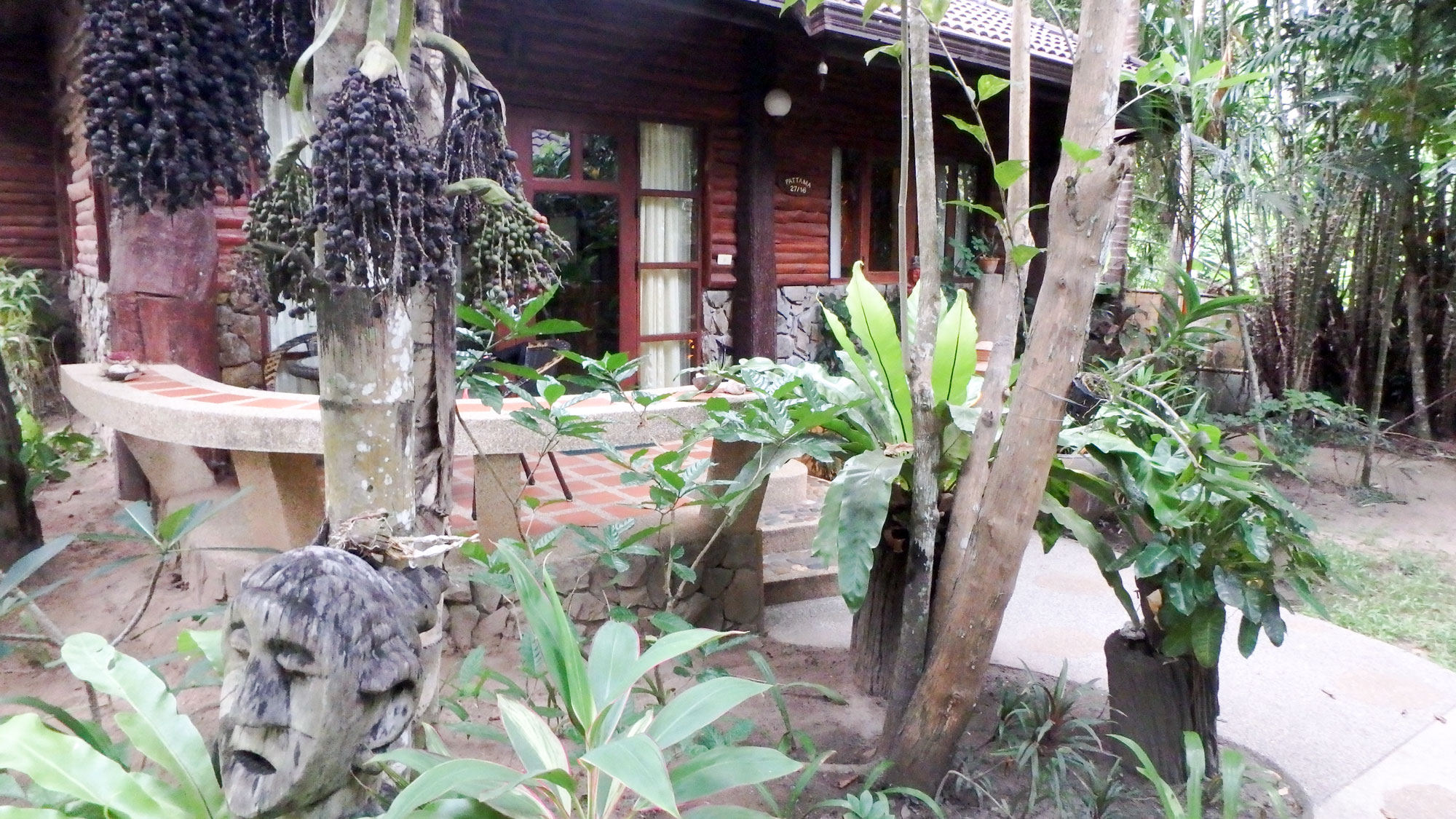 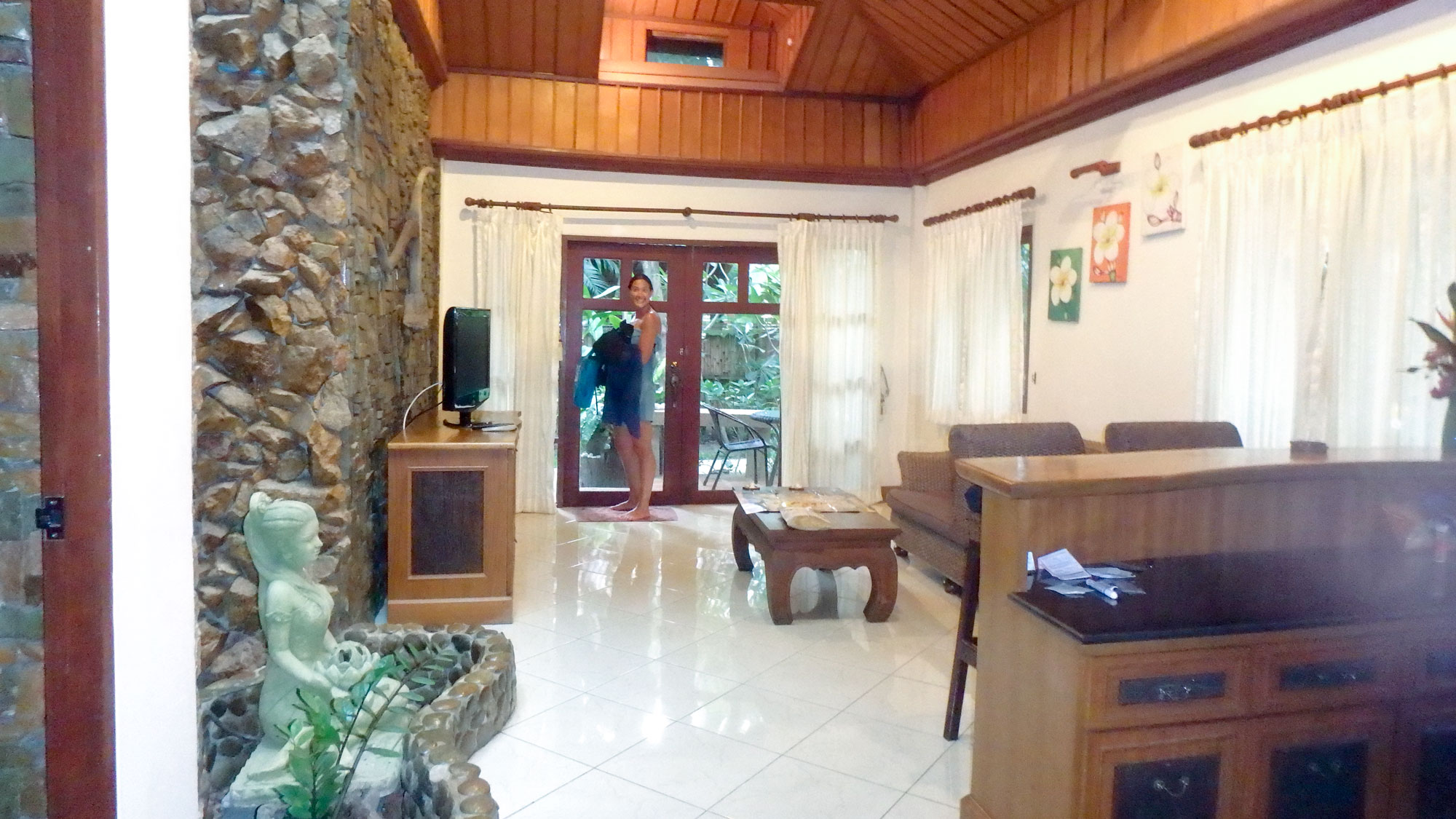 This is the best interior shot I have. Not the best photography, I know. 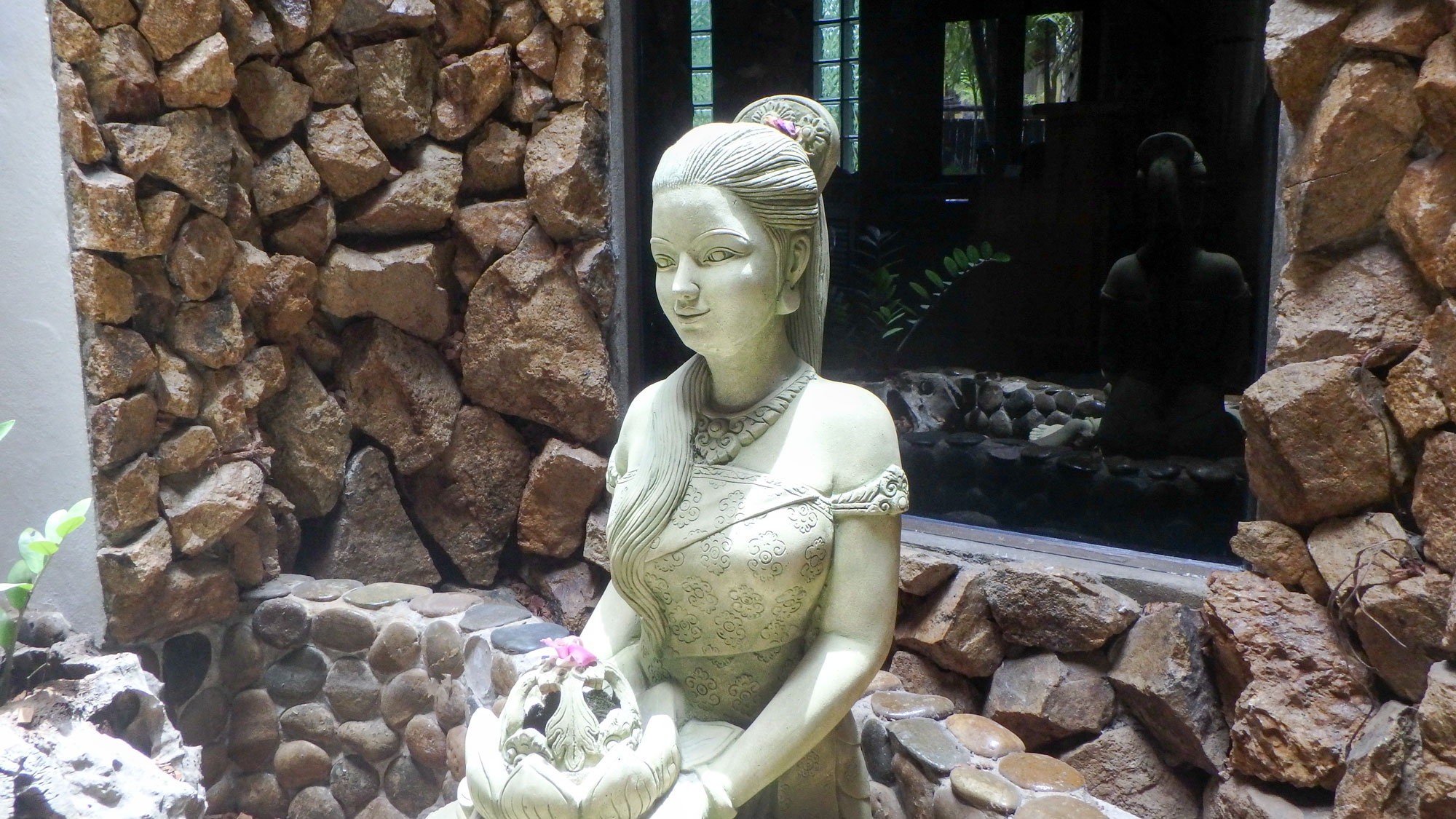 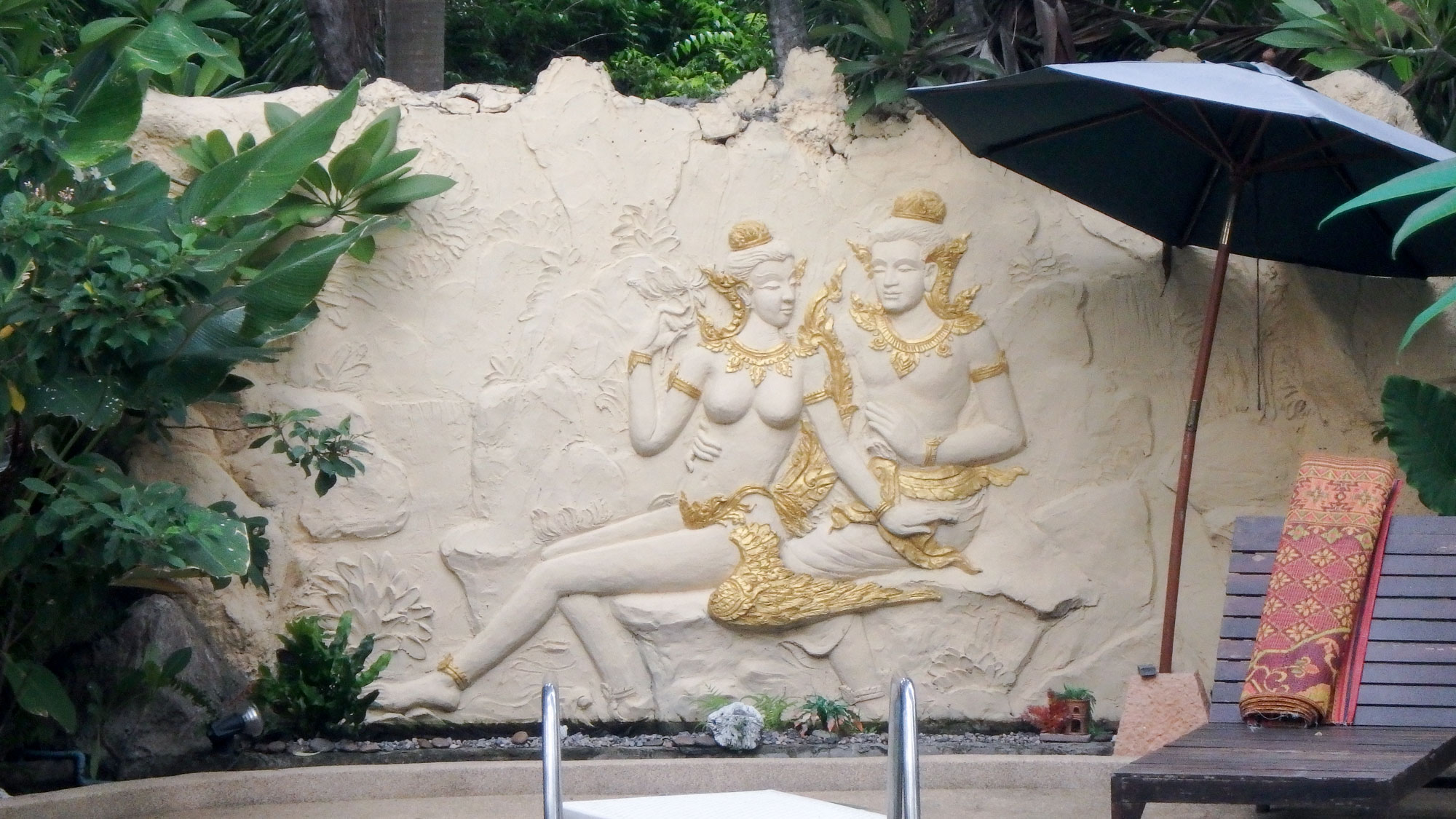 In retrospect, it's easy to say that the first week turned out great. But if I'm being honest, there was a rough patch on the first day. I was not yet acclimated to my new environment and began having doubts about our first week. Unsurprisingly, Meghan handled it all with a much sunnier outlook.

First, to access the beach from our villa required a ~500 meter walk along Koh Samui's ring road. Pedestrians are second class citizens in Koh Samui and the traffic patterns are absolutely hectic (more on that later). For the uninitiated, this walk felt like a constant near death experience.

Second, our first full day was overcast. The beach didn't look so great and left a negative first impression.

Third, our location felt isolated without many options for food or entertainment. It was claustrophobic with walking as our only means of transportation.

All of these concerns were promptly addressed by the second day. The weather was sunny and beautiful, revealing a picturesque beach with white sand and clear water, and we got ourselves a 115cc motorscooter, opening the entirety of the island. 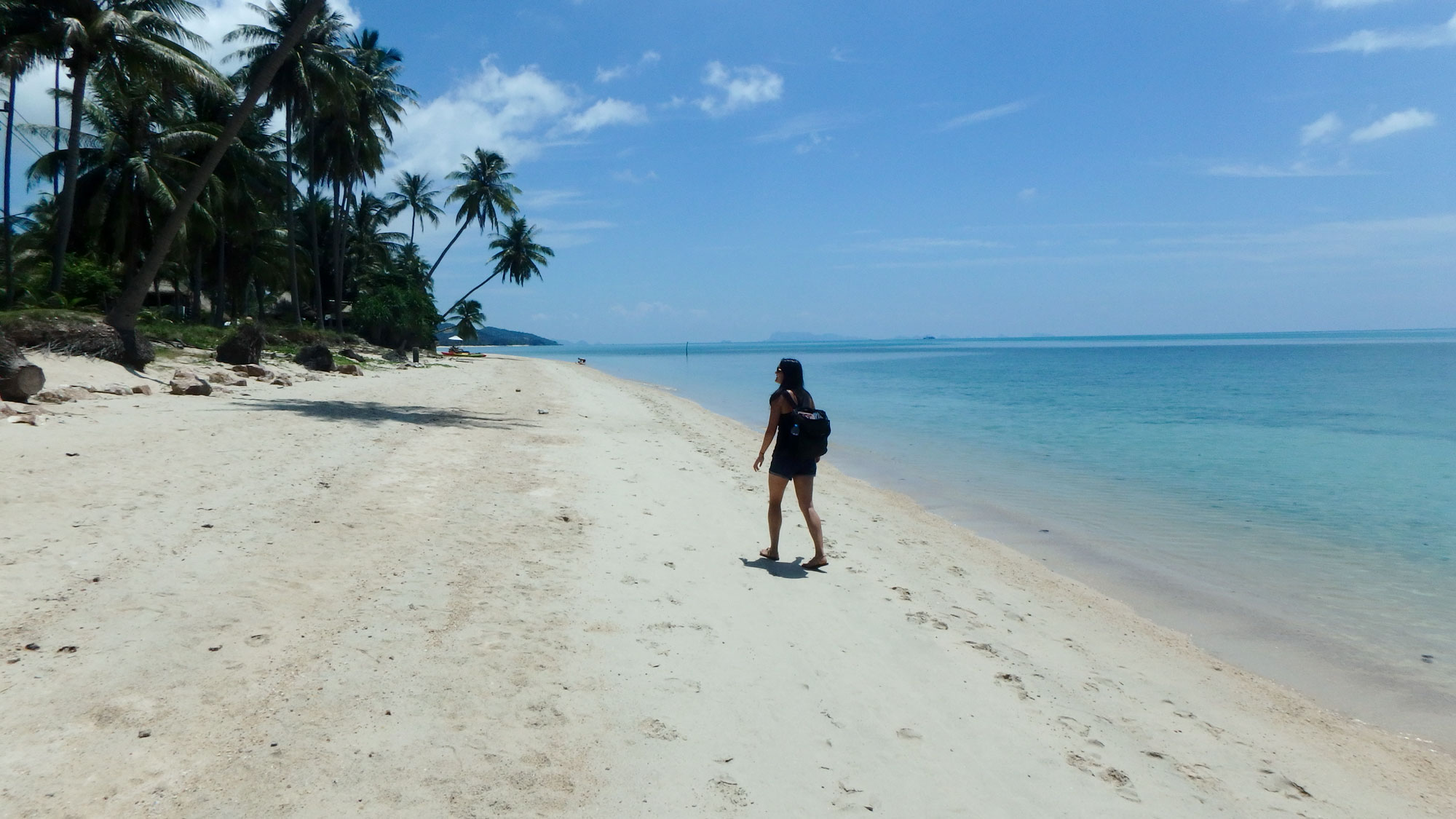 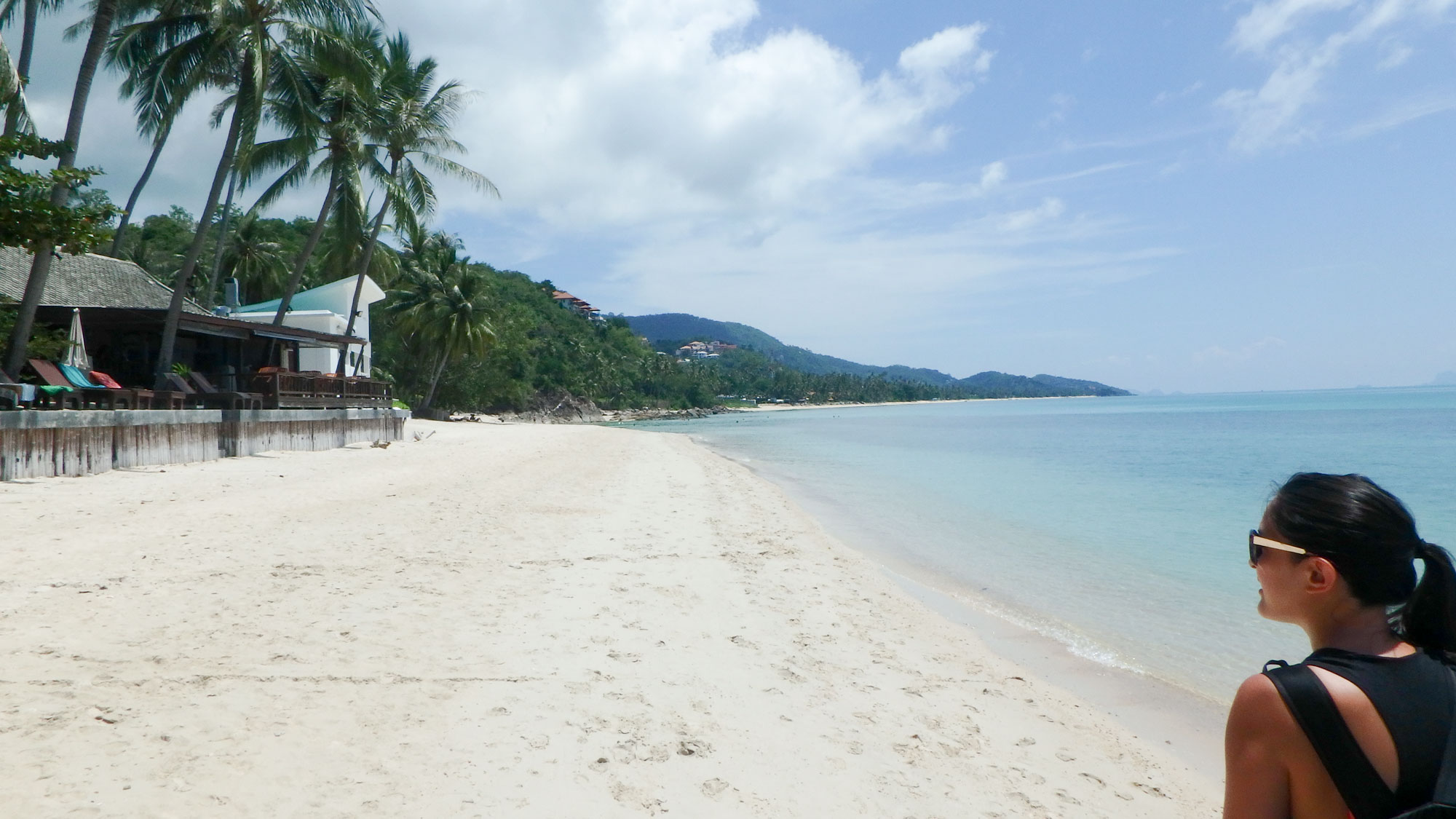 We quickly fell into the routine of waking up at 6:00 AM, writing some morning words, going for a run, cooling off in the pool, making breakfast, going to the beach, alternating between sunning & reading and swimming, eating a lunch of pad thai at our local beachfront restaurant,[^n] resuming beachtime, heading home for a swim and shower, getting a thai massage,[^n] then getting dinner.

Not a bad week.

Our greatest excitement came in the form of scooter excursions around the island. A quick aside on motorscootering in Thailand: it's fucking insane. I know many of you have experienced this before, either in Thailand or other developing countries, and are therefore unimpressed, but my first few rides through traffic were white knuckle, jaw clenching, near death experiences. Other motorists alternate between aggressively passing you on either side for no apparent advantage or driving obnoxiously slow; every few minutes someone going in the opposite direction decides to drive in your lane to pass traffic; and obstacles such as stray dogs, feral chickens, and pedestrians fly at you from all directions with little notice. Scootering can be a lot of fun for us now, usually, and it's laughably inexpensive and fuel efficient.[^n] But the lack of traffic rules can be nervewracking. And they drive on the wrong side of the road. 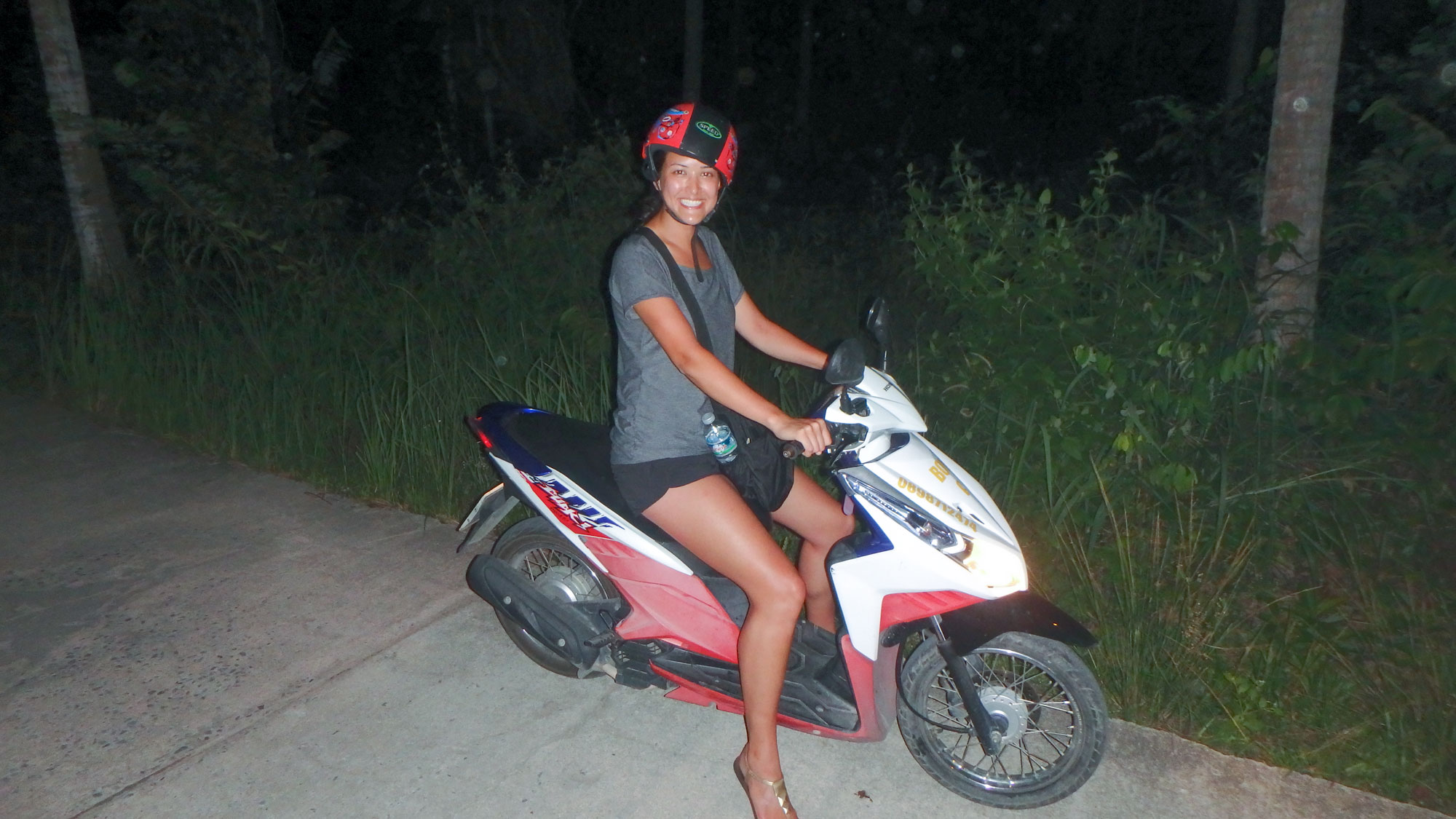 Meghan doesn't actually drive -- we sit tandem -- but this is the best photo of the scooter I have.

We ended up spending six lovely days in Mae Nam before deciding to move to the nearby island of Koh Tao the following Monday morning, July 27th.

We decided to go to Koh Tao because it was only a 90 minute ferry ride from Koh Samui and we heard it was a really inexpensive place to get our scuba diving certifications, perhaps one of the least expensive places in the world. 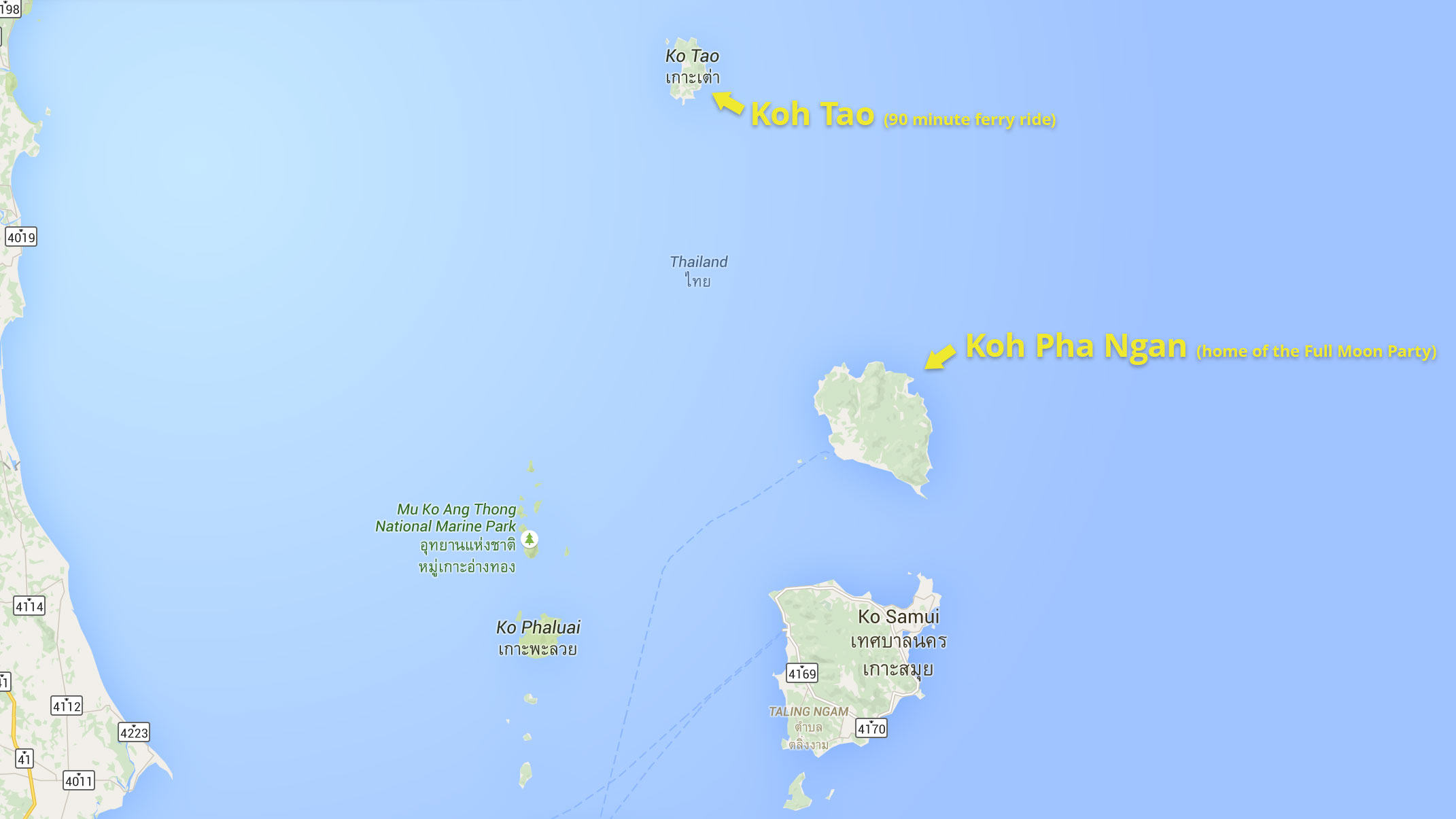 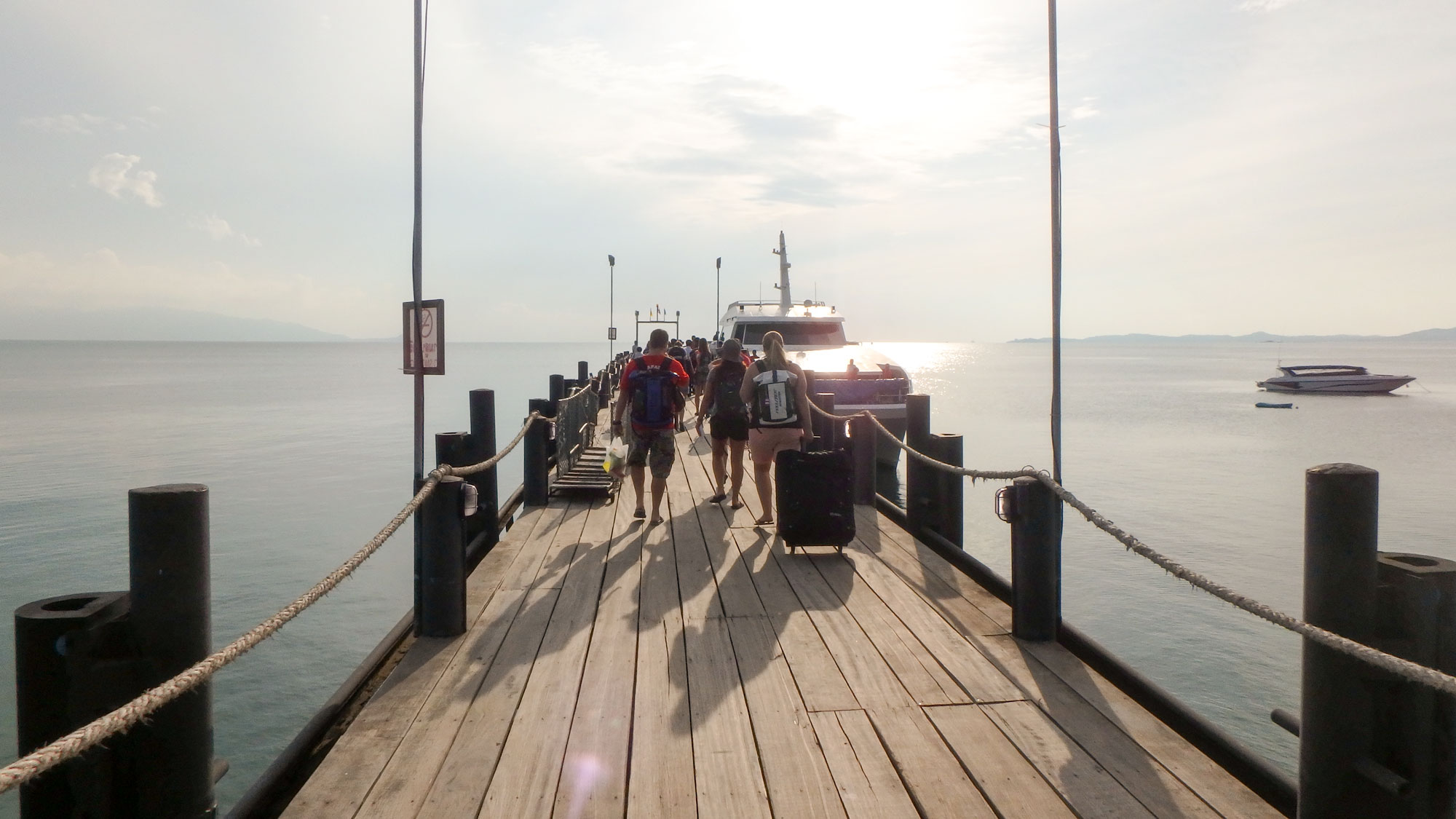 I can't say that scuba diving is something that I've always yearned to do, but I caught the itch to dive in a serious way after watching the S/V Delos youtube videos. It turned out to be everything I hoped it would be and we're now Open Water certified. After some more experience, we'll probably pursue our advanced rating in the Philippines so we can go deeper. 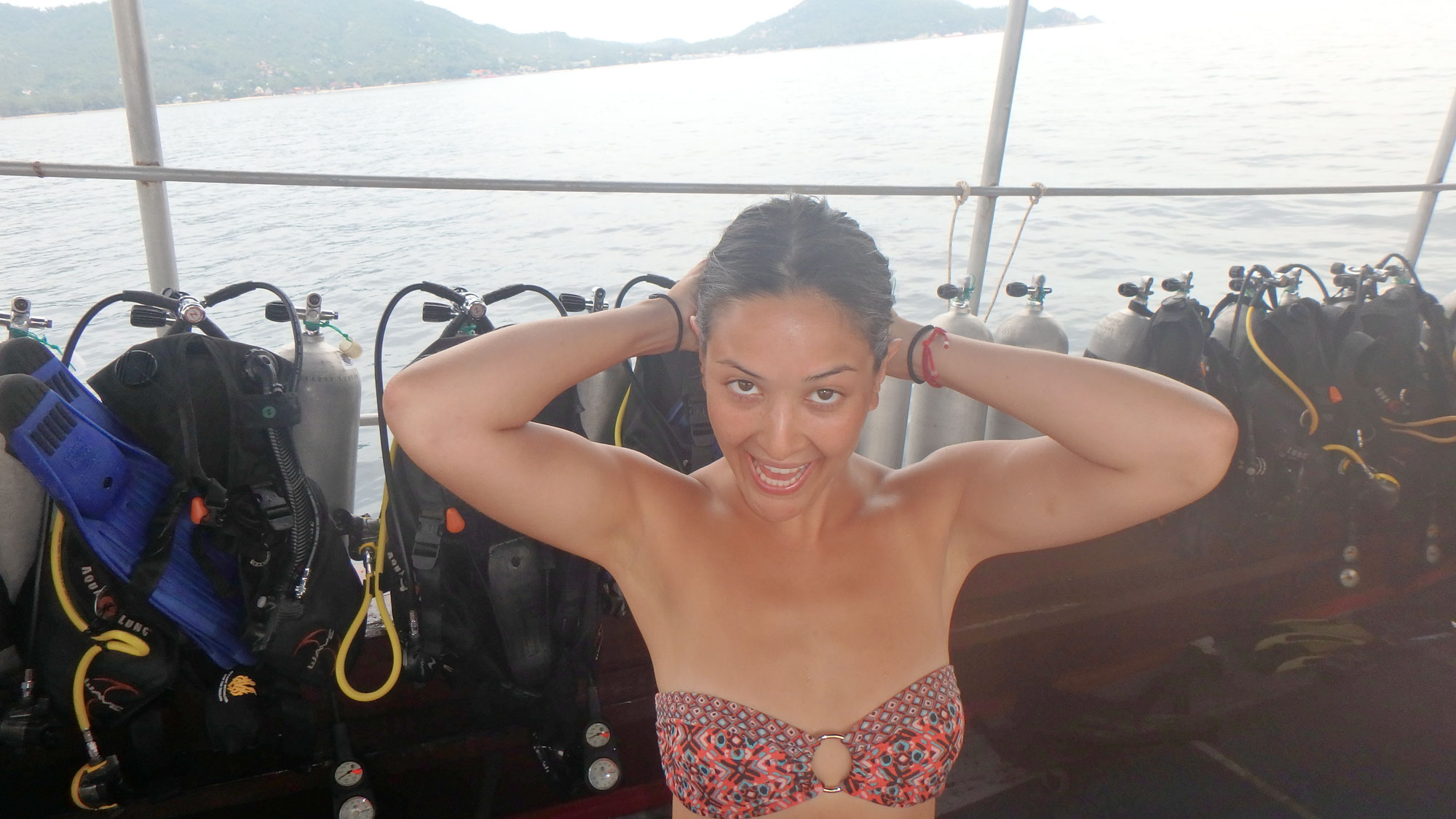 Meghan getting her hair ready to dive. 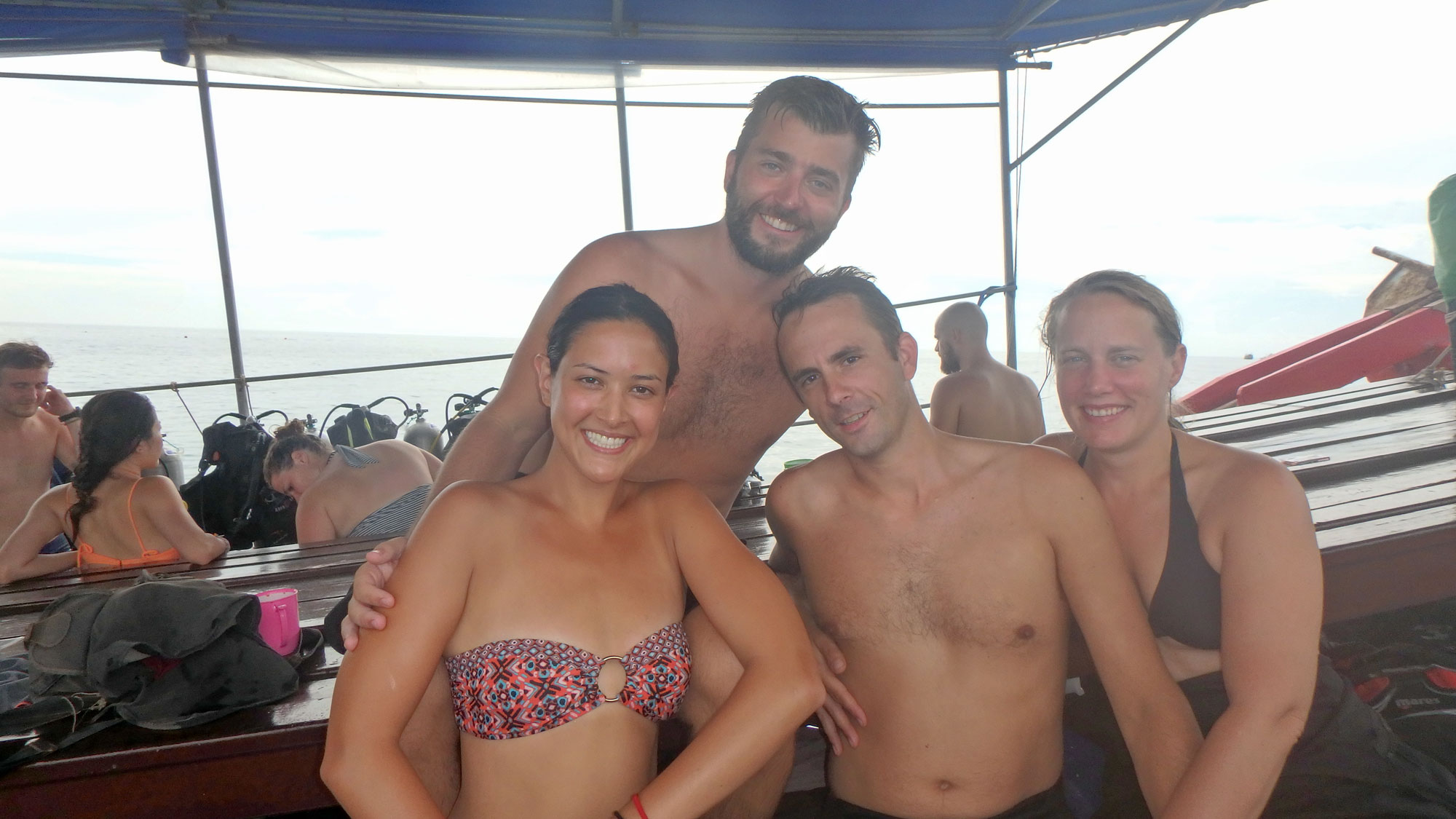 Meghan and me with our diving buddies from Belgium, Ruben and Freija. 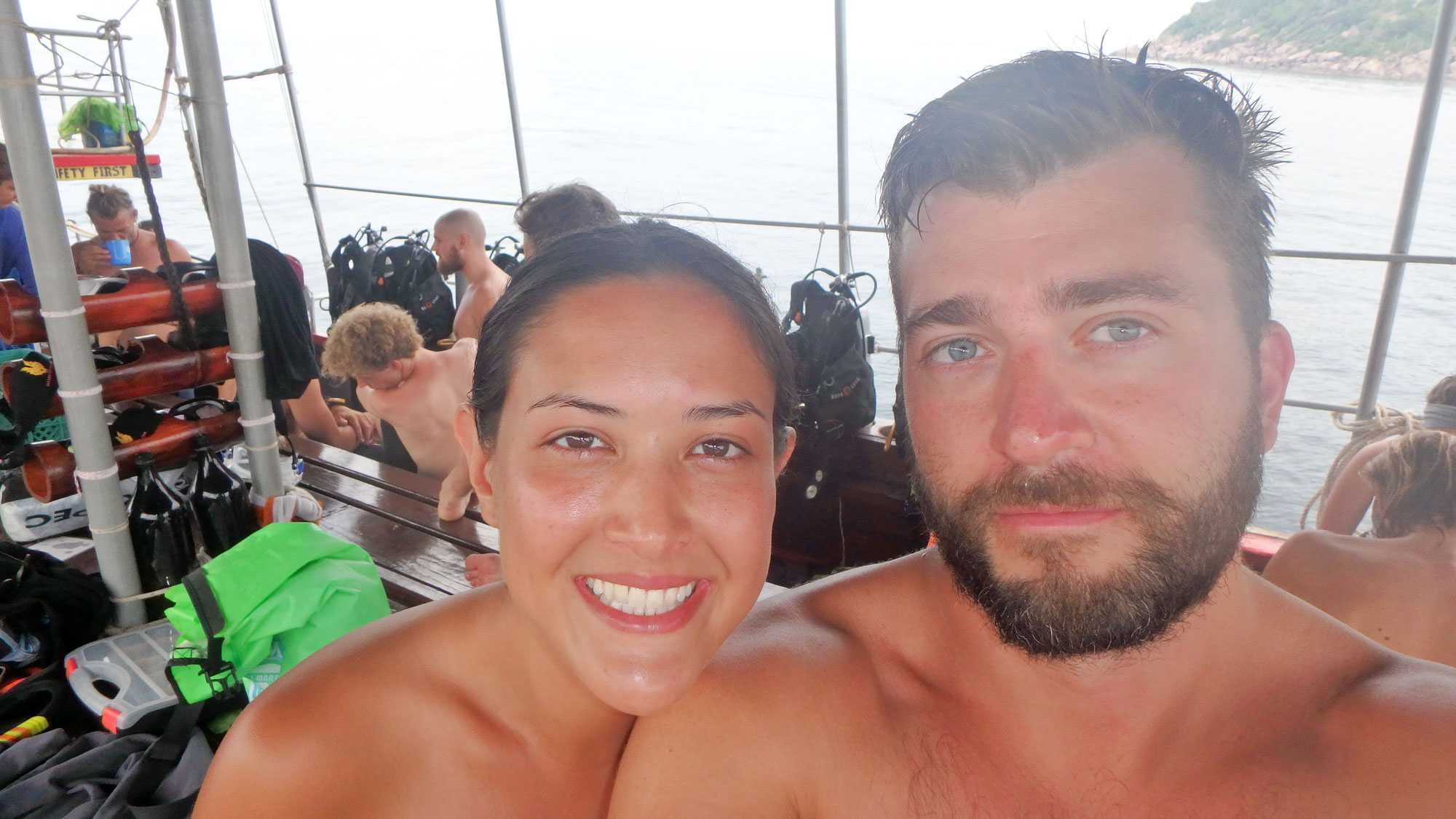 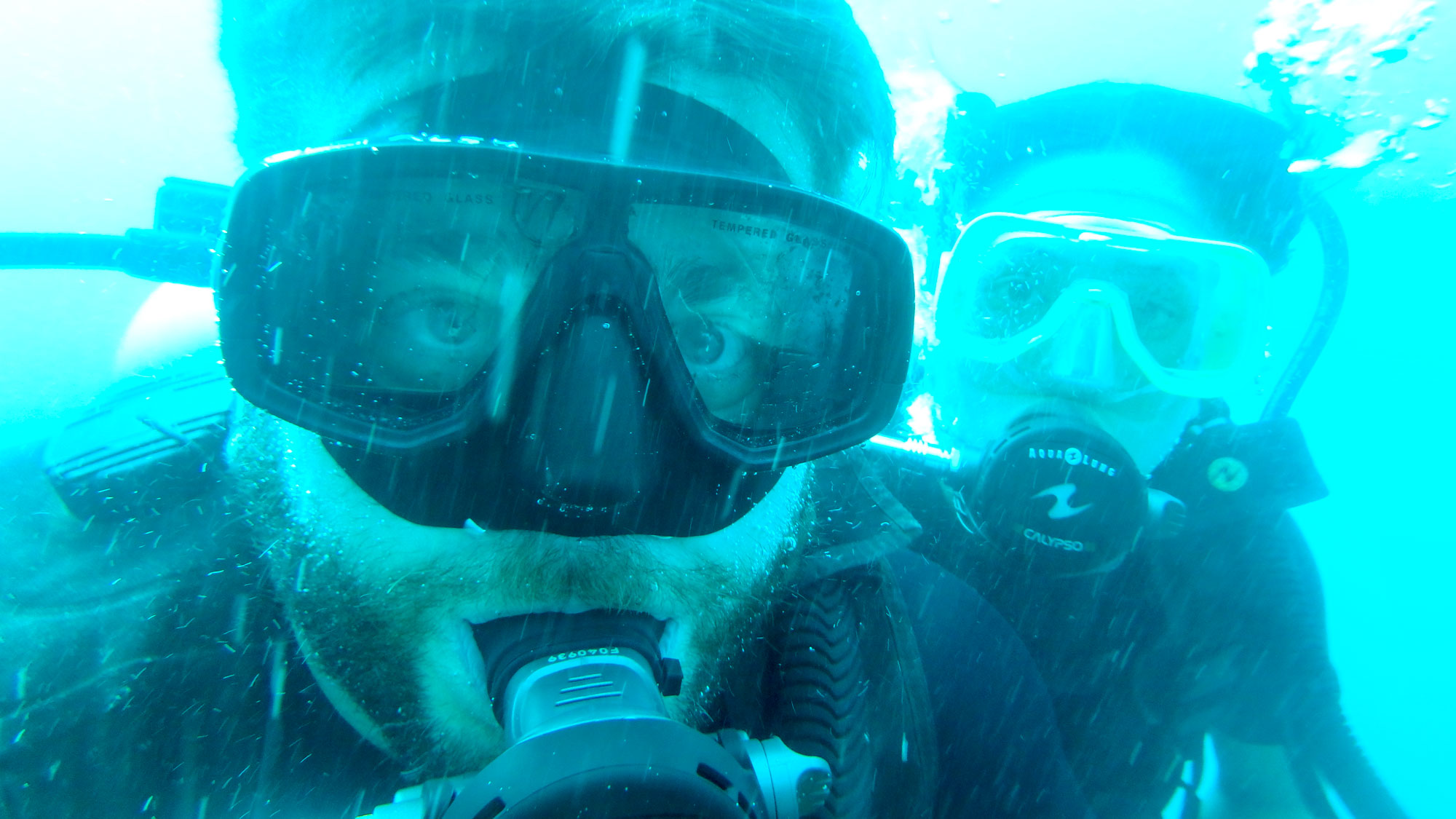 Diving selfie. I told you this was going to be a clichéd blog post. 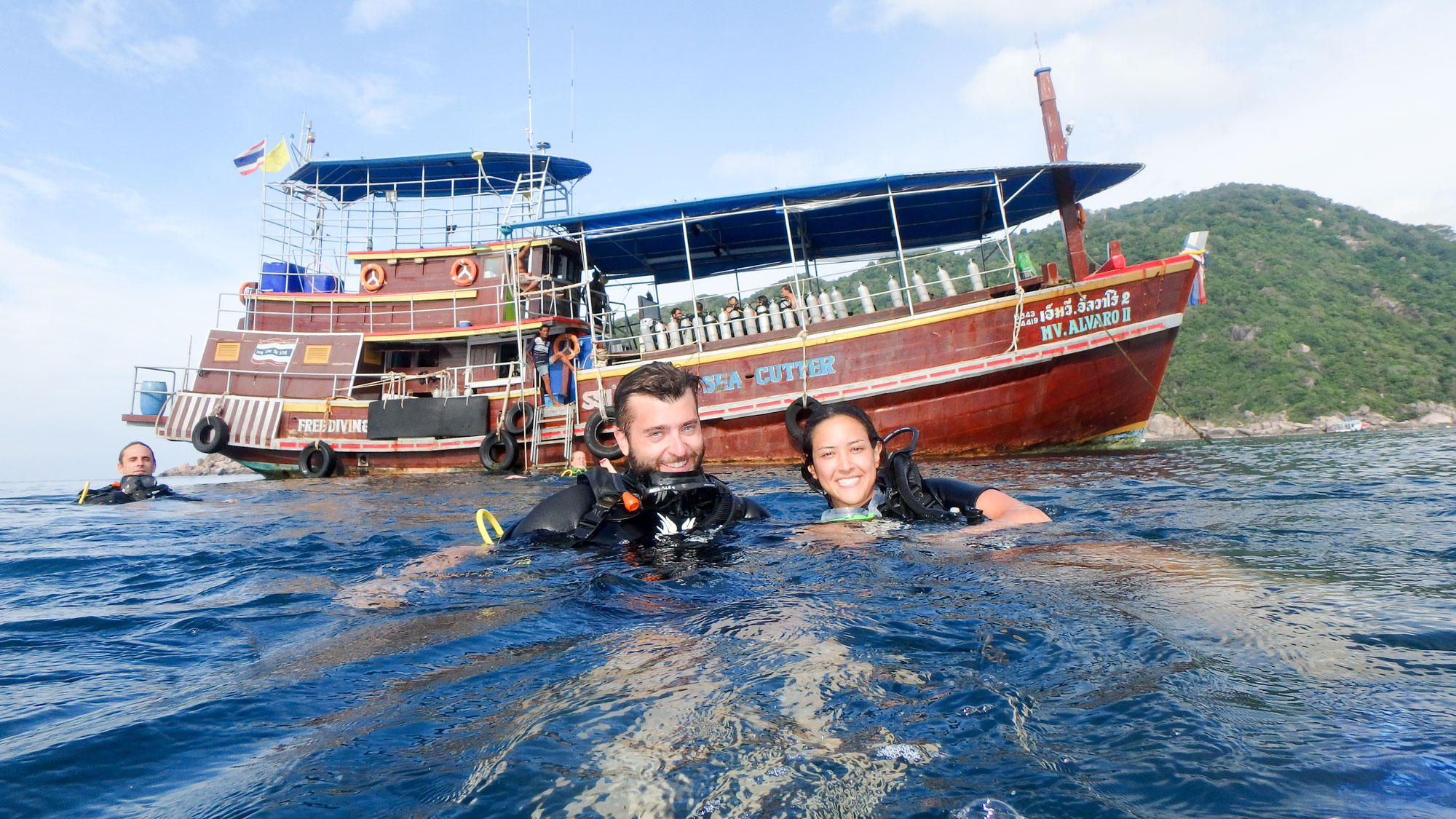 Returning to our dive boat, the Sea Cutter, after a dive.

Aside from diving, Koh Tao has a really interesting population and culture.

The instructors and divemasters form one pillar of the local population. These are the stereotypical thrillseeker types you'd expect to find living on a chilled out tropical island: long hair, cropped as aggressively as their creative limits will allow; tattoos, preferably nautically themed; multiple piercings, again as aggressive as possible (the nape piercing seems to be especially en vogue with the Europeans right now, particularly the French); questionable personal hygiene; chainsmoking, with bonus cool points for handrolled cigarettes; and so forth. You get the picture. A real "road not taken" bunch. A majority of the diving professionals seem to be European with local Thais handling the boats. At the diving school we attended, the instructors were from England, France, Germany, Spain, Chile, and the Netherlands.

The backpackers form the next pillar of the local population and these are the prototypical early to mid-20s Europeans on a budget. The first sentence on Wikitravel describes the island as "geared towards diving tourists more than backpackers on a budget." I now find this amusing because after spending a week on Koh Tao, I'd describe it as backpacker heaven. Backpackers were all over the place, from the very first moment we stepped off the ferry.

The backpacker and instructor populations combine to support a healthy party culture. It also helps that Koh Tao is a stone's throw away from Koh Pha Ngan which is the home of the "Full Moon Party." There was an exodus the day before the fabled celestial event in which half the backpacker population departed Koh Tao for Koh Pha Ngan.[^n]

Finally, there are the older backpackers who visited here in late 1990s or early 2000s and never left, forming the expat community. This results in a lot of the shops and restaurants having a European flair.

Despite these somewhat cynical musings, I really did enjoy our Koh Tao experience. 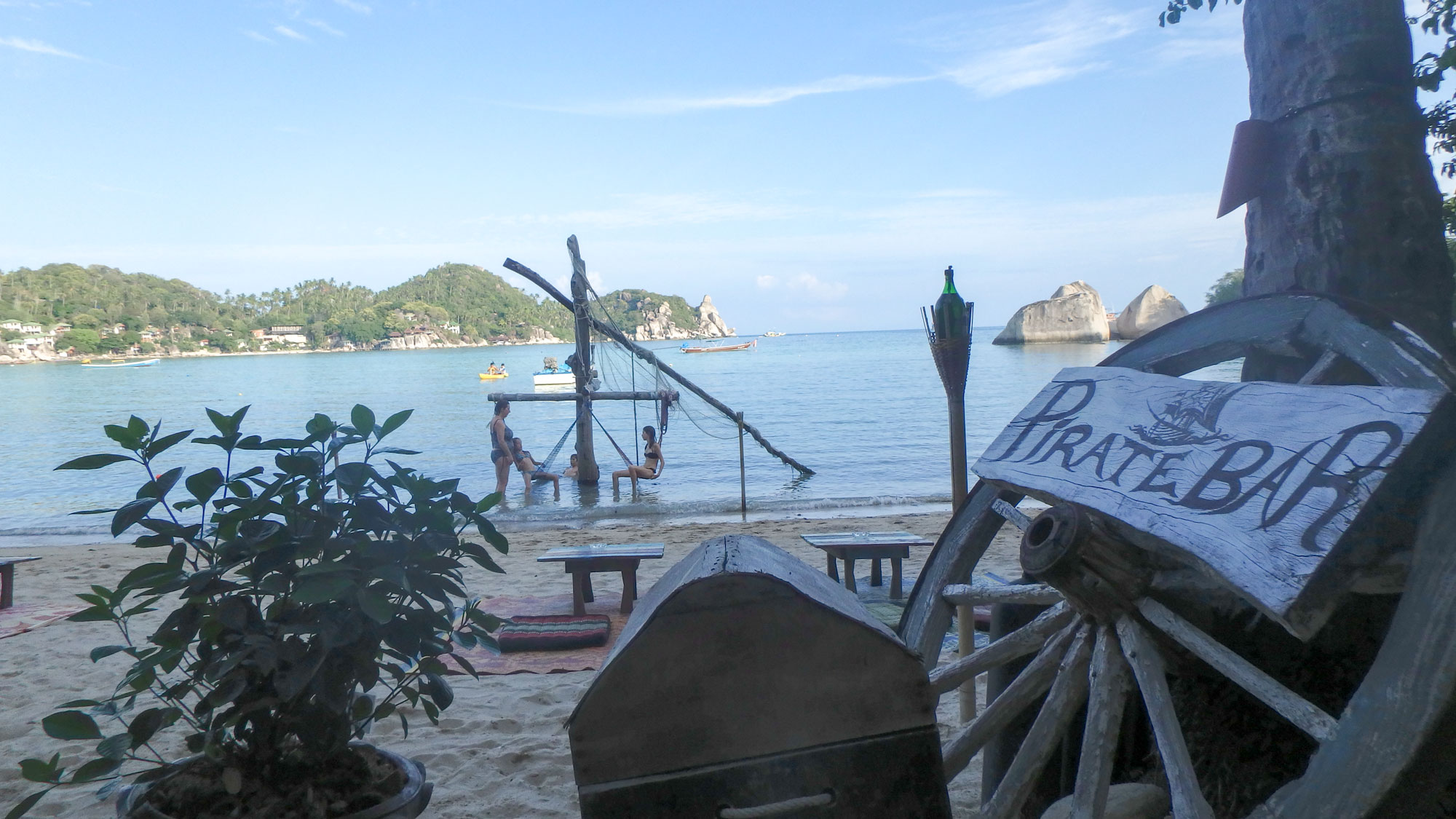 That's it for now. We're back on Koh Samui for the month of August so we'll have more time to devote to undeferred.

Shoot me an email if you want to catch up. I can generally respond to emails pretty quickly, within a day or two.

Also, I created a mailing list for updating followers when we make a post, but I haven't yet added the signup form to my core blog theme. You can manually add yourself here if you want to be notified of future posts.

And so the adventure begins!! Now that it's really here, the anticipation of leaving behind work, family, and friends…

We leave for Thailand on July 19th. We will promptly begin work on this site once settled.…