After spending a few weeks on the ever popular Indonesian island of Bali, we were excited to take a step off the beaten path and visit a nearby chain of tropical islands called "The Gilis." The Gilis are three specks of white sand known for their beaches, laid-back atmosphere, and freedom from motorized vehicles — an ideal setting for some tropical glamping at La Cocoteraie Ecolodge.

To get to the Gilis from Bali, you need to take a makeshift "fast boat" some 50 kilometers across the Lombok Strait. Local Indonesian operators strap on as many outboard engines as will fit on their boats' sterns and punch it, full throttle, hence the name. Our glamping adventure was off to a quick start. 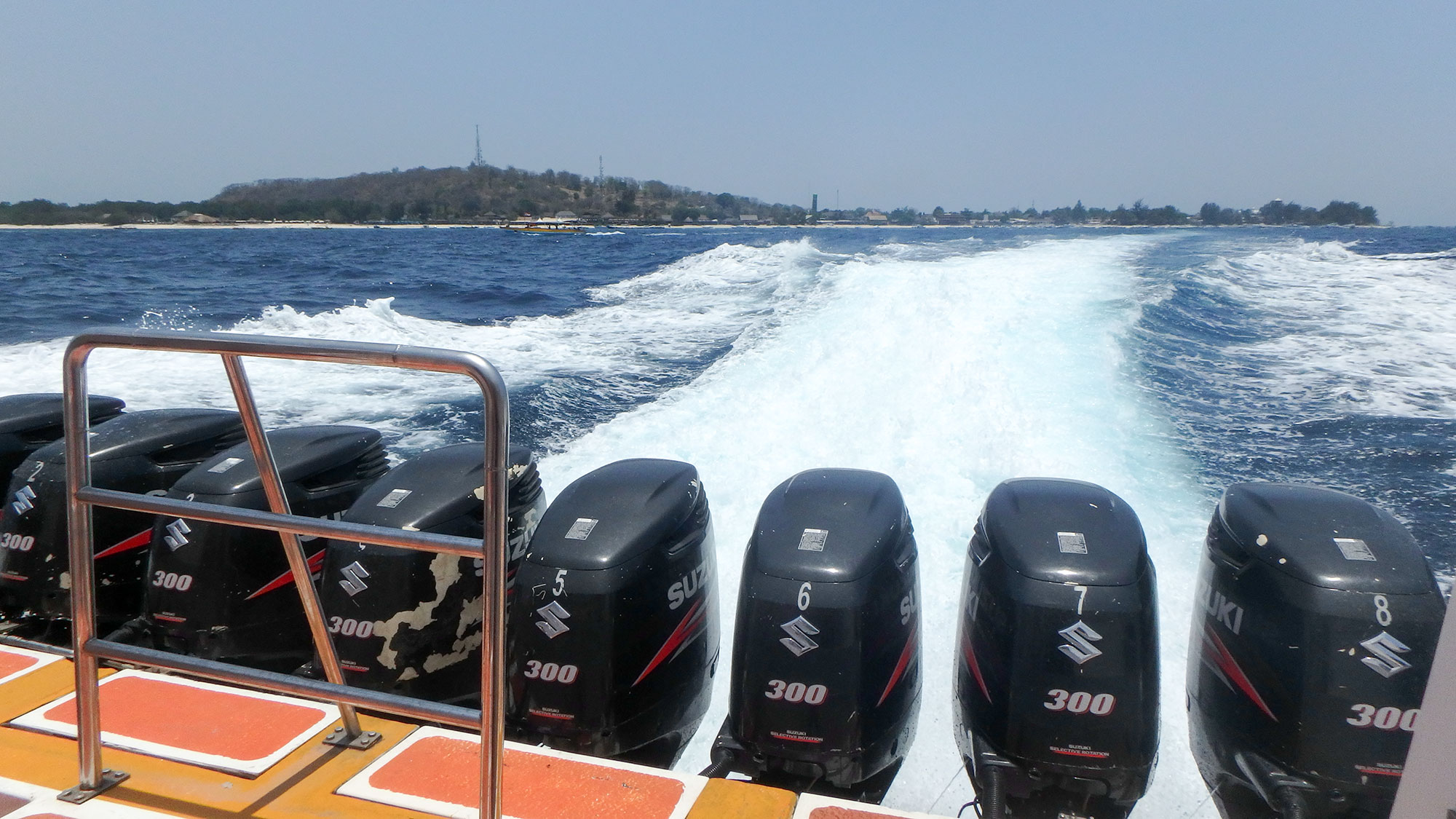 Two bumpy hours later, we were deposited on the eastern shore of Gili Trawangan — or Gili T — as it's known. 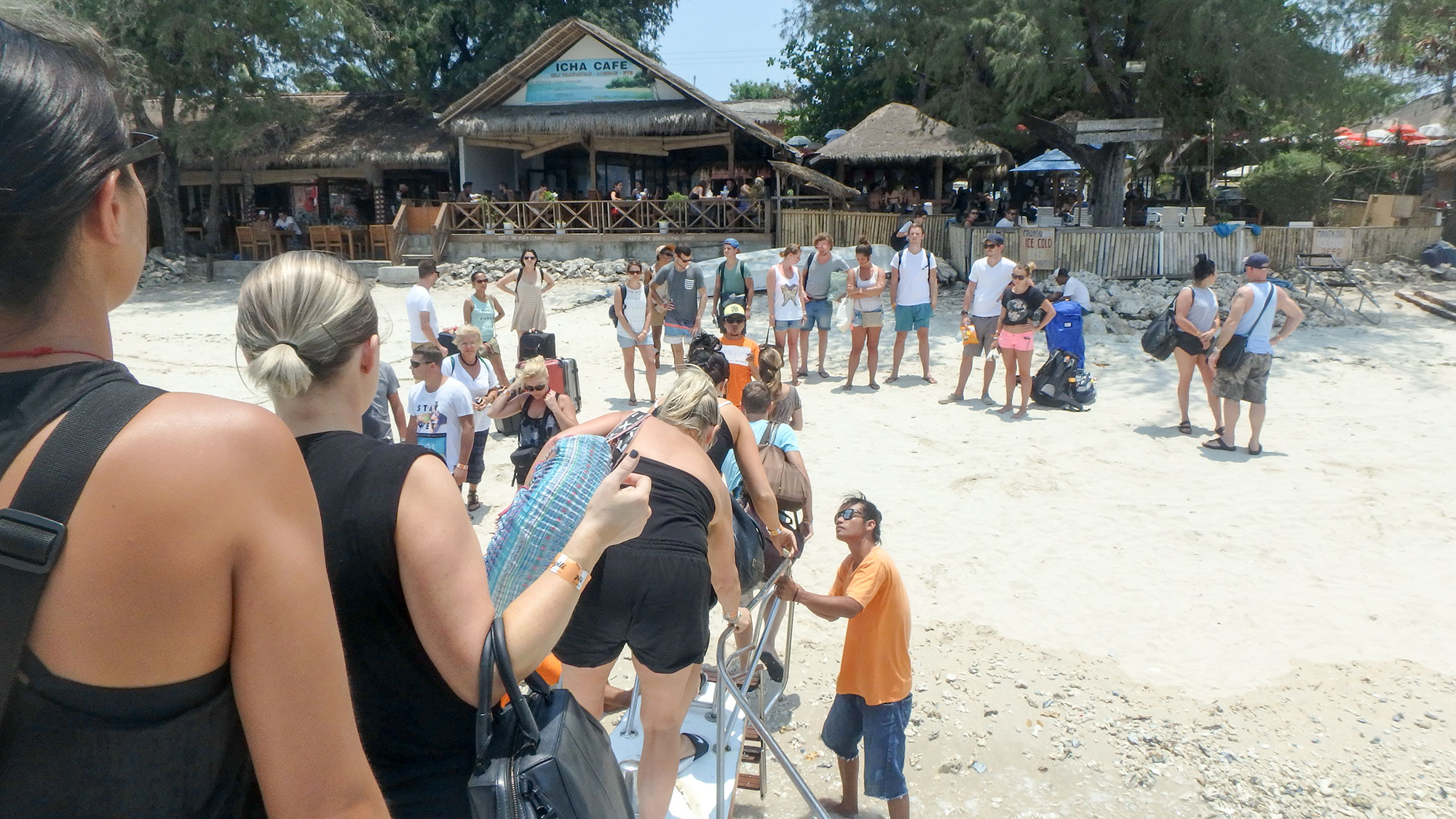 Gili T is the largest and most developed of the three Gilis. It also has a reputation as a bit of a backpacker destination which we sensed immediately. While we have nothing against backpackers, we tend to favor more tranquility these days. Fortunately, La Cocoteraie is located on the western side of Gili T where it's much, much quieter.

To get to the other side of the island with our luggage required a ride in the island's signature mode of transportation: a cidomo (or "one-horse carriage"). Rather than circumnavigate the sandy beach ring road, the cidomo carried us briskly through the village and over dusty trails, into the heart of the tiny island. Small signs marked the faintly visible path to our destination. 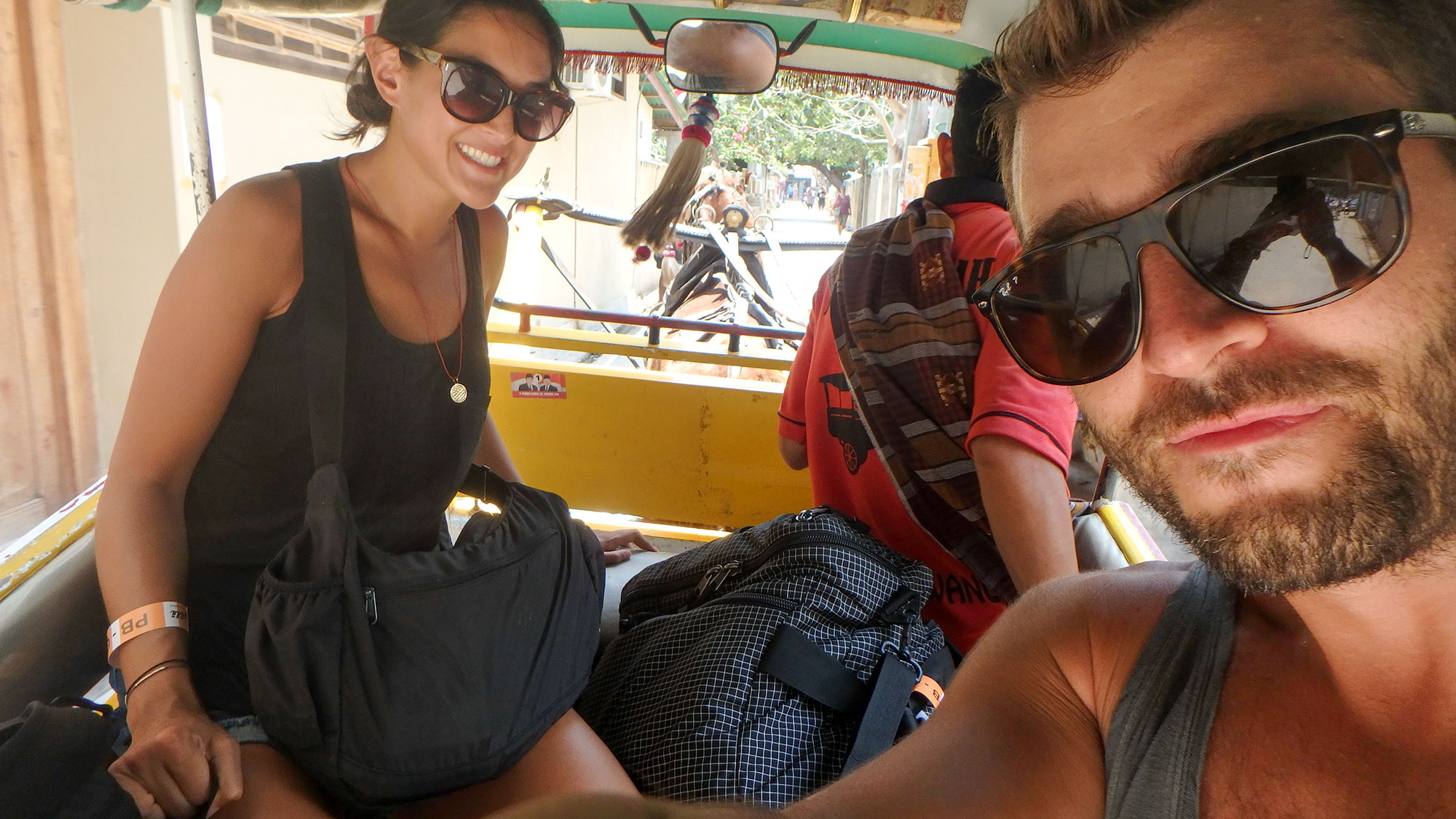 Unlike most other development on the Gilis, La Cocoteraie is not located on the beachfront. Instead, it's tucked away about 300 meters along a dirt path into the woods. It is from this location among the coconut trees that La Cocoteraie derives its name — "the coconut place" in French. This location might not work for a traditional Gili resort hotel, but it is perfect for a glampsite.

La Cocoteraie was developed a little less than three years ago as a boutique resort with eight safari tents. Each tent is identical in design with the glamping upgrades of a porch, ensuite bathroom, electricity, wifi, and air conditioning. The decor and finishes are simple, striking a perfect balance between the natural aesthetic of camping and the luxury of a hotel stay. Bamboo is prevalent throughout — from the furniture to permanent construction — connecting the generic safari tent to the tropical locale. 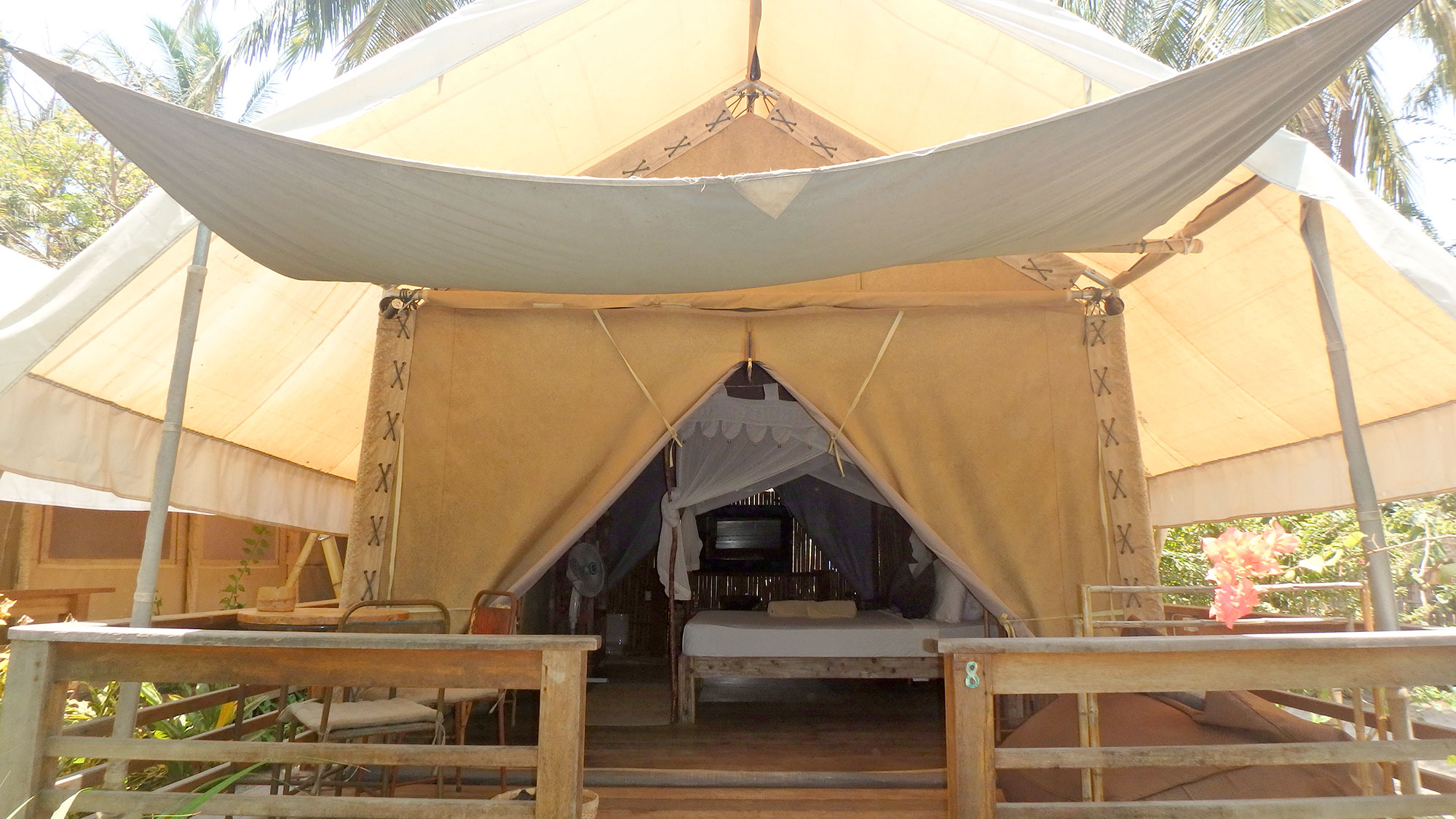 Other amenities include a modest bar & restaurant, a swimming pool, bicycles, and snorkeling gear. We love riding bikes so we immediately dropped off our bags and set out to explore Gili T. 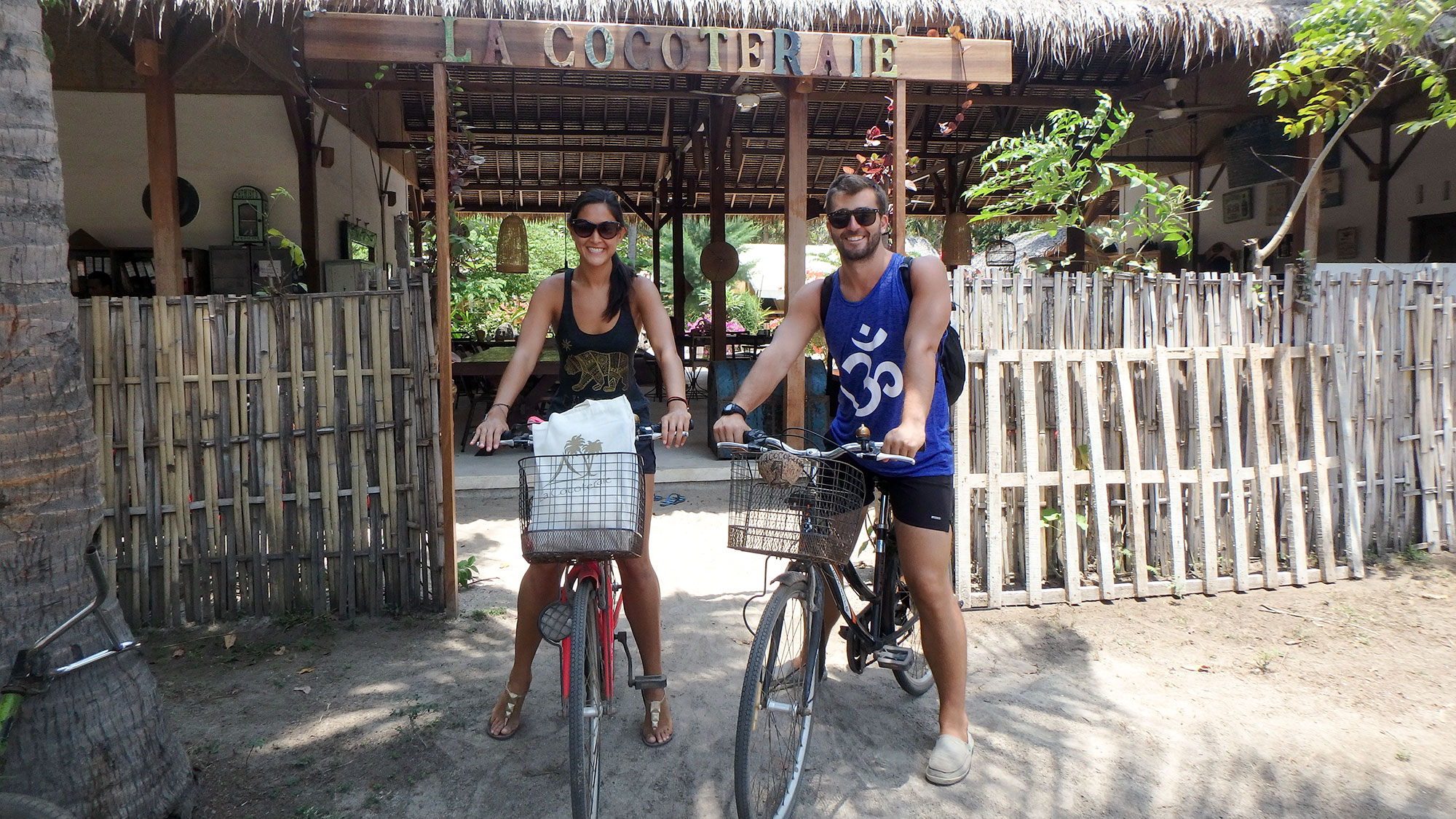 When we emerged onto the sandy loop road, we were instantly relieved to see that the western coastline is significantly less developed, still retaining some of that tropical paradise feel. We followed the coast north and then east to a beach where we were told sea turtles abound. Unfortunately, the swells were too powerful so we decided to pack it in before we spotted any turtles.

Another perk of the west coast of Gili T is its view of the sunsets. The sunset is celebrated nightly and you have a variety of "scenes" to choose from, ranging from club hits to live acoustic bands. We opted for the chilled out drum sesh at The Exile, which also sold the coldest beer I've enjoyed in over ninety days of tropical travelling. My kind of place. 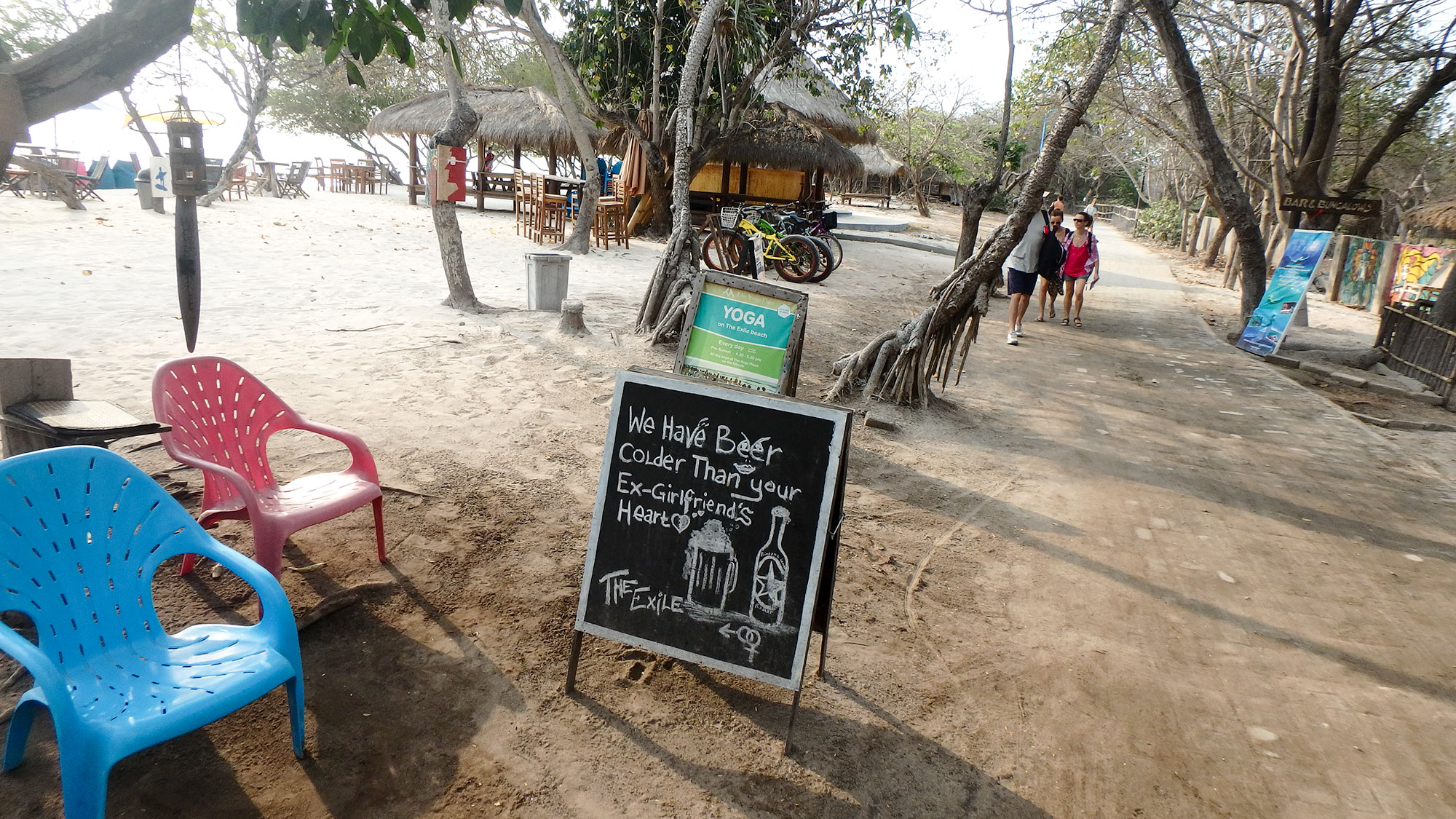 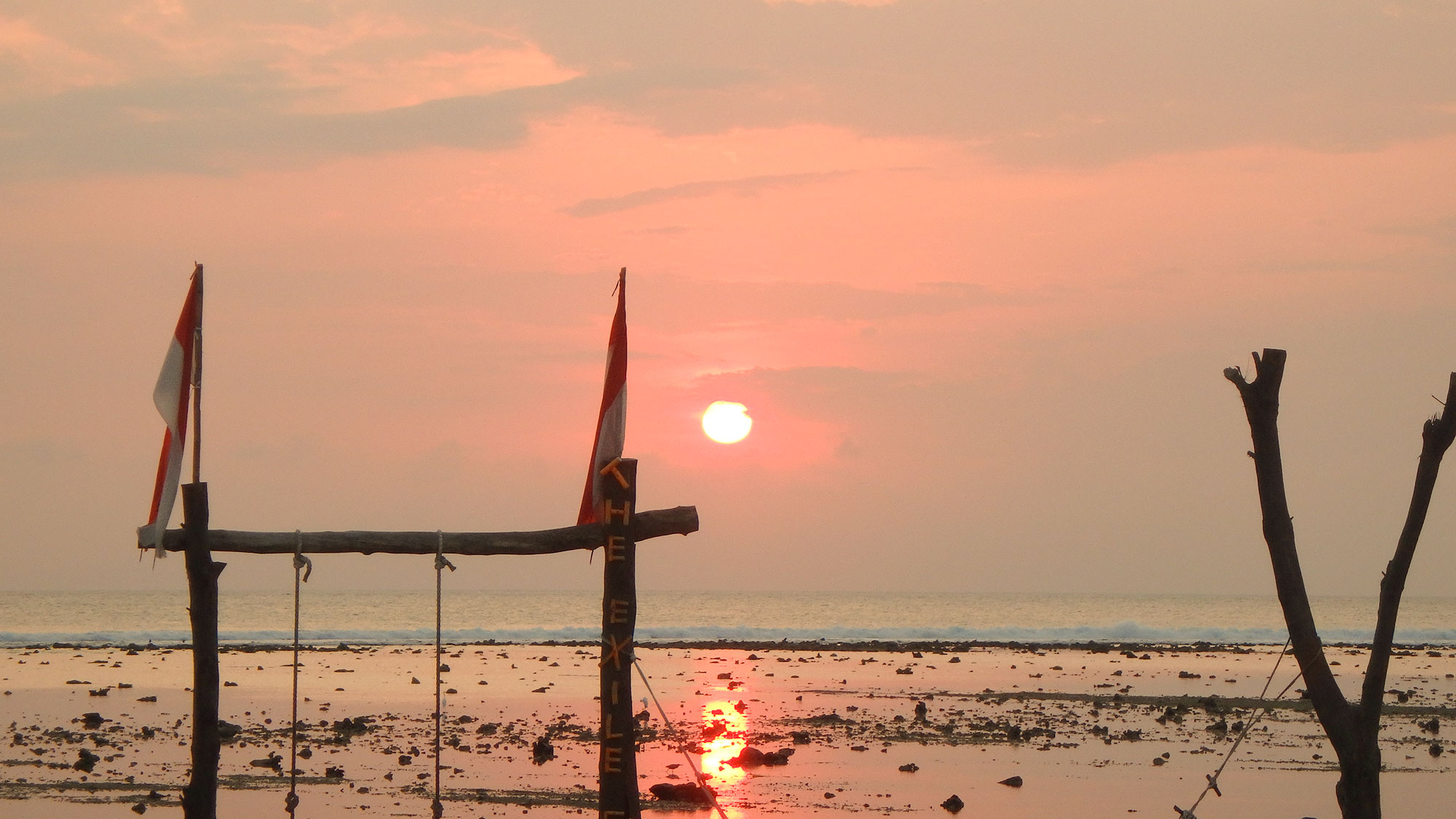 After the sunset, we went for dinner "downtown" on the other side of the island. By the time we finished our nasi goreng, things were already starting to get a little rowdy, so we skipped town and set off on a harrowing bike ride back home through the darkness. Thanks to our trusty headlamps, we made it to La Cocoteraie in one piece, giggling about a close encounter with a baby goat and his irritable mother. These are the kinds of adventures you don't usually get staying in a normal hotel.

It had been a long day and we were exhausted. Before going to bed, however, we had an important decision to make: au naturale or air conditioning? After much deliberation, we finally decided to zip up the tent flaps and activate the aircon. Call us "soft" if you want — we don't care. What's the point of glamping if you're not going to enjoy some of its glamours anyways?

In the cool and quiet, we slept like babies.

The rest of our Gili T adventure was spent in much the same way as our first day: exploring the island on our bikes, lounging on the beach, hunting for turtles, and enjoying the sunset. La Cocoteraie was the perfect home base, showcasing the best side of Gili T while offering a genuine tropical glamping experience among the coconut trees.