If you build it, they will come.

These are the famous last words of real estate developers across the world who try, but fail, in their bold attempts to create something out of nothing. Occasionally, however, someone with an exceptional vision, perfectly executed, manages to prove the old adage true.

4 Rivers Floating Lodge is a boutique glamping resort located at the confluence of four rivers at the base of the Cardamom Mountains in southwestern Cambodia. Yes, you read that correctly. As the name suggests, 4 Rivers is literally located on top of a river, a construction style inspired by the floating villages native to Cambodia's countryside. 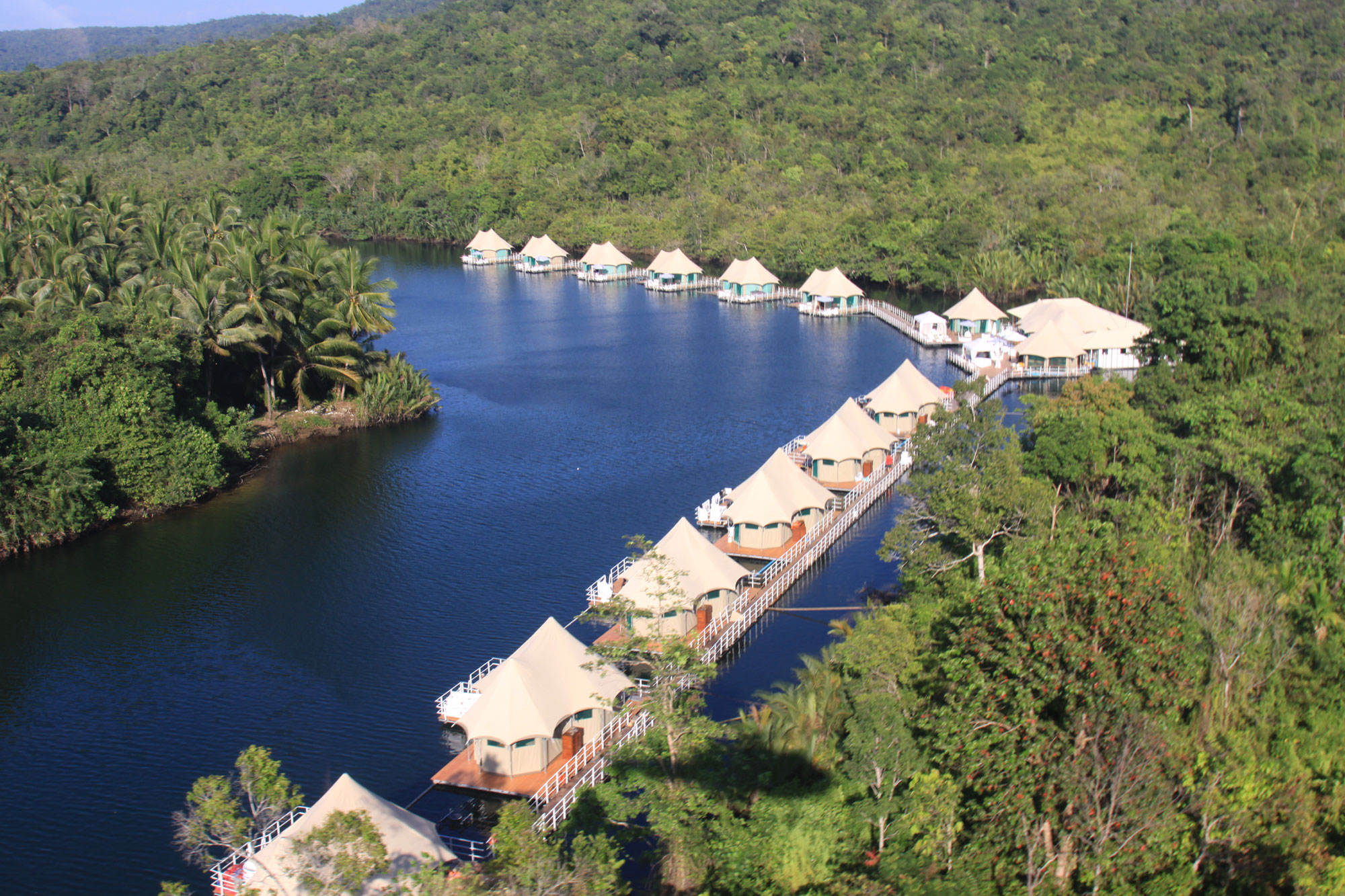 Further, the lodge is located in a remote part of an already faraway country, about five hours west of Cambodia's capital city, Phnom Penh. But this did not deter us or thousands of other travelers. Like I said, "build it and they will come" occasionally works out.

Our trip started with an adventure: a harrowing, five-hour bus ride during which our driver played chicken with oncoming traffic the entire time. We spent most of the ride with our eyes closed, teeth clenched. All part of the experience, I guess. Once deposited in the village of Tatai, our journey continued with a longtail boat ride down the river. 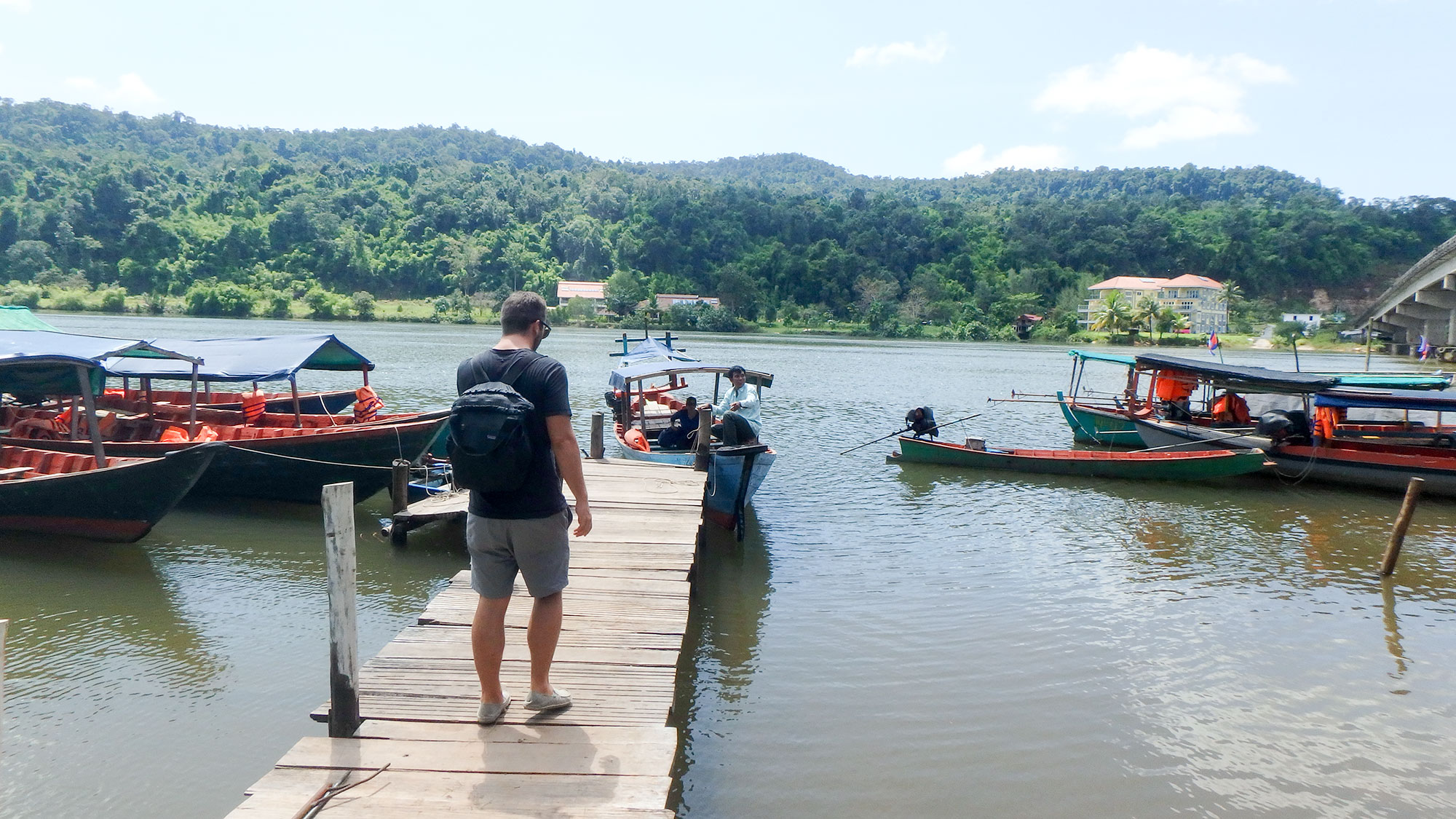 4 Rivers Floating Lodge is only accessible by boat, naturally. After twenty minutes of putt-putting down the river, the secluded resort finally appeared in the distance, around a bend, tucked between the eastern bank and a small island. 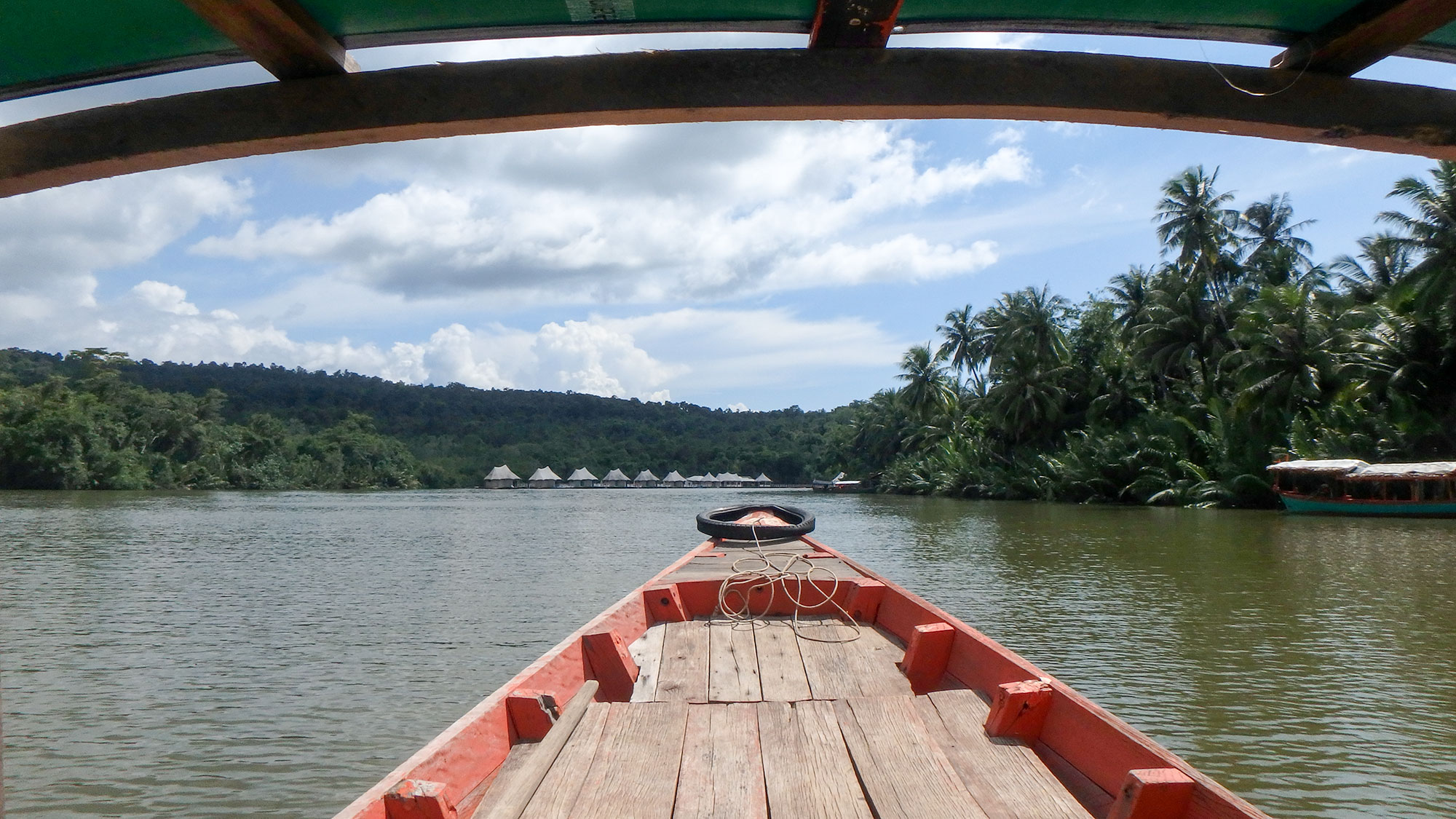 Even though we knew what to expect, landfall — or shall I say "tentfall" — was still astonishing. There's something hard to believe about real estate created on top of a moving body of water.

The property, if you want to call it that, consists of a landing area in the center, which includes the restaurant, the office, a library, and some back of house operations. This central landing area is flanked by two long pontoons, with six tents each, for a total of twelve suites.

Our suite was a massive safari tent with a pitched roof, great room, and ensuite bathroom. We also had a large riverdeck with lounge chairs and swim ladder. 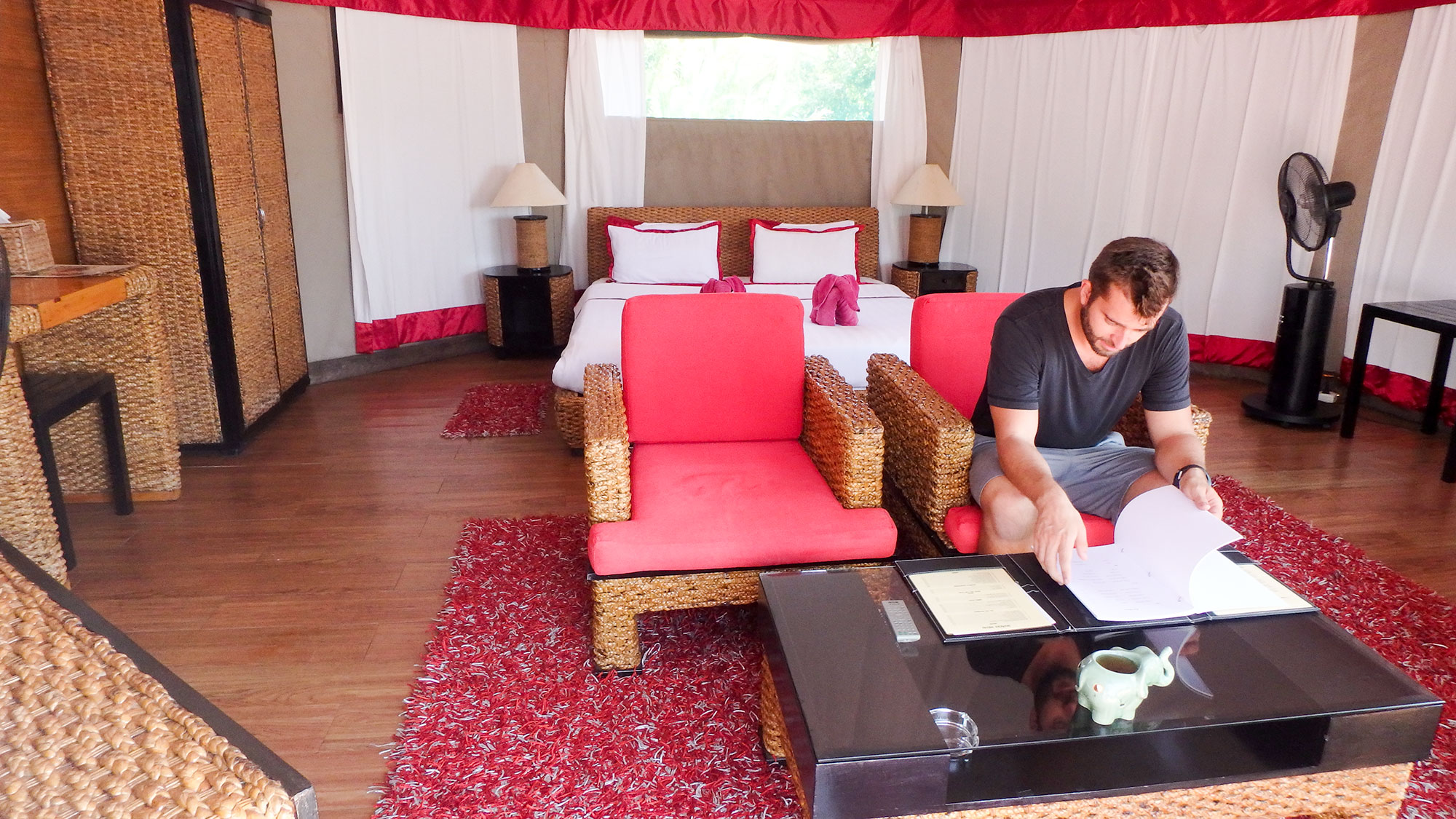 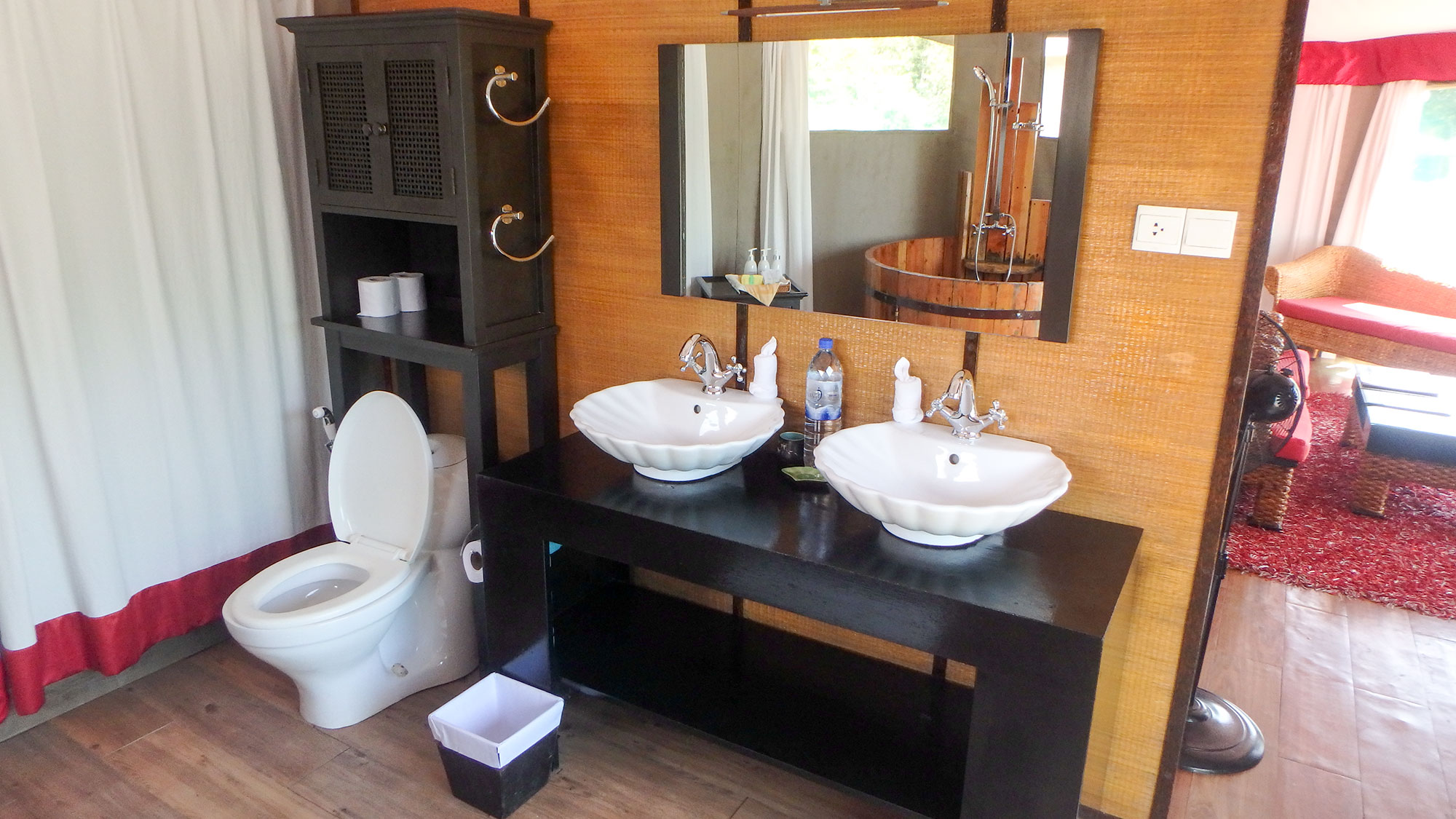 Once settled in, we spent the rest of the afternoon relaxing by the river, reading, swimming, and kayaking. 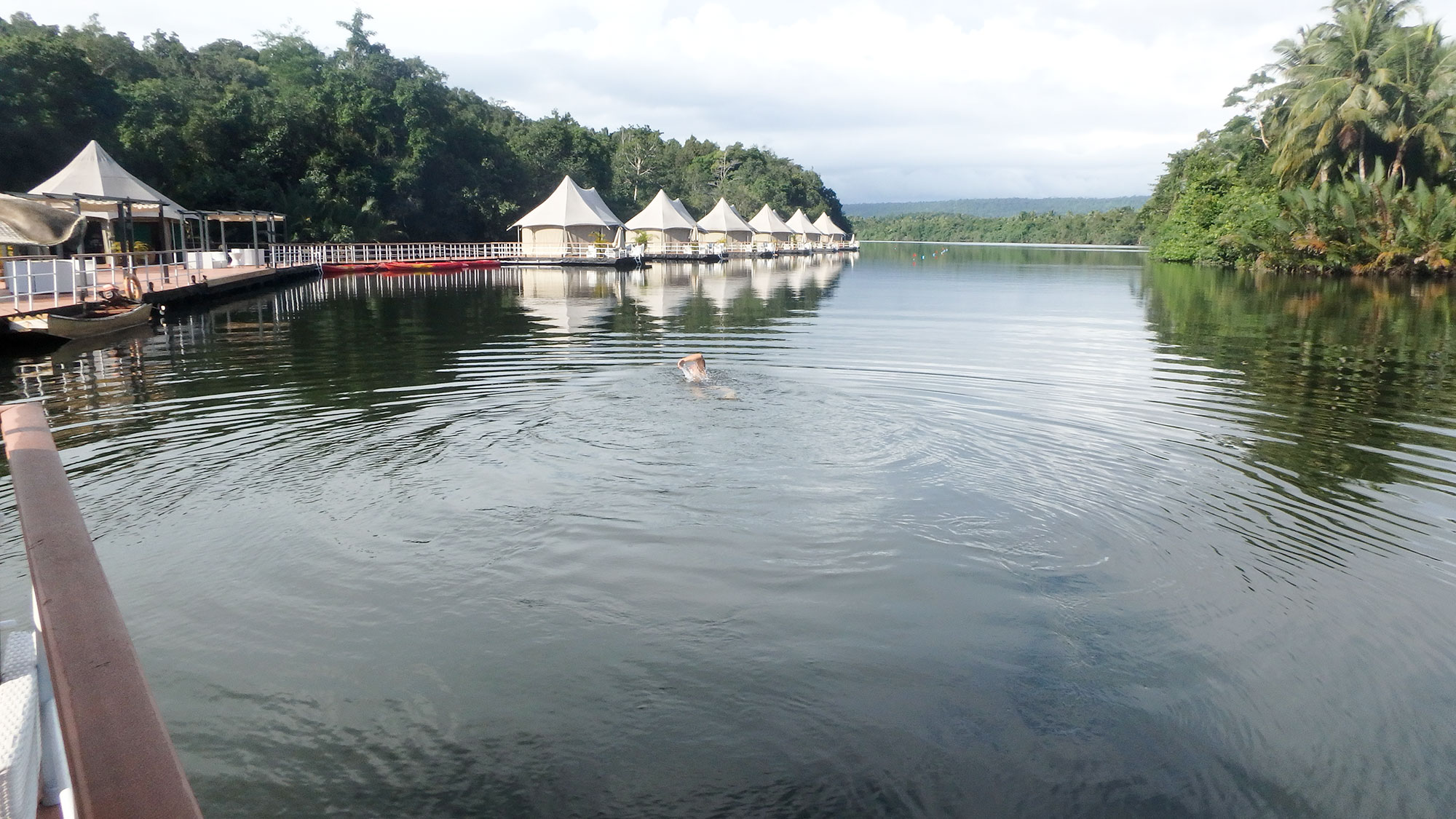 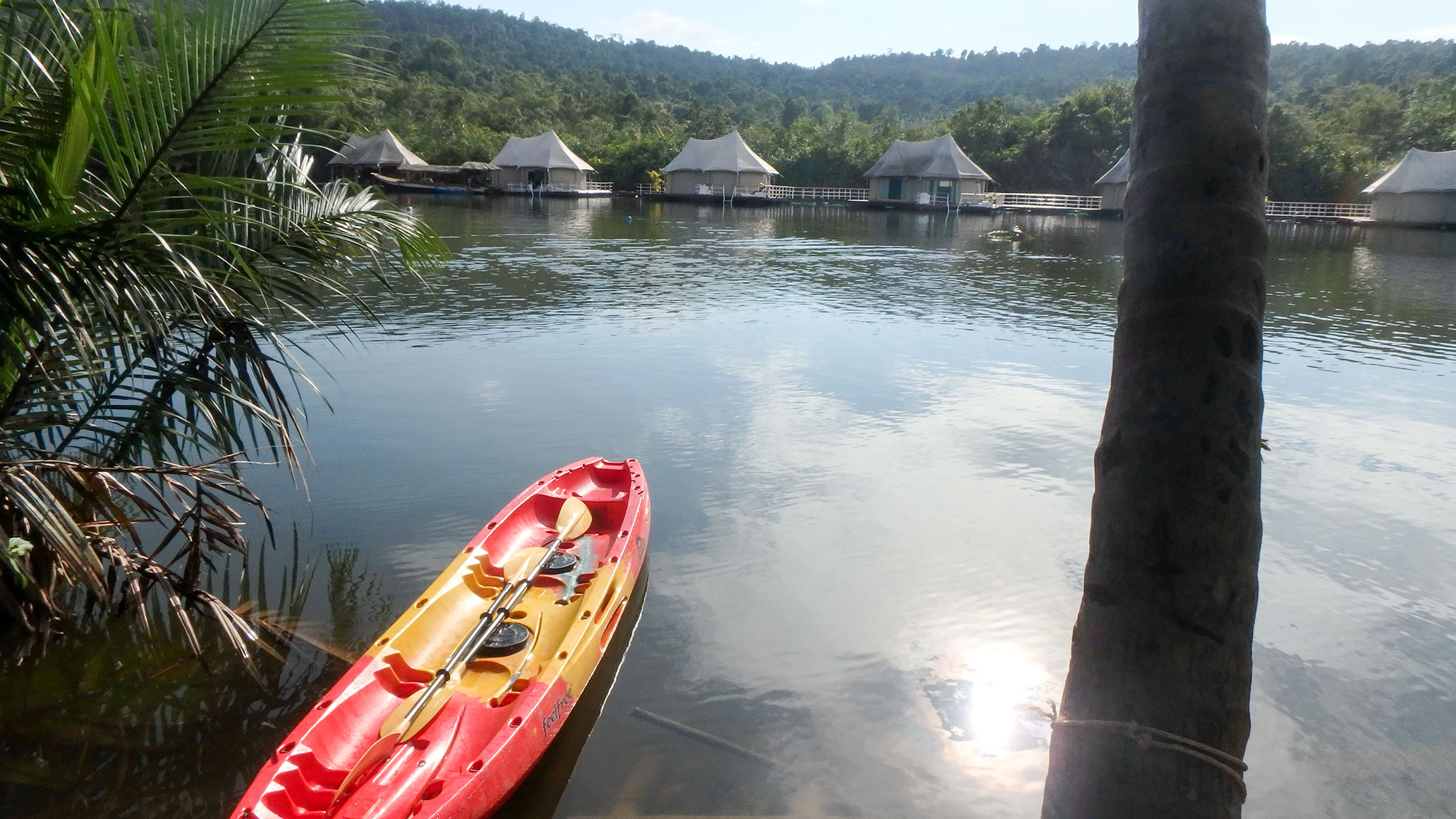 We also enjoyed a bottle of pinot noir while watching an unexpectedly spectacular sunset. 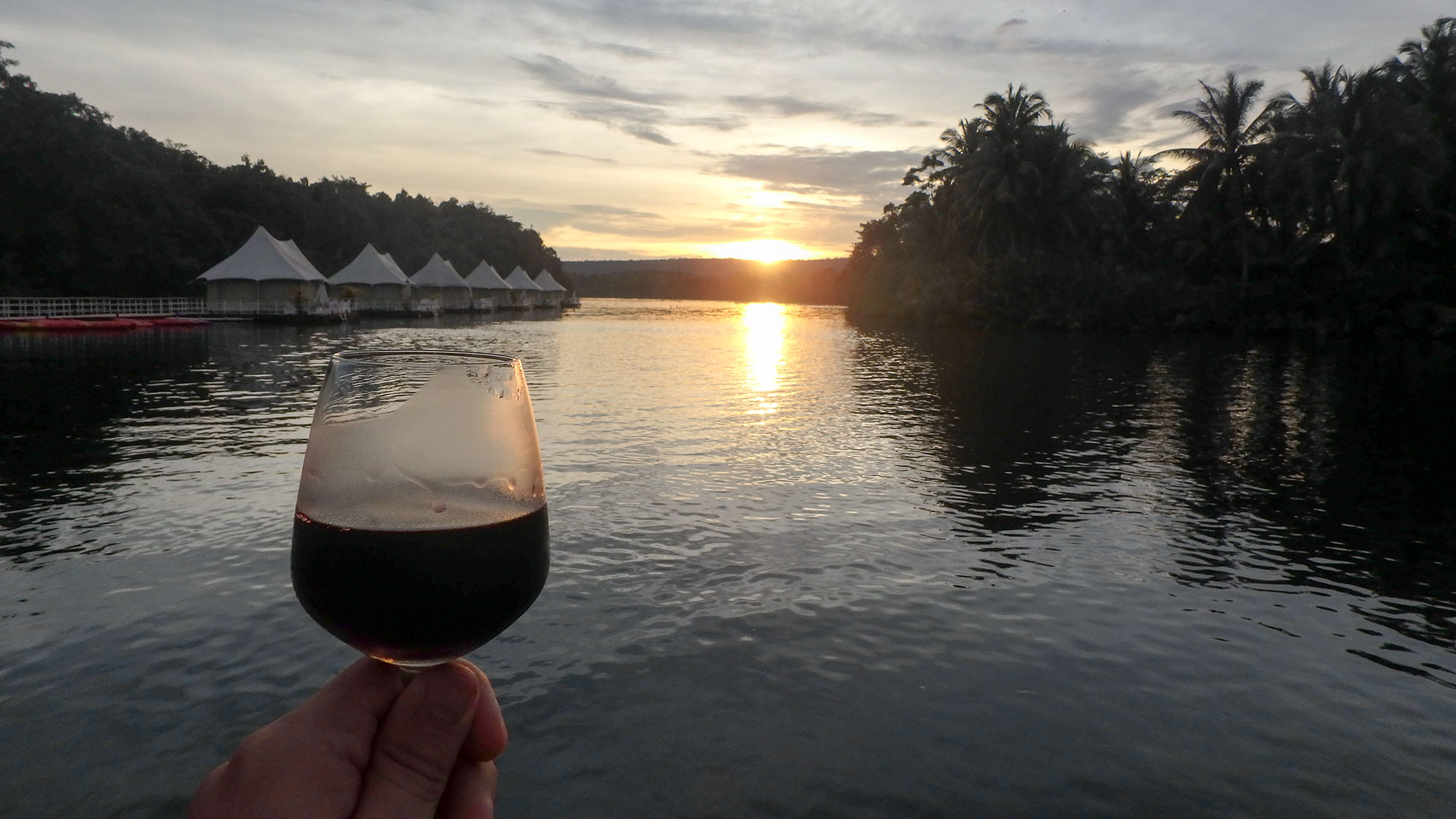 The next morning, the river's beauty continued to amaze. The surface was like a polished mirror, covered in fog which had snaked its way down from the highlands. While we rose, the land fog began its retreat from the heat of the rising sun.

After a morning swim and breakfast, we set off on one of 4 Rivers' many nature excursions. We chose to visit the Tatai Waterfalls. Sambo, a local Khmer guide employed by the lodge, took us up the river. 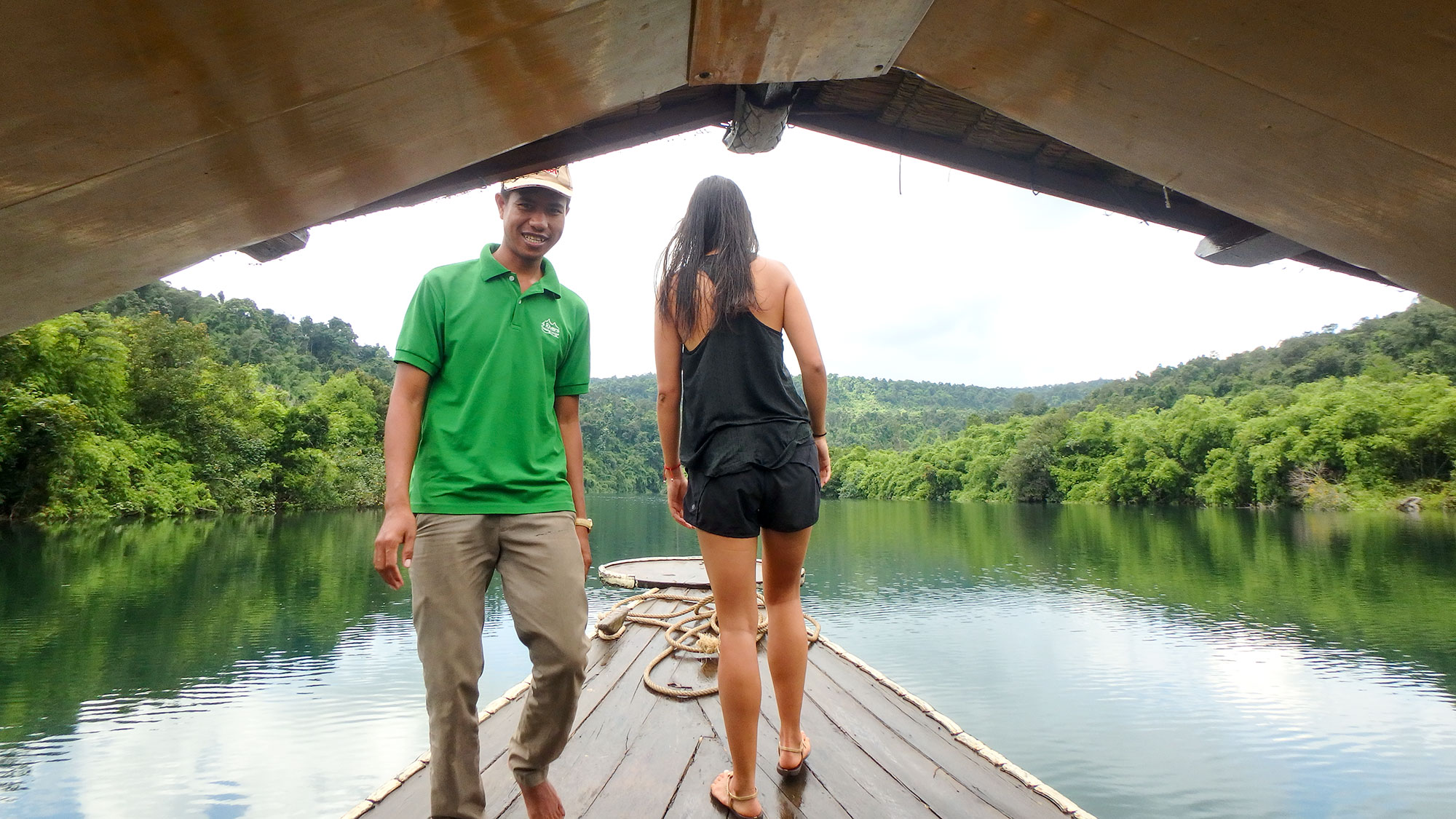 Once there, Sambo immediately showed us the hidden climb up the slippery rocks and through rushing water to the top of the falls. 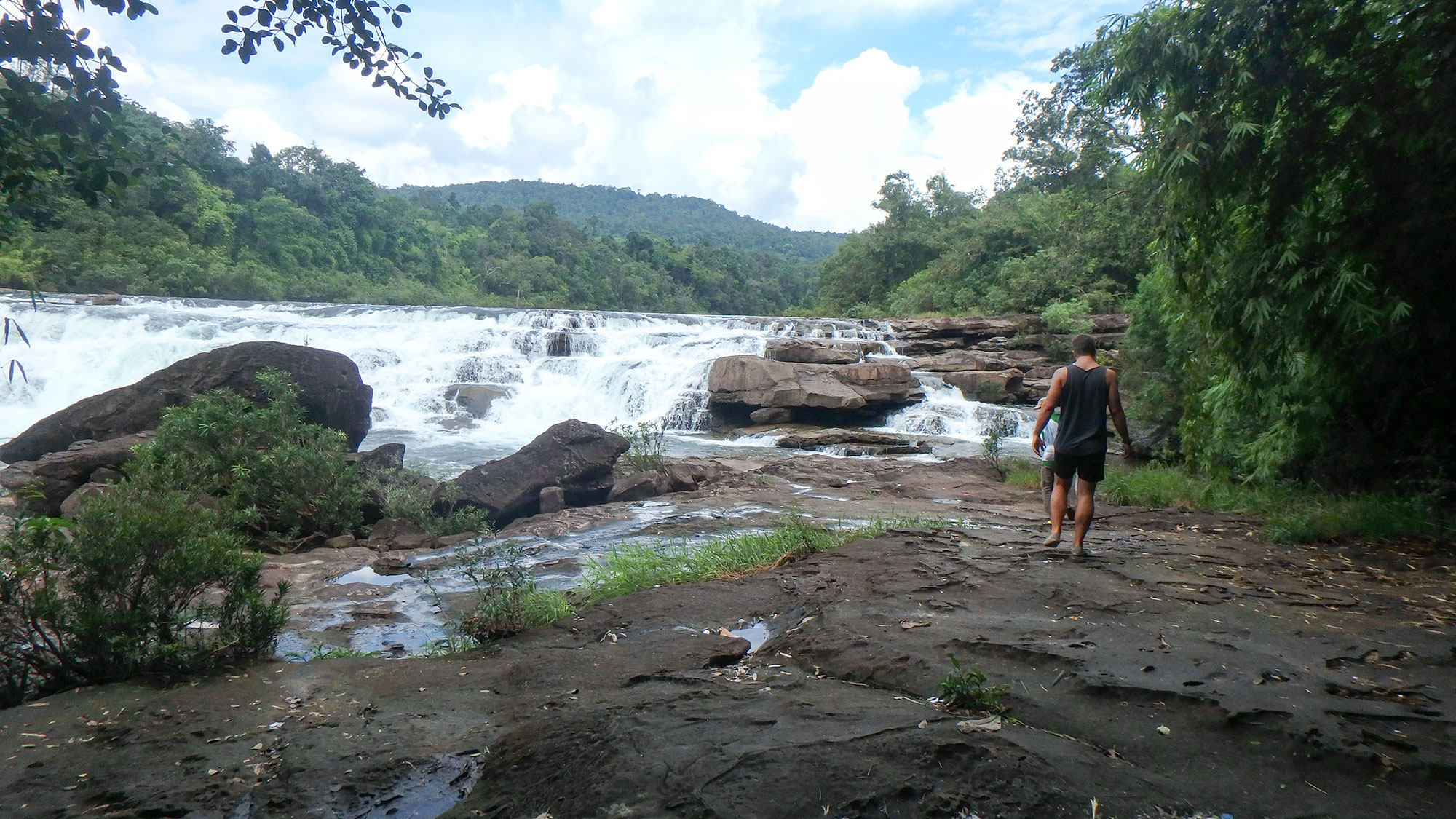 He wasted no time demonstrating how to properly jump off. 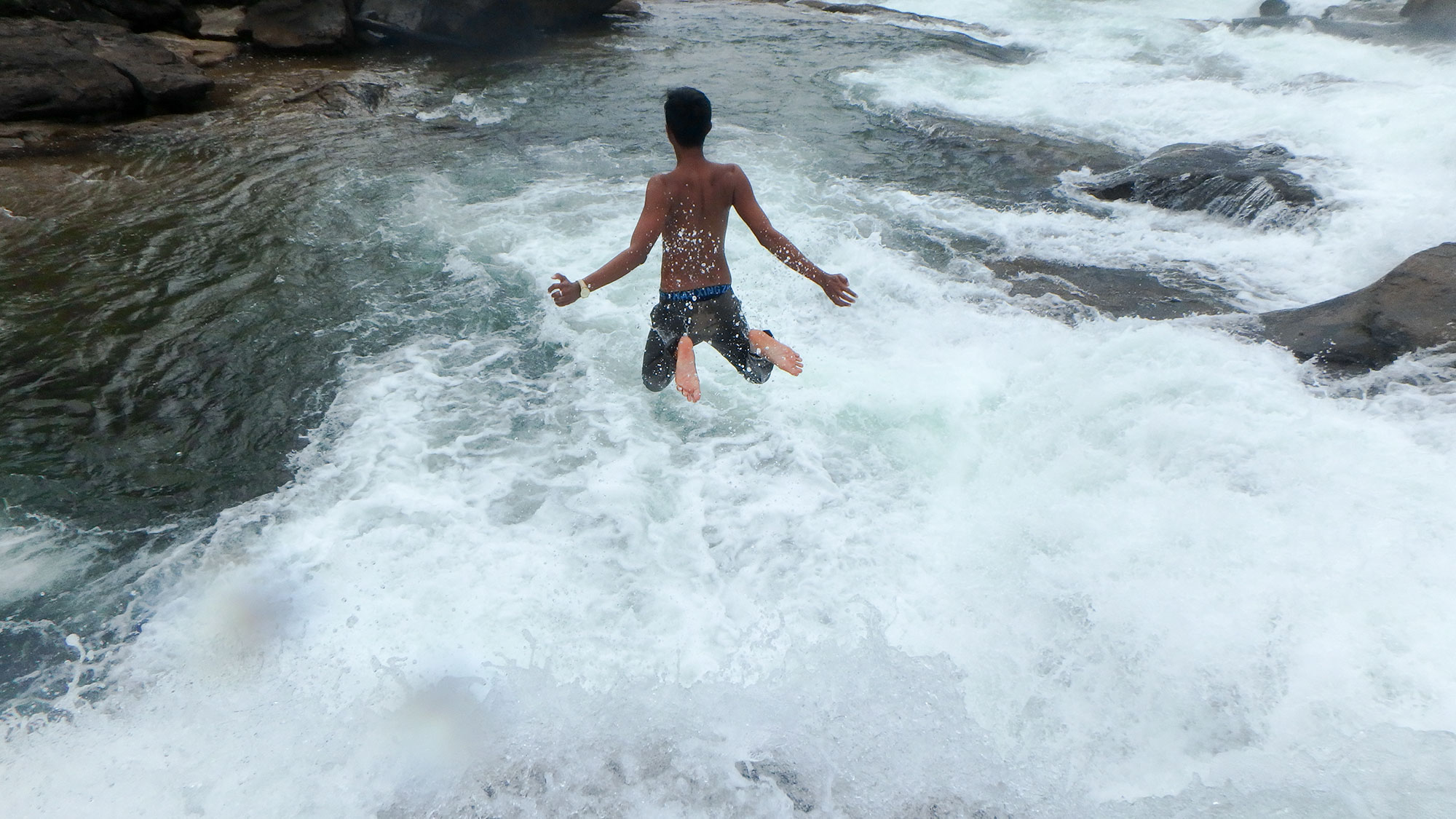 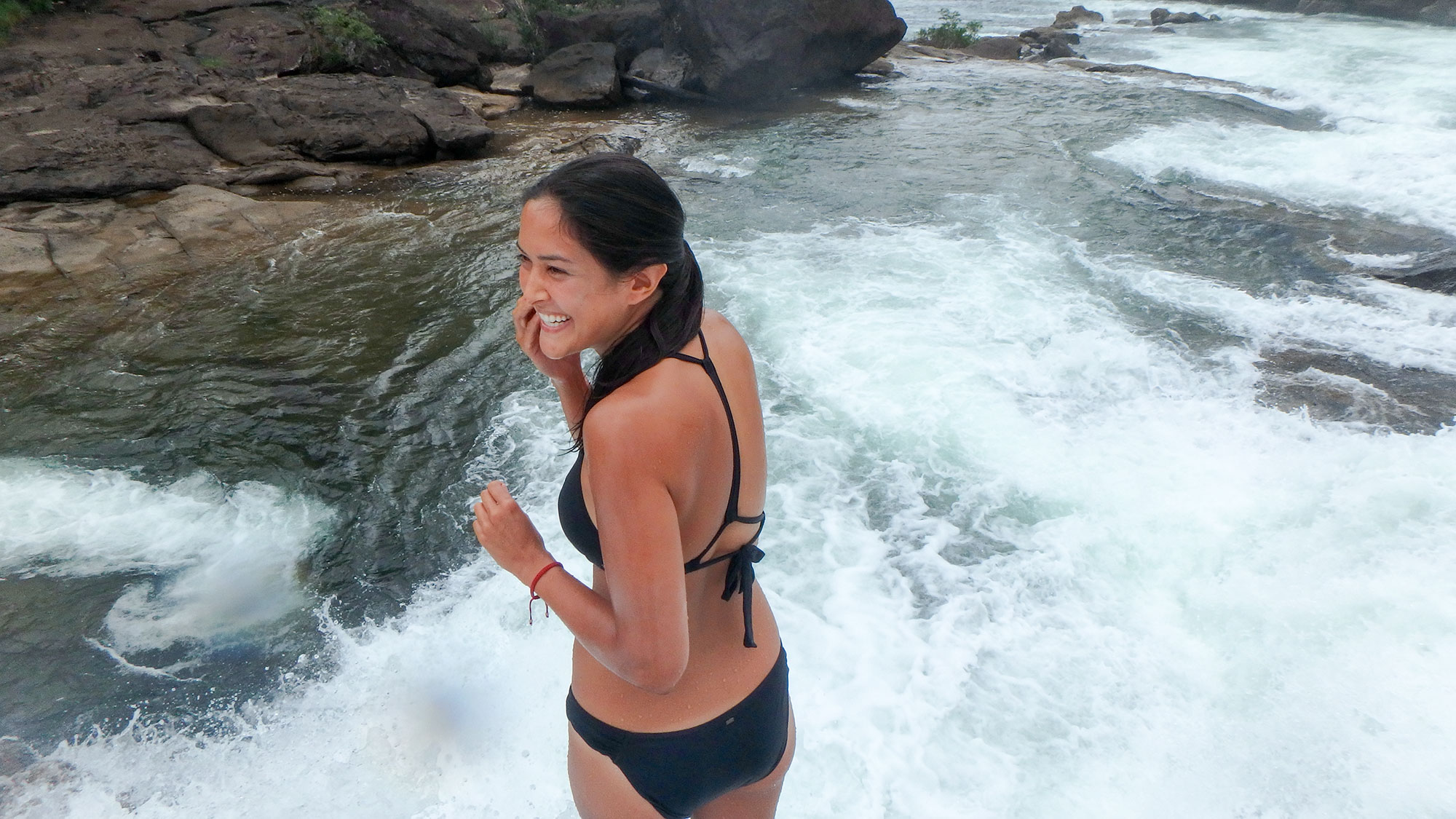 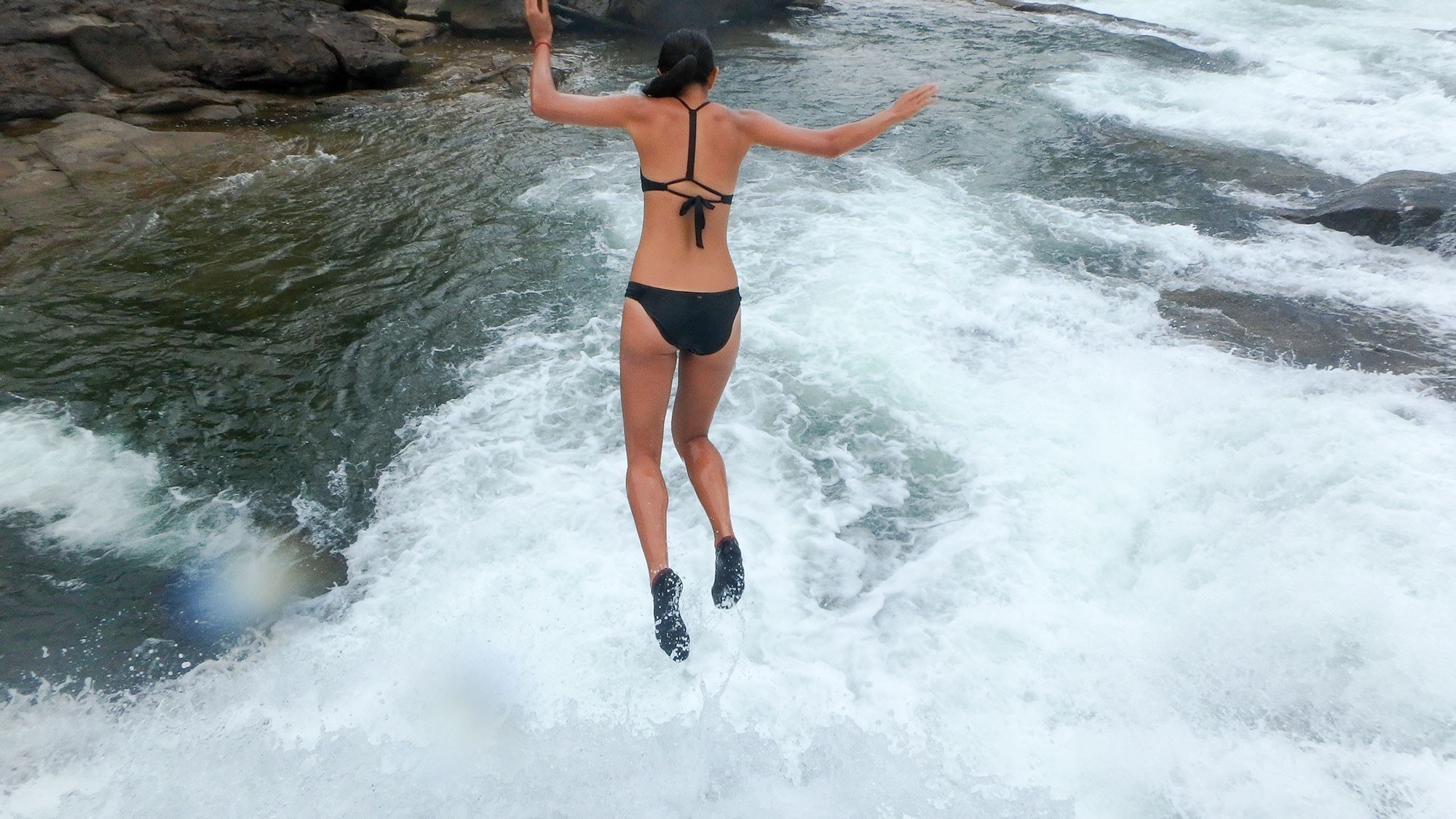 Once I let her test the depth, it was my turn. 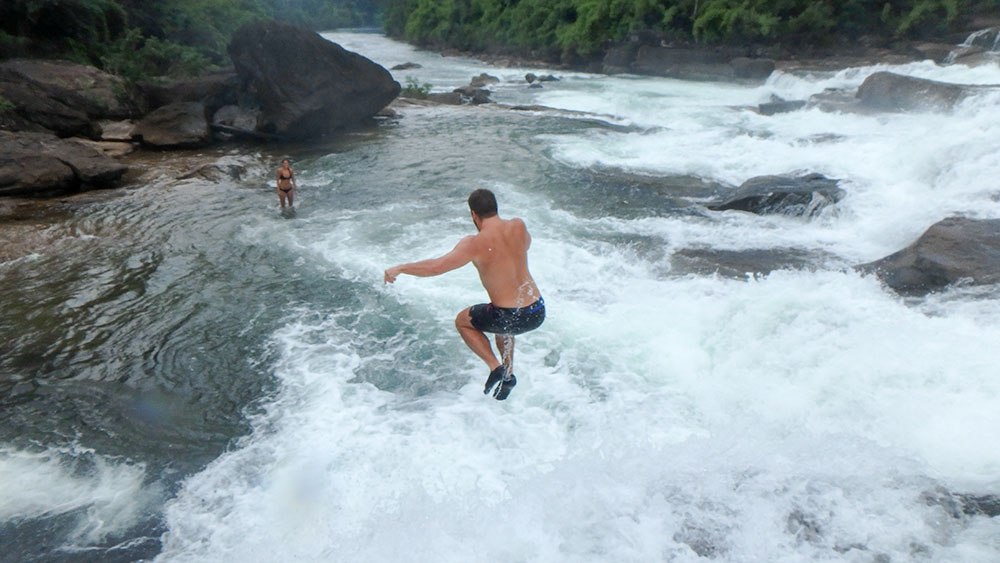 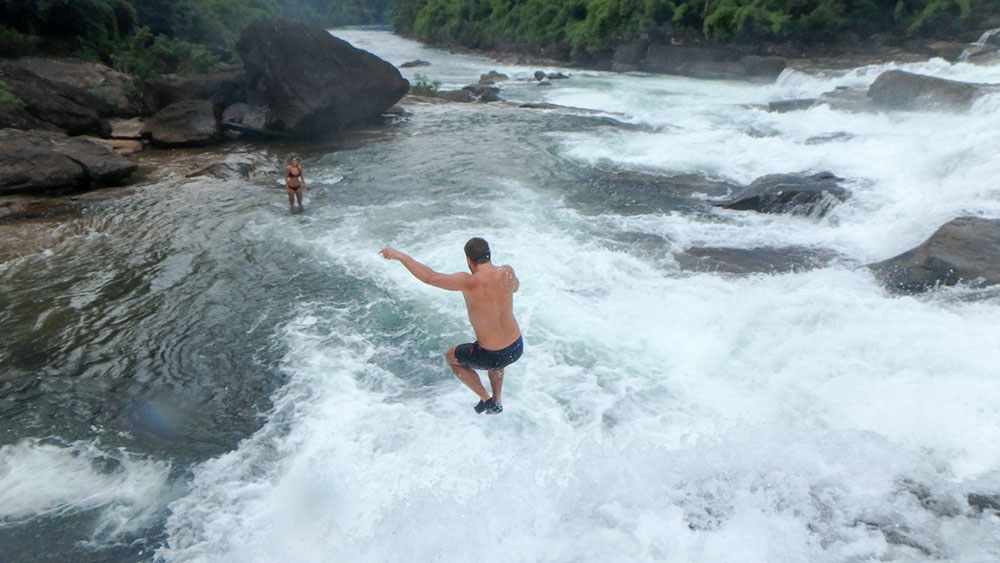 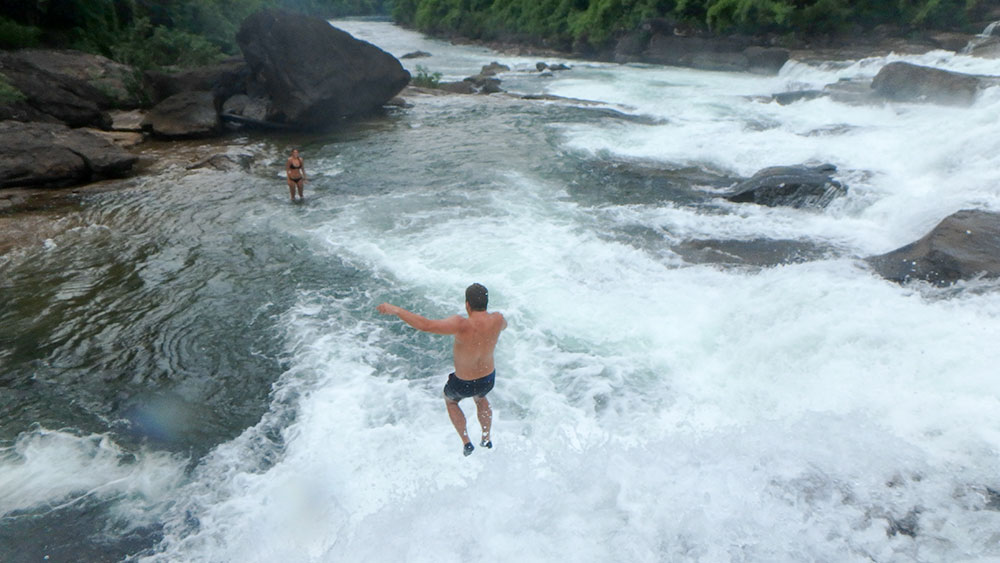 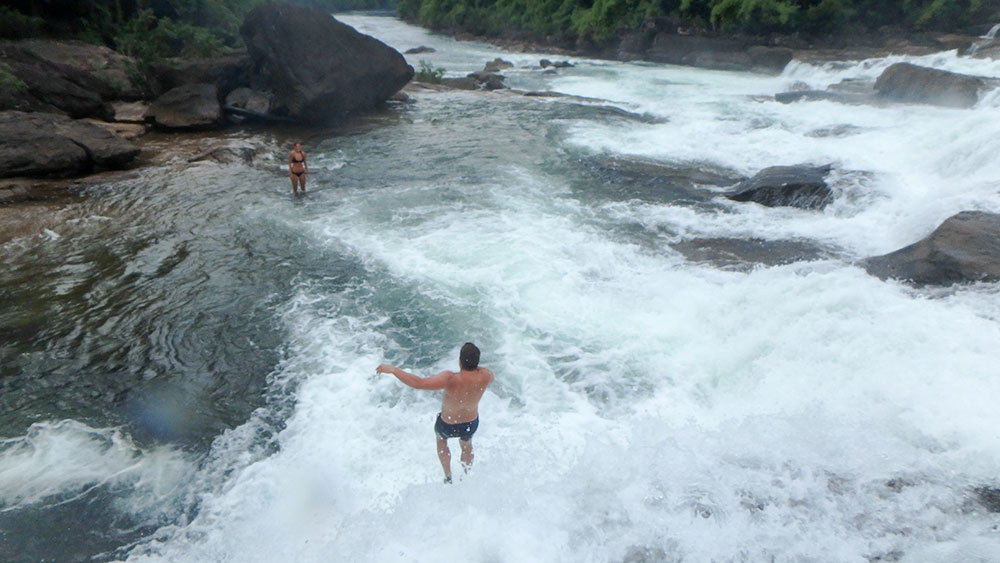 We spent the rest of the afternoon exploring the falls, eating a picnic lunch, and kayaking back down the river. Among Sambo's many talents, we learned he's also a candid photographer when we discovered these shots on our camera afterwards. Thanks Sambo. 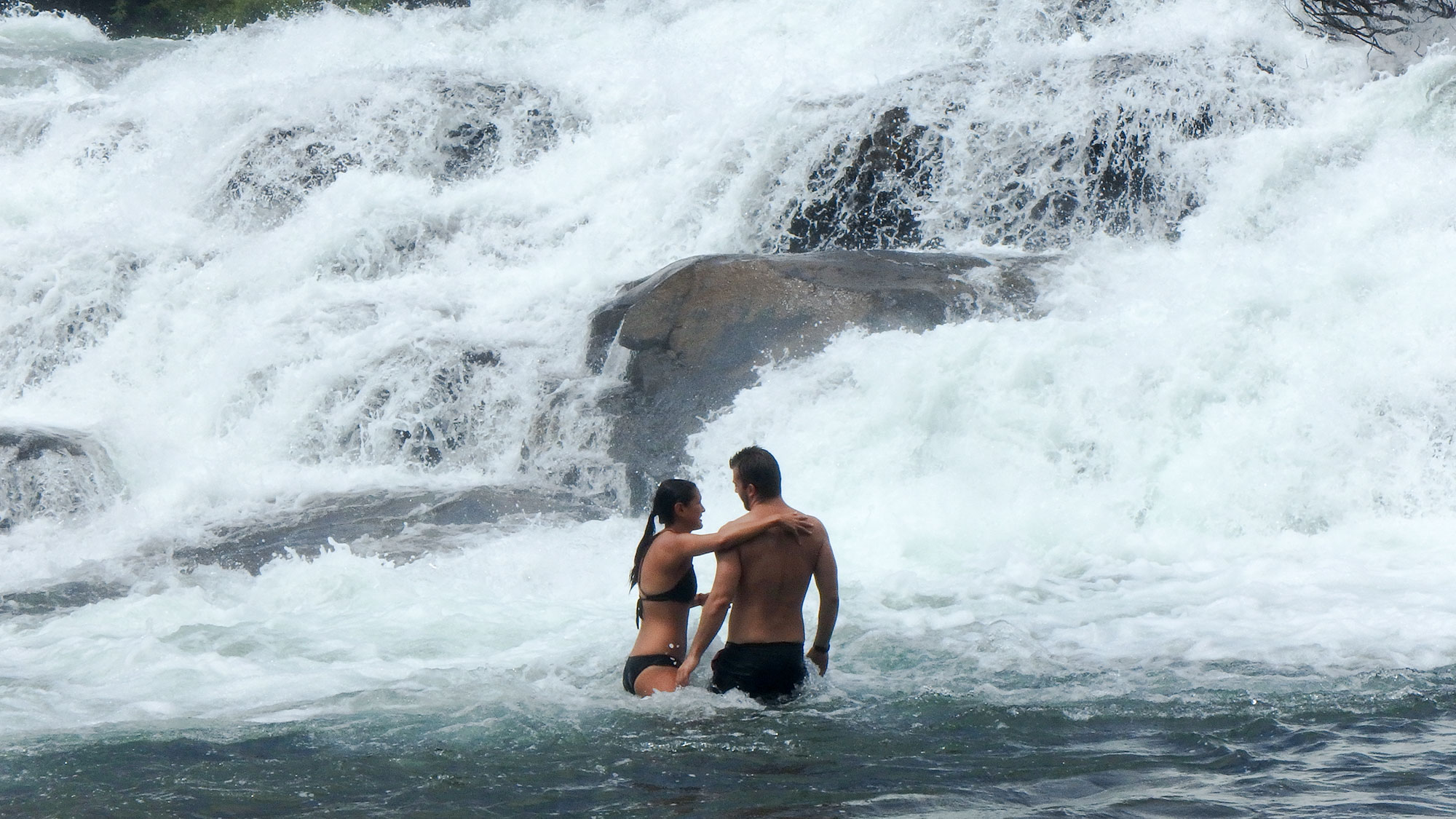 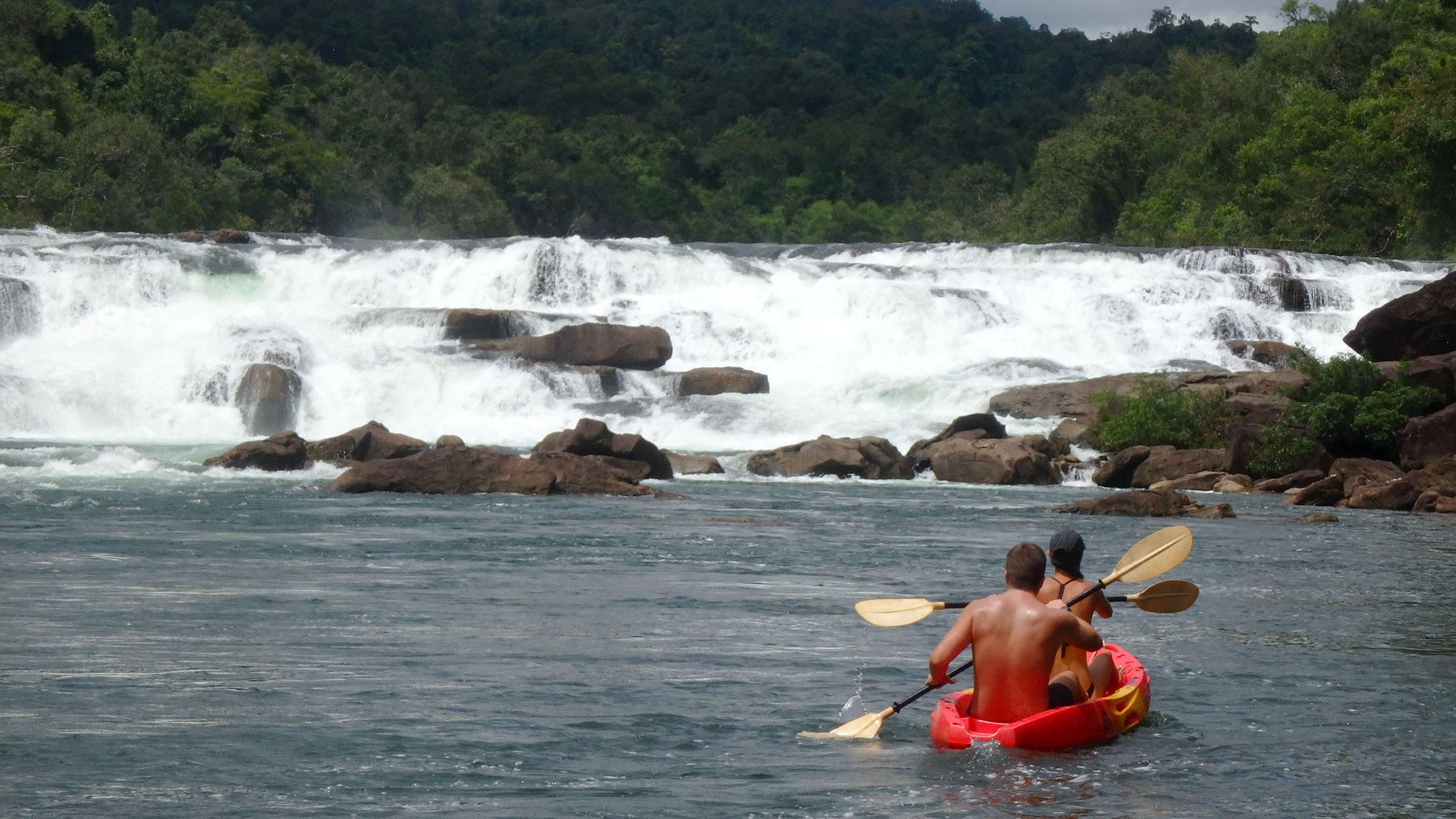 The waterfalls were stunning and our kayak ride further added to a connection we were starting to feel with the river. To passersby, the river might be overlooked as a mere geographical feature blended into the overall landscape. Once you get up close and personal, however, it becomes clear that the river is the source of life for everything in its path. It is the backbone for a way of life practiced by the locals for hundreds of years.

This was one of the surprises of 4 Rivers Floating Lodge. I honestly thought we'd find the "floating" aspect of the resort to be a gimmick — just a cool way to differentiate from other glampsites and ecolodges. But it's so much more than that. By floating, you are authentically connected to the river: the cradle of life in this part of Cambodia.

In talking to Sambo and the rest of the staff, I began to understand that 4 Rivers accomplishes this connection in a sensitive manner, protecting the environment, instead of exploiting it. This is, in my opinion, the most impressive accomplishment of 4 Rivers. Unlike typical destination resorts, which purposefully isolate themselves, 4 Rivers has integrated into the community and generated remarkably positive effects on the locals and the environment.

Sambo was literally a hunter-gatherer before 4 Rivers. Now, thanks to the lodge, he and many other locals speak fluent English and hold an unusually progressive view towards protecting the environment. No longer just a natural resource, they want to preserve the environment for the future. For example, we were impressed as we noticed Sambo quietly collecting litter left behind by other shortsighted locals while we climbed the waterfalls.

Perhaps the old aphorism should be rephrased in 4 Rivers' example: if you build something special, they will come.